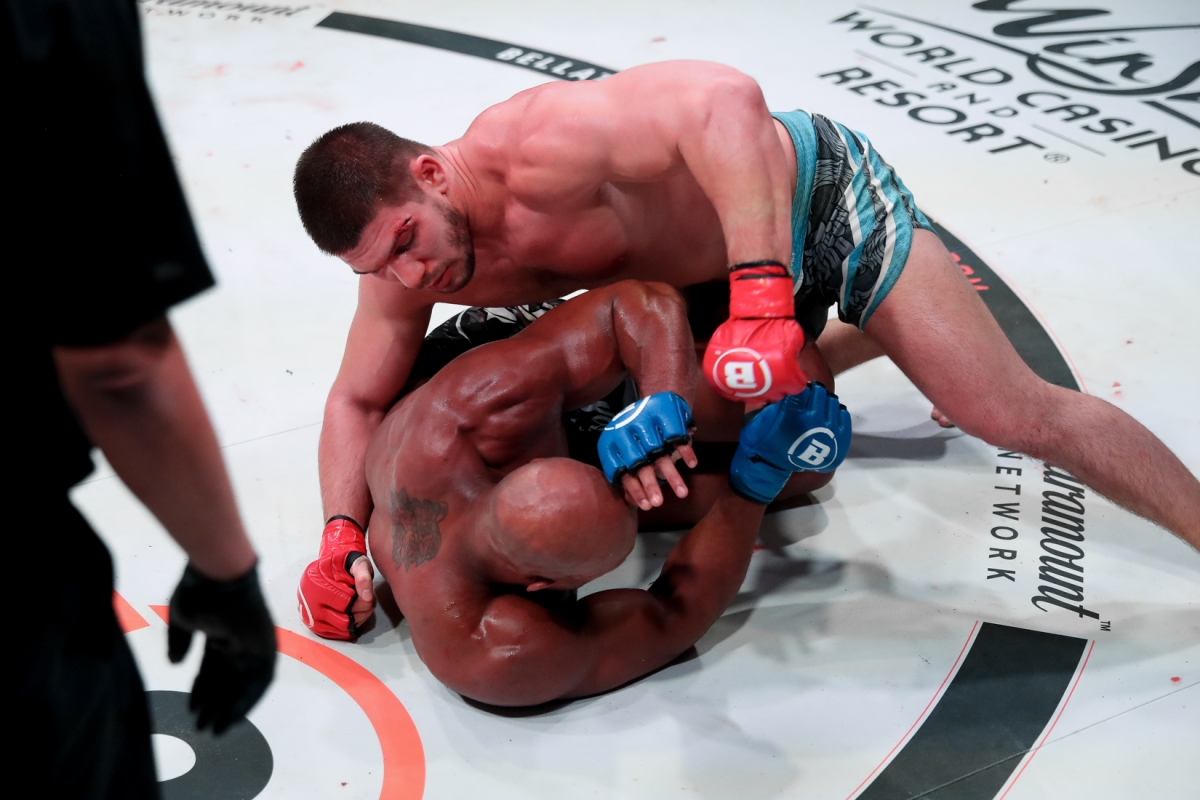 Bellator returns to the Footprint Center in Phoenix, Ariz. for their 2022 debut on Saturday, Jan. 29. Bellator 273 currently features eleven bouts, including Benson Henderson, Sabah Homasi, Islam Mamedov, Darrion Caldwell, and more. With 2022 just beginning, every fighter has the opportunity to come out swinging and start the year off right.

In the headliner, Valentin Moldavsky looks to trade in his interim championship to become the undisputed champion. Before doing so, Moldavsky must dethrone the current heavyweight champion, Ryan Bader.

After losing devastatingly last time out, Bader comes into this fight with the need to get a win and defend the heavyweight title. Meanwhile, Moldavsky is 6-0 in Bellator and believes he deserves to be the heavyweight champion. Both fighters are smaller heavyweights who use their athleticism and cardio to win fights. Bader vs. Moldavsky has the potential to be an intriguing fight and completely change the future of the division.

In the co-main event, Henderson and Mamedov come into this matchup with opposite recent success. Henderson has lost his last three fights, and Mamedov won his last 18 fights. Mamedov comes in as a massive betting favorite, but Henderson’s experience could be the difference maker.

Also, Bellator 273 features other well-matched bouts, including Sabah Homasi vs. Jaleel Willis, Ben Parrish vs. Sullivan Cauley, Henry Corrales vs. Aiden Lee. The Bellator 273 festivities kick off at 7 p.m. ET on YouTube before moving over to Showtime at 10 p.m. ET for the main card. Check out the full preview and predictions below.

Ryan Bader has lost two of his last three fights, but still holds the Bellator heavyweight title; does he successfully defend that belt against Valentin Moldavsky?

Moldavsky went 6-0 in Bellator before beating Tim Johnson for the interim heavyweight title at Bellator 261. With light heavyweight in the past, Bader now focuses on preserving his title to prevent the younger fighters from taking over. Stylistically, both fighters are well-rounded, with grappling being their main strength. The difference will be the experience and age difference.

Bader still has some gas left in the tank, but his recent performances show a decline in progression. Bader’s durability has recently been an issue, even though that should not be an issue in this matchup. Moldavsky is a methodical fighter that tends to make few mistakes. Although he often wins by decision, Moldavsky has dominated his opponents in the past. Bader will need to use his experience to win this fight.

Moldavsky usually wins fights by controlling the pace and winning every exchange. Bader needs to throw more volume than usual and find a way to rack up control time. Finishing Moldavsky is unlikely, so Bader must use his experience to stick to the game plan and ensure he is winning each exchange. Overall, Bader has not looked to be the same fighter, and Moldavsky continues to evolve. Moldavsky should win by a dominant decision to become the undisputed heavyweight champion.

Former UFC lightweight champion Benson Henderson is on a three-fight losing streak; does he snap that trend by defeating the one-loss Islam Mamedov?

Benson Henderson has recently been on what some call “the skid.” After three straight losses to top talent, Henderson needs a win to rejuvenate his career. Getting that win against Islam Mamedov is easier said than done. Now that the Dagestani wrestling stereotype is well-known, you know what to expect from Mamedov. The question is, will Mamedov be able to drown Henderson to continue his win streak?

When fighting a Dagestani wrestler, providing pressure is the key to success. The problem is that Henderson has recently lacked that aggression, often accepting the counter style. Also, Henderson has phenomenal jiu-jitsu, but going to the ground against Mamedov is not recommended. Other than a potential submission, Henderson’s path to victory is limited, unless he walks down Mamedov. Henderson will most likely land punches off the counter before being cornered, taken down, and finished by Mamedov.

Featherweights Henry Corrales and Aiden Lee clash in a main card affair; which man comes away with a win and moves higher up the list of future title challengers?

After winning three of his two Bellator fights, Aiden Lee gets a step-up in competition. Henry Corrales has fought some of the best fighters in Bellator to build his 19-6 record. Corrales is a striker who tends to pick his shots wisely and go for the finish. Meanwhile, Lee has reliable adaptability and prefers to fight on the ground but can stand and trade. The difference may come down to who can control the pace.

Lee would love to get the fight to the ground, but Corrales has solid takedown defense that could stop that. If the fight stays standing, Lee strikes with more volume, and Corrales lands more significantly. If the matchup goes to the ground, Lee could get a submission finish. Lee has a bright future but lacks the experience Corrales has. Overall, Corrales should maintain distance and outstrike Lee to win by decision.

The sleeper matchup at Bellator 273 is Ben Parrish vs. Sullivan Cauley. Last time we saw Parrish, he shocked the MMA world with a first-round KO against Christian Edwards. Now riding that momentum, Parrish vows to do the same against another upcoming prospect.

Cauley is the protégé of heavyweight champion Ryan Bader. Holding a record of 2-0, Cauley has the potential to become Bellator champion one day. Will Cauley continue his journey to the top? Or, will Parrish shock the fans again and continue to destroy upcoming prospects?

What Parrish did to Edwards was not a fluke. Parrish is a tough fighter who has been training endlessly for his time to come. With fans now paying close attention, he must get another big win. Cauley is strong, aggressive, and maintains a wrestling base from his days at Arizona State University. We learned Parrish is down to throw hands, but what happens if the fight goes to the ground?

Before beating Edwards, Parrish had all of his wins come by submission – four to be exact. With that said, grappling with a former NCAA Division I wrestler is never a good idea. Cauley continues to evolve every fight, and should do so once again. His power has set up his takedowns, which ultimately lead to a finish. Cauley should take it slow, allow Parrish to make a mistake, and then take him down before getting a finish. To be fair, last time Parrish was underestimated, he turned a Bellator event upside down.