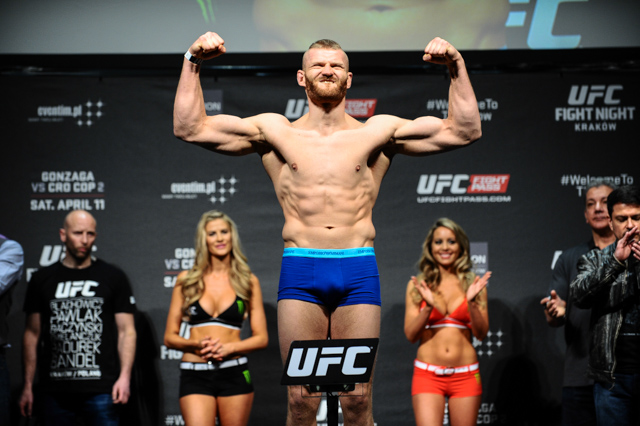 Will Jan Błachowicz Succeed as the Favorite at UFC 267?

UFC Light heavyweight champion Jan Błachowicz puts his title on the line this Saturday at UFC 267 against Glover Teixeira. In four out of his last five fights, Błachowicz entered the Octagon as the betting underdog. He emerged victorious on every single one of these occasions. Will he be able to succeed as the favorite this Saturday?

Six fights into Błachowicz’s UFC tenure, he held a promotional record of two victories and four defeats. He appeared to be on the verge of getting released from the UFC. The thought of the 38 year old becoming UFC Champion seemed extremely improbable at the time. Despite making incremental improvements in every fight from that point, the Polish fighter continued to be underestimated.

This was what transpired before his first title defense against Israel Adesanya at UFC 259 in March of this year. Adesanya was the undefeated UFC middleweight champion and was aiming to become a two-division title holder. The consensus amongst analysts was that Adesanya’s finesse would prove to be too much for the powerful, yet limited, Błachowicz.

Błachowicz was overlooked despite previously showing that he had technique in conjunction with significant power. His performance against Dominick Reyes was one of the best examples of this. Reyes had caused Jon Jones problems with his speed and timing and used excellent footwork to avoid receiving big strikes. Many believed that he had done enough to beat a man who is arguably the greatest fighter of all time. Błachowicz would proceed to make Reyes look average. He repeatedly hurt the California native while remaining technical and secured a knockout finish in the second round.

Despite this, Błachowicz was perceived to lack the refined striking skills needed to overcome a slick striker like Adesanya. The Pole would end up surprising the MMA world once more by defeating Adesanya. What was even more of a surprise was how he did this with a patient, technical approach. He neutralized Adesanya’s biggest weapons on the feet, parrying and blocking his jab, and he did an excellent job of checking kicks. He was also accurate with his own stand-up game and outstruck Adesanya throughout. Błachowicz turned to his wrestling in the final two rounds to make certain of his victory. He emerged with a unanimous decision win and handed Adesanya his first loss in MMA.

Błachowicz has thrived in the role of underdog. He has spoken in interviews about how he enjoys having a point to prove heading into fights. This has been a great source of motivation for him during his path to securing UFC gold. This weekend, against Glover Teixeira, he finds himself in the unfamiliar position of being the favorite. Teixeira competed for the UFC light heavyweight championship seven years ago against Jon Jones and was defeated. Following his defeat to Corey Anderson in 2018, his record showed that he had lost three of his last five bouts. Just when it seemed that he was past his best, the 42-year-old had a career resurgence. He is now on a five-fight winning streak and has climbed his way back to title contention.

In recent fights, Teixeira has shown an uncanny ability to recover after being hurt, and quickly rallying to secure finishes of his own. The fact that Teixeira has been vulnerable in these contests, combined with Błachowicz being dominant, the champ is unsurprisingly favored in this fight. Teixeira has always been tough to put away, but has recently learned how to quickly regain his composure after having perilous moments.

Błachowicz will have to be aware of the Brazilian’s durability. He will need to avoid over-committing and avoid tiring himself out. The champion will be confident that he can largely avoid Teixeira’s dangerous jiu-jitsu game due to his strong takedown defense. However, this will be rendered irrelevant if he is fatigued. This is something that Błachowicz has improved significantly over his career, but is likely to be tested to the limit on Saturday. Teixeira’s ability to finish fights on the feet and on the ground makes him arguably the most difficult stylistic match-up for Błachowicz in the division.

Teixeira has drawn his recent opponents into brawls, knowing that his superior durability and conditioning will help him persevere in this type of fight. Błachowicz takes great pride in his power, but will have to control his aggression to avoid giving his opponent the openings he is looking for.

Teixeira’s amiable personality and aggressive fighting style has made him a fan-favorite throughout his career. There seems to be a lot of goodwill towards him ahead of this bout, seemingly, due to it being one of, if not the, last chance for him to compete for a UFC title. Błachowicz still has a lot of support, but for the first time in a while, the fans may not rally around him in the way they have done in his last few outings. This is another change to the pre-fight dynamic that the Pole will need to adjust to.

Błachowicz’s time at the top of the sport has been largely spent away from the spotlight. His title-winning effort against Reyes was a co-main event to a title fight in a lighter weight class. Furthermore, the build-up for his first title defense against the aforementioned Adesanya was dominated by his opponent’s quest to become a two-division champion. The two biggest victories of his career came in front of no fans at the UFC Apex in Las Vegas. This Saturday, Błachowicz will be expected to win in the main event of a stacked card that will mark the UFC’s return to Abu Dhabi after nine months away. It will be intriguing to see how Błachowicz copes with this expectation on this big stage.

After beating Israel Adesanya at UFC 259 in March, Błachowicz felt that it was only then that he was legitimized as champion. Błachowicz was harsh on himself, considering that he beat Reyes in destructive fashion to capture the belt. Perhaps he was echoing the sentiment amongst some in the MMA community who felt that he wasn’t the best light heavyweight in the world, as he hadn’t beaten Jon Jones. A victory over Glover Teixeira at UFC 267 will not only be a reminder of Błachowicz’s supremacy at 205 pounds but will also propel him onto a list of all-time-great light heavyweights. Many fans and analysts expect Teixeira to fall short in his attempt to win the title on Saturday. Błachowicz knows better than most that this means little when the Octagon door closes.