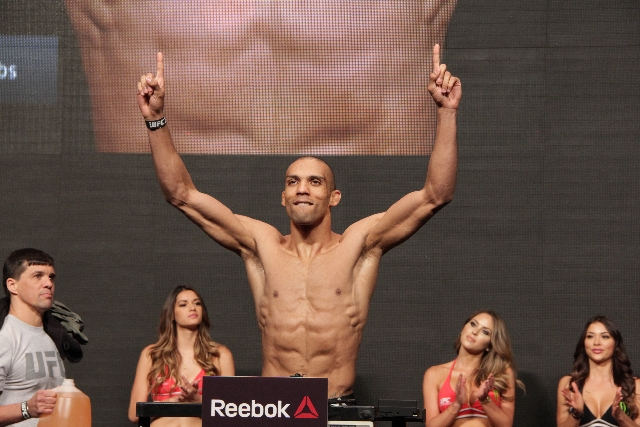 This weekend the 29th season of The Ultimate Fighter comes to a close as winners will be crowned in the bantamweight and middleweight divisions. Sitting atop the UFC Fight Night card is a featherweight showdown between UFC veterans Edson Barboza and Giga Chikadze.

Barboza was a longtime lightweight contender before making the move down a weight class where he has won his last two fights. Chikadze is yet to lose in the UFC, sporting a 6-0 record since joining the promotion. Both men have shown time and again that they can close the show with their strikes.

The co-main event will be between middleweight TUF finalists Bryan Battle and Gilbert Urbina. Urbina steps in on a week’s notice, replacing the man who defeated him in this season’s semifinals, Treasean Gore. Gore suffered a knee injury and was forced to pull out of the contest. Both Battle and Urbina come into this match-up with only one loss on their resume. Battle’s lone loss came in 2019 while Urbina’s sole defeat came against Sean Brady back in 2018.

The bantamweight final pits Team Volkanovski teammates Ricky Turcios and Brady Hiestand against each other. Turcios earned his place in the finale with a dominant decision win over Ludvik Sholinian. Hiestand, meanwhile, defeated Vince Murdock in the first round of their semifinal bout.

Also on the main card is a welterweight fight between former lightweight title contender Kevin Lee and Daniel Rodriguez.

UFC Fight Night: Barboza vs. Chikadze takes place inside the UFC Apex in Las Vegas. The card will kick off with the prelims airing on ESPN+ at 7 p.m. ET. The action culminates with the main card at 10 p.m. ET on ESPN and ESPN+. Combat Press writers Andrew Sumian and Matt Petela preview the action in this week’s edition of Toe-to-Toe.

The main event pits two of the featherweight division’s most prolific strikers against each other; which fighter comes away with a victory?

Sumian: Talk about a match made in heaven. The featherweight showdown between Edson Barboza and Giga Chikadze is a striking fan’s dream match-up. It has very little chance of not delivering one of the most entertaining and memorable main events in recent memory. Both of these strikers are agile, creative and diverse on the feet. They have proven time after time that anyone brave enough to stand against them risks being knocked out in spectacular fashion.

Despite suffering some damaging defeats throughout his lightweight campaign, Barboza’s move to featherweight has revived his career. His featherweight debut consisted of a back-and-forth brawl with Dan Ige where the Brazilian found himself on the wrong side of a split decision. Despite the setback, he bounced back with two fantastic performances against Makwan Amirkhani and Shane Burgos. Motivated to return to title contention, Barboza will have to successfully dismantle the hype and skill of the division’s most talented and dangerous striker in Chikadze.

Chikadze is on a hype train and for good reason. The Georgia native has been perfect in his UFC campaign which includes an undefeated 6-0 UFC record and back-to-back “Performance of the Night” awards. The lengthy, yet powerful fighter has caught the attention of fans with knockouts over Jamey Simmons and veteran Cub Swanson. Known for his striking, Chikadze has a lengthy kickboxing background and boasts an impressive 38-6 kickboxing record. The two-year UFC vet is as talented as they come. He will look to further climb the rankings of the division against Barboza.

It is difficult to imagine a scenario where this fight does not turn in a “Fight of the Night” candidate. Both take pleasure in picking their opponents apart on the feet before turning in a memorable finish. Expect both combatants to come out firing kicks from the opening bell. After it’s all said and done, it will be Chikadze who gets his hand raised and earns himself the most high profile win of his career. The younger and fresh contender will be one step ahead of his striking counterpart for the majority of the fight.

Petela: This really is incredible matchmaking. This clash is going to be fan-friendly and will display some of the highest level striking the MMA world has to offer. UFC fans finally got to see the famous “Giga kick” in Chikadze’s last outing. The crippling body kick stopped Cub Swanson in his tracks as it dug deep into his midsection. Combine that with the lightning-fast and ultra-devastating kicks of Barboza and it is hard to imagine this fight going the distance.

The best way to stifle the offense of either fighter is to take them down and make them fight off their back. Don’t expect to see that as both men are willing to trade strikes as long as the fight lasts.

The difference maker in this fight will end up being the leg kicks of Barboza. He has been utilizing leg kicks, to both the calf and the thigh, for years and has perfected the technique. He has stopped two opponents, Mike Lullo and Rafaello Oliveira, with leg kicks. While he won’t stop Chikadze with leg kicks, he will slow the Georgian kickboxer down enough to set up a finish. It could be a highlight-reel wheel kick or a perfectly-timed combination with his hands.

This vaults Barboza to the top of the featherweight division, a place he is accustomed to being at lightweight. The difference now is at a lower class, the fighters ahead of him don’t have an overwhelming grappling advantage — with the exception of Brian Ortega. This win will be a launching pad for Barboza as he makes his way towards a title shot at 145 pounds.

A number of contestants from this season of The Ultimate Fighter will make their UFC debuts this weekend; do any of these fighters have star potential?

Petela: The name that sticks out to me here is Gilbert Urbina. While he did lose by second-round knockout to Tresean Gore in this season’s semifinals, he will make the most of this second chance. Officially, he has only one loss on his resume, dropping a unanimous decision to rising UFC star Sean Brady. With only seven pro fights, he is still growing as a fighter. At 25 years old, he still has a few years before he reaches his physical prime. While it may take a while for him to get his footing on the big stage, ultimately he will become a name to watch.

As far as the rest of the incoming class, there may be a diamond in the rough or two, but in large part, this 29th season of TUF has been a case of “the best of the rest.” The show has largely run its course and is no longer the premier method of finding up-and-coming talent.

Sumian: Despite losing in the semifinals of the show, Andre Petroski certainly has the skill set to become a formidable UFC middleweight should he continue to improve. The 30-year-old New Jersey native is entering his prime and has a solid wrestling foundation. Should he prove victorious Saturday night, Petroski can position himself for a solid UFC career.

Sumian: It is impossible to imagine a reality where Sam Alvey gets to keep his UFC roster spot if he turns in another loss. That would give him an 0-5-1 record since September of 2018. The former top-15 light heavyweight has had an incredibly down few years in the UFC as he enters his 22nd promotional bout against Wellington Turman.

Turman himself is on thin ice after a 1-3 start to his UFC career. He has suffered back-to-back knockout losses. Alvey will need to capitalize with this striking and power to put Turman away and hold onto his UFC roster spot.

Petela: As my colleague stated, Alvey certainly has his back against the wall. And so does his opponent, Turman. This match-up has all the makings of an old school pro wrestling “loser walks” or “pink slip” match.

Petela: Dustin Jacoby vs. Darren Stewart. Jacoby’s last fight was incredible. He rallied from being hurt early to earn a draw against Ion Cutelaba. Stewart has struggled recently, but he has crazy power in his hands. If he is able to connect early, it could be the beginning of an instant classic against someone as durable as Jacoby.

Sumian: The welterweight match-up between Kevin Lee and Daniel Rodriguez could arguably headline a Fight Night by itself. Despite a rocky couple of years, Lee is certainly one of the more recognizable names in the UFC. His skill, trash talk and personality are must-see TV. Pair that with the rising Rodriguez who is 5-1 since joining the UFC and you have yourself one heck of a fight. These two will put on a memorable back-and-forth brawl.

Sumian: Sam Alvey. The light heavyweight will earn his first professional victory since 2018 when he stuns Wellington Turman early and delivers one of the most memorable knockouts of his career. Alvey has proven throughout his career he is as tough as they come. He will hold onto his UFC roster spot a bit longer on Saturday night.

Petela: Daniel Rodriguez. “D-Rod” has looked incredible in his last two fights with a dominant unanimous decision victory over Mike Perry and a first-round stoppage of Preston Parsons. He will continue to show that he is ever-evolving as a fighter. Look for him to thwart the wrestling of Kevin Lee before closing the show with his top-notch boxing. An eye-popping knockout over a big name like Lee will be more than enough to earn Rodriguez his second post-fight bonus.

Petela: Happy Days. Specifically the episode where Fonzie jumps the shark. That is exactly what has happened to The Ultimate Fighter. It has gone from becoming a novel concept that catapulted the sport into the mainstream to a retread and shadow of its former self. Over the years the show has become more gimmicky as it looks to retain viewers while being outpaced by Dana White’s Contender Series.

Sumian: The cult classic Enter the Dragon starring Bruce Lee. While Barboza and Chikadze are certainly a step behind the late Lee, they are as close as they come to putting on an epic battle worthy of the big screen. Expect pure entertainment when these two trade using a variety of kicks and punches that will have fans cheering for more before the night is through.