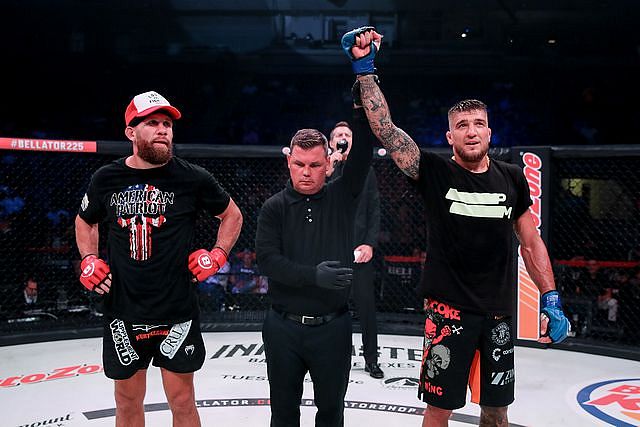 It’s rare to see a mixed martial artist with more than 20 wins and no losses. It’s even less likely to see such a fighter who has maintained this pristine mark while competing at the highest levels. Fedor Emelianenko is perhaps the only example that most fans could name. Well, it might not be long before Bellator 239 headliner Yaroslav Amosov adds his name to this extremely short list.

When Amosov steps into the cage at the WinStar Casino in Thackerville, Okla., for Bellator’s latest numbered offering, he’ll do so with 22 fights under his belt and not a single defeat on his record. Three of the Ukrainian’s victories have come with his current employer, and he’s topped two UFC veterans and a Bellator mainstay during this stretch. Now, however, he gets his most difficult test yet. If he survives unscathed, he’ll have put an entire sport on notice.

Ed Ruth has other plans. The decorated college wrestler didn’t climb through the same regional scene where Amosov cut his teeth. Instead, the 29-year-old was a member of a collegiate wrestling class recruited for immediate entry to Bellator upon their respective pro debuts. He made good on Bellator’s gamble by winning six fights against increasingly better competition over the course of his first two years with the company. He stumbled only once, while taking on Neiman Gracie in a welterweight-tournament bout. “EZ” has since bounced back with two more victories. He’d like nothing more than to hand Amosov the first loss of his professional career.

The welterweight headliners top a card that also features down-on-their-luck lightweights Brandon Girtz and Myles Jury. Both men badly need a victory to propel them back toward the contenders mix in the 155-pound weight class. Girtz has been plagued by injuries in recent years, but he did score a decision win over Saad Awad in his only appearance of 2019. Jury, meanwhile, enters this affair on the heels of three losses, including a setback against Benson Henderson in his promotional debut.

The four-fight main card’s remaining bouts will be contested in the heavyweight division. In the opener, Russia’s Valentin Moldavsky squares off with Javy Ayala. Then, Bellator blue-chipper Tyrell Fortune tests himself against UFC veteran Timothy Johnson.

The action, which takes place on Friday, kicks off a weekend doubleheader for Bellator that concludes in Dublin, Ireland, one day later. Bellator 239 gets underway at 7 p.m. ET with the preliminary card on Bellator.com. The main card goes live at 9 p.m. ET on the Paramount Network and DAZN.

Will Yaroslav Amosov extend his perfect mark to 23-0 when he meets Ed Ruth in the evening’s main event?

The last numbered Bellator event played host to the first loss for Ádám Borics, another Bellator phenom with a double-digit win total. Amosov, like Borics, has been seemingly unstoppable. However, he, just like Borics, is headed into a fight with a very solid talent across the cage from him.

Ruth, a three-time NCAA Division I national champion wrestler out of Penn State, is a rising welterweight contender for the organization. He’s used those wrestling chops and a healthy dose of ground-and-pound to put together an 8-1 mark that includes wins over Ion Pascu, Andy Murad, Kiichi Kunimoto and Jason Jackson. The Bellator lifer suffered his only loss via submission against Neiman Gracie, a fellow undefeated fighter at the time who came up short in a subsequent title bid against Rory MacDonald.

There’s a difference between Borics and Amosov, though. The Hungarian, who finally lost when he clashed with Darrion Caldwell in January, had recorded his biggest wins against Pat Curran, a former Bellator champion who is now miles out of the title picture, and Aaron Pico, a super-prospect who is just starting to find his footing in the pro ranks. Amosov, on the other hand, has bested Gerald Harris, Erick Silva and David Rickels. That’s no trinity of champions, but it’s a formidable set of opponents that can all play gatekeeper to a rising prospect if that prospect isn’t the real deal. Amosov also squeaked by one of the KSW’s best fighters when he took a split nod over Roberto Soldić in 2016.

Amosov does appear to be the real deal. His big struggle in this fight will be overcoming the size of Ruth, who stands two inches taller than the 5-foot-11 Ukrainian and enjoys roughly a four-inch reach advantage. The 26-year-old Amosov is an equal-opportunity finisher who has put away eight opponents via strikes and 10 by way of submission. Ruth, on the other hand, has only scored knockouts and TKO finishes. As long as the three-time sambo world champion can avoid getting planted on his back on the mat and pounded with punches, he has a good chance of winning this fight. He has a more rounded skill set than Ruth and could catch the wrestler in a submission, just as Gracie did.

Lightweights Brandon Girtz and Myles Jury meet in the co-headliner. Will Jury snap his three-fight skid in this one?

Neither of these fighters has had much to celebrate in the last couple of years. Girtz has struggled through numerous injuries while only fighting twice since the start of 2018, and he’s won just two of his last six fights. Meanwhile, Jury has won just two of his last seven contests, leading to his UFC departure and including a defeat in his Bellator debut. They’re both desperately in need of a win to change their fortunes in 2020.

Again, the theme here is strength of schedule. Jury has lost a majority of his outings since 2015, but those setbacks came against Donald Cerrone, Charles Oliveira, Chad Mendes, Andre Fili and Benson Henderson. Cerrone and Oliveira reside inside the UFC’s current lightweight top 15, Mendes has suffered all of his losses to members of the elite, Fili tends to lose only to contenders, and Henderson is a former UFC champ. Girtz’s recent string of losses includes Fernando Gonzalez and Derek Campos. Those guys aren’t horrible, but they’re definitely not in the same league as Cerrone, Henderson, et al.

Girtz is confident that he’s going to win this fight, but he’s fighting a guy who once went on a six-fight winning streak in the UFC that included decisions over Michael Johnson and Diego Sanchez. Jury will press the pace and hunt for another knockout to add to the nine he has already accumulated. Girtz will make this a competitive fight, but he’s in for a tough start to the year.

The heavyweight fights — a showcase for the up-and-comers or the veterans?

If Bellator head Scott Coker and company get their wish, it’ll be a showcase for rising talents Tyrell Fortune and Valentin Moldavsky.

Fortune draws UFC vet Timothy Johnson. The 34-year-old Johnson has yet to win under the Bellator banner, but he’s thus far been paired with Cheick Kongo and Vitaly Minakov. He does have spoiler abilities — just ask Shamil Abdurakhimov or Marcin Tybura about that — but he’s only won three of his last eight contests. The 29-year-old Fortune is another wrestling prodigy who has been groomed by Bellator since the beginning of his pro MMA campaign, and he has impressed with big wins over Rudy Schaffroth and Azunna Anyanwu. This fight with Johnson is the next logical step as Fortune climbs the Bellator heavyweight ladder. Unless he does something remarkably stupid, Fortune should prevail here.

Moldavsky is in more danger. The Russian has been paired with the very scrappy Javy Ayala. Fans will best remember Ayala for his huge finish to spoil the Bellator debut of Sergei Kharitonov. The 31-year-old parlayed that 16-second fireworks display into some high-profile affairs, but he found little success in those encounters. He was decisioned by Roy Nelson and knocked out by the aforementioned Kongo before scoring a knockout of his own over Frank Mir. The big man has been eyeing a fight with Minakov, but it has fallen through on two occasions. All it takes is one punch for Ayala to ruin an opponent’s day, and he’s arguably the toughest fight yet for the 28-year-old Moldavsky. In terms of skills, the combat-sambo specialist should have the upper hand against Ayala. However, if Ayala lures him into a brawl, this could be another star turn for the scrappy vet.

The relevant heavyweight action even trickles down to the preliminary card, where Steve Mowry is slated to meet Rudy Schaffroth. These two big guys have combined for 13 pro victories and just one loss, which came when Schaffroth collided with Tyrell Fortune.

Mowry is still undefeated through seven outings, but it’s his finishing rate that makes this into a compelling fight. The 6-foot-8 heavyweight has never seen the scorecards. He has recorded five submission victories and two knockout finishes. The 27-year-old has only needed more than one round in three contests. He’s been responsible for the first loss on the records of four previously undefeated opponents and two rookie competitors.

Schaffroth has been equally prolific in the stoppage department. The wrestler out of Team Quest had ended all of his wins in the first frame before running into Fortune. He’s rarely needed more than three minutes to get the job done. He will give up four inches in height to Mowry, but only one inch in reach.

This fight could be bonkers if those finishing rates are any indication. Schaffroth’s chin could be his undoing, however. He went just 6-2 as an amateur — Mowry was a perfect 7-0 at that level too — and suffered those two defeats via knockout. Mowry prefers submissions, but he’s likely to spark the finish, submission or otherwise, by first dropping Schaffroth with his fists.