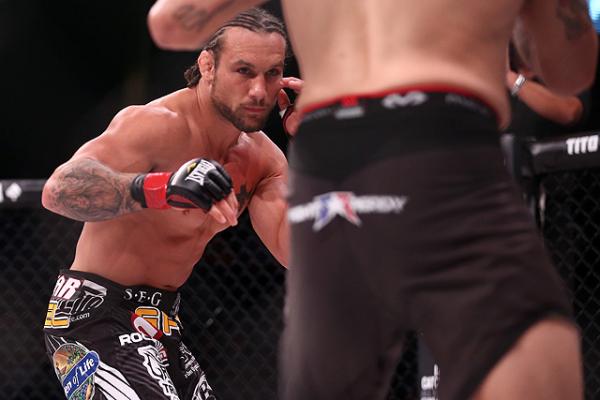 It’s hard to stay focused on a career when you’re constantly faced with setbacks. How someone deals with adversity is what separates the amateurs from the professionals.

Mixed martial arts is a physically taxing game. As the levels of competition increase exponentially with every year, so do the possibilities of injury. If fans think it’s a bummer when a fighter suffers a late injury, imagine how the guy feels whose livelihood depended on that fight and the paycheck that was to come with it.

Bellator veteran Brandon Girtz has had a rough go over the last few years. From his pro debut in April 2008 through December 2017, he typically fought two to three times a year while racking up a 15-7 record along the way. However, a series of injuries has limited him to just two appearances in the cage since then. The most recent couple of injuries came at some of the most inopportune moments.

At Bellator 197 in April 2018, Girtz faced former lightweight champion Michael Chandler in a headliner with title implications. In the first round, he fell awkwardly, separated his shoulder, and subsequently lost by submission. Chandler moved on and eventually won his belt back eight months later.

After nearly a year on the sidelines, Girtz returned to action and beat Saad Awad last March. He was back in the saddle and ready to string a couple wins together for the first time in four years. Then, just before his Bellator 227 bout with Jon Tuck last fall, injury struck again.

“I had a bicep tear two days before we were flying out,” Girtz told Combat Press. “So, I had to get surgery and had it reattached and go through all that. One of those annoying things, you know?”

The full-time fighter didn’t sit around and sulk. However, after his fight against Awad, he did have time to reflect on his prior performance, which, even with a win, was not entirely up to his standards.

“That was kind of a weird one for me, in a way, because I went in there expecting to take him out,” Girtz said. “That was my mindset the whole time. The game plan was going according to plan, and I’d seen the lights shut out in his eyes multiple times, and he just kept coming back like the Terminator. It was a weird one for me, and for some reason, I didn’t take it well for a while. Months later, I was able to see that I was able to come back from another injury and fight a war like that against someone I was looking to put away, and he was looking to put me away. I had to look at the positive.”

Girtz’s mind was in the right place going into the fight with Tuck, but his body took some damage that kept him out of the cage once again. Luckily, after the recovery process was complete, Bellator gave him another fight. That bout takes place on Friday, Feb. 21, in the co-main event of Bellator 239. Girtz locks horns with UFC veteran Myles Jury.

“I actually asked for that fight,” Girtz revealed. “They gave it to me. I love the match-up. He’s a good name, and I just want to take him out. Match-up-wise, I’d say I’m his worst nightmare. He doesn’t really like a fight that gets brought to him. He’s more of a point fighter and likes to keep you at range. He likes to do some fancy stuff with that. As we’ve seen in the past, when he fought another Colorado guy — Donald Cerrone — when the fight is brought to him, he doesn’t do as well with it.”

Girtz trains in Cerrone’s old stomping ground of Denver. While his primary coaches are Jake Ramos and Luke Caudillo at the Genesis Training Center, he also has the opportunity to spar with the Elevation Fight Team. With a background in wrestling, plus training partners like Carrington Banks, Grant Neal, Justin Gaethje and Drew Dober, Girtz’s style is one of “go big or go home.” He brings the heat early and often. His upcoming opponent, who has a black belt in Brazilian Jiu-Jitsu, tends to be more of a finesse fighter.

The Minnesota native turned Colorado resident should be happy about the match-up, as it not only falls right into his wheelhouse, but it also puts him right on pace for his master plan in 2020. Two fights in over two years is a tough pill to swallow. Now, Girtz wants to get back to business.

“A big, big goal of mine for this year is to fight three times,” said the brawler. “In the last three years, I’ve fought once per year, because of injuries. So, I haven’t really been able to get a roll on. The last three years I’ve spent recovering from something. My big goal is to fight three times. I think after a couple more wins, I’ll be up there for a shot at the belt.”

Girtz had his chance to get a title shot just two fights ago, but an injury caused him to come up short. However, his sights are laser-set on getting back there sooner rather than later. There’s no reason why a couple wins won’t get him right back in position. This is especially true with a win over a guy like Jury. Girtz doesn’t have another job. Other than hanging out with his girlfriend Jennifer and his dog Vici, this is all he does and all he plans to do.

“I’ve got to stay focused,” said Girtz. “I’m one who has to be fully in what I’m doing. Right now, I’ve got to put all my focus in this game. It’s a tough game. It’s a rough sport. I always tell people that if you are not fully in it, it’s going to consume you.”

It’s been rough for Girtz, but he is ready to make big strides in 2020. This isn’t limited to his career, either.

“Honestly, in the last year, with that injury and everything, it was fight camp and then injury and then recovery and then fight camp again. My girlfriend and I looked back, and we’re like, we haven’t traveled and we haven’t been hiking as much lately,” Girtz said. “There hasn’t been much outside of training and recovery, which is not great. I try to live a balanced life. You’ve got to enjoy things. After this fight, that’s another one of our focuses. We’ve got some trips planned, and we’re trying to get back into that.”