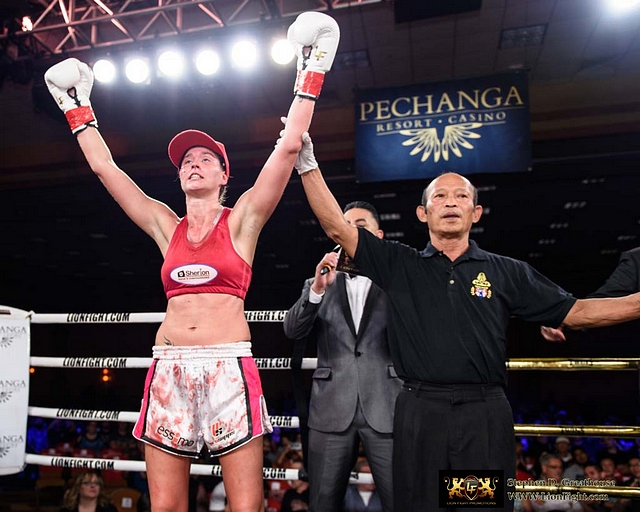 For most professional fighters, their craft is a full-time job. Even if they have a full-time day job, every other waking moment is spent training, and nighttime is a time to rest and recharge the batteries. To be a successful fighter, there has to be a rest period to stay at the top of the game. That is, unless the fighter is Jorina Baars.

Baars, who, at 40-0-3, is a very successful Dutch kickboxer, trains just as hard and just as long as anyone else in the sport. The difference is that she also has a full-time job working nights and weekends in security. Most fighters would not be able to work a job at all, especially during their rest period. Somehow, she has been able to do so while maintaining an undefeated record with multiple world titles.

The Dutchwoman has been training for 20 years, which is very impressive to hear coming from a 27-year-old fighter. She has trained with the same coaches for that entire time, and the last 10 years have been spent at the SportsArt Gym in Den Helder in North Holland. One has to ask, why has she been so successful?

“I think it’s because of my 20 years of experience,” Baars told Combat Press. “I’m an all-around fighter, and I can change my game during the fight.”

Baars is definitely a well-rounded fighter. Not only is she a champion in Dutch kickboxing, but she is also a Muay Thai champ under both Lion Fight in the United States and Caged Muay Thai in Australia. She picked up both titles in the last two years. The Lion Fight championship came after her infamous five-round dismantling of MMA standout Cristiane “Cyborg” Justino in 2014. Even though she had well over 30 professional bouts prior to the Cyborg fight, this was the one fight she feels really put her on the global map.

Lion Fight is, by far, one of the top Muay Thai promotions in the world, and for Baars to best Cyborg was a pretty sweet way to earn the promotion’s welterweight title. She has since defended the strap twice. She also picked up her second Muay Thai title shortly after.

“I had a fight in March in Australia at Caged Muay Thai with John Wayne Parr and became a Muay Thai champion at 70 kilograms,” Baars explained. “I won the fight by points after five rounds against Stephanie Glew. It was a very good fight and a very tough fight as well. My last three fights, I wasn’t focused at a full 100 percent on my fights, because I had a lot of work to do [and] I had a lot of things that happened in my family at that time.”

Baars’ next fight is scheduled for tonight at Lion Fight 31, which takes place at the Foxwoods Resort Casino in Mashantucket, Conn. She will be defending her title once again, this time against German-born fighter Angela Whitley. Whitley also happens to be undefeated and has racked up a couple titles of her own.

“I know she’s 31 and she’s from Puerto Rico,” said the Dutch fighter. “I saw a video on YouTube about her, and she’s an upcoming, very talented fighter. It will be a very tough fight.”

While Whitley will be bringing some fresh looks to the ring, Baars has had a bit of a change-up in her own training regimen. She still works in security and she also started her own business as a life coach, but all of that was put on hold for the first time in her career.

“I had 30 days off at work, so I could focus myself totally on training now,” Baars said. “I can train twice a day, get my rest, get my sleep, eat and everything is perfect at the moment.”

If an ultra-busy Baars can win world titles and go without a loss in over 40 fights, all while working crazy hours and getting little sleep, what is the world to expect tonight? The only way to find out is to tune in and see what this girl is all about.

Lion Fight 31 is arguably the promotion’s most stacked card ever, with four title fights headlining the event. Baars and Whitley will definitely be the highlight. Baars heads into the first of two title defenses to close out the year. After that, she will be back to training and work. She loves to help people feel confident about themselves through her life coaching, and her own confidence is easier for her to share through physical training and talking to people who have been bullied in the past. While she really loves to coach, fighting remains the main focus.

“I will be busy until my fight in December in Australia, defending my world title for Caged Muay Thai. After that, I don’t know. This is my last fight for Lion Fight on this contract, and I hope to get a new contract. I look at it fight by fight. I’m just focused on this fight and the fight in December. I hope to fight at least two or three more years. I will fight against the best in the world, so bring it on.”