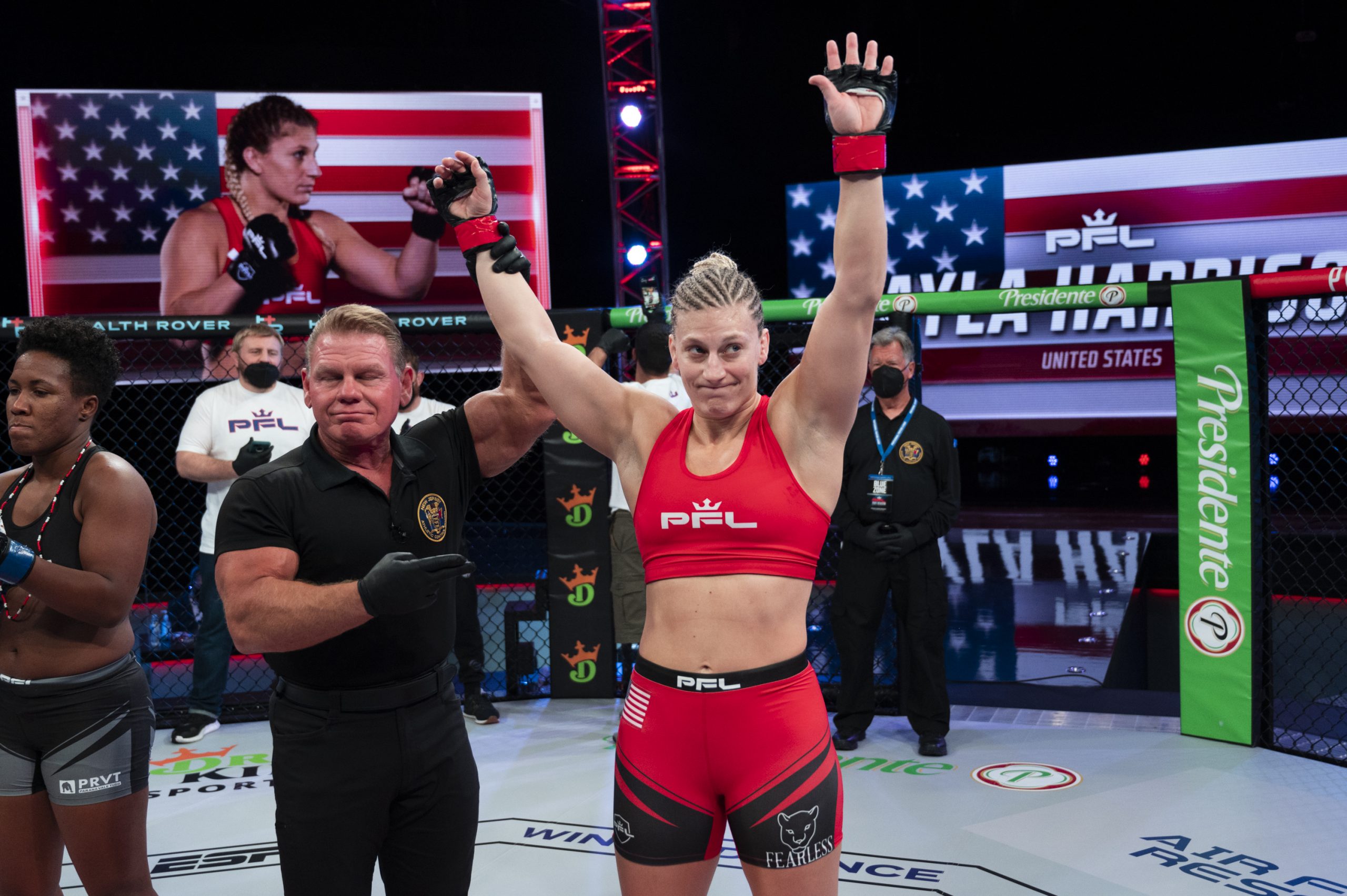 On Thursday, Aug. 19, the Professional Fighters League will host PFL 2021 8: Playoffs from the Hard Rock Hotel and Casino in Hollywood, Fla.

The event marks the continuation of the 2021 PFL playoffs. Fighters in the heavyweight and women’s lightweight divisions are the next in action. The night is headlined by two-time judo gold medalist and undefeated lightweight queen Kayla Harrison opposite Genah Fabian.

Although the focus will be on the main card and playoff semifinals, six other prelim fights join the fight card. Intriguing matchups to watch include Renan Ferreira vs. Stuart Austin, Muhammed DeReese vs. Carl Seumanutafa and Christian Lohsen vs. Jonas Flok.

Kayla Harrison has looked like an unstoppable force since the start of her MMA career; does Genah Fabian have what it takes to give the Olympic gold medalist her first loss?

In the women’s lightweight division, reigning champion Harrison looks to make the finals against Fabian. Harrison comes into this fight with a 2-0 regular-season record with both wins being first-round finishes. On the contrary, Fabian is also 2-0 with a second-round knockout in her last fight. The winner of this fight will be in the $1 million finals against either Larissa Pacheco or Taylor Guardado.

Since turning pro in 2018, Harrison has been seemingly unbeatable. Her ability to use her grappling to take her opponent down and smash her has been the key to success. Although anything can happen, Fabian is going to need a nearly perfect performance to win this fight. The one weakness Harrison may have is struggling in a scrappy, stand-up fight. If Fabian wants to come out victorious, she needs to keep this fight standing.

The game plan in MMA is never this simple, but Fabian should have an idea where she wants this fight to go. Holding a record of 4-1, Fabian has finished three of her four opponents with punches. Fabian will need to control the distance with her jabs and kicks while throwing off Harrison’s game plan by peppering her with punches. If Fabian can keep the fight standing, we may see Harrison struggle for the first time. That said, all 10 of Harrison’s opponents have tried to avoid the grappling and all 10 have failed.

This is the first season for both Bruno Cappelozza and Jamelle Jones in the PFL; which fighter advances to the heavyweight final?

After joining the PFL season late, Jones managed to make the playoffs with a first-round knockout. Although he does not have high expectations, Jones’s power gives him the ability to finish any opponent in front of him. However, Cappelozza has been the most impressive heavyweight this season. Holding a regular-season record of 2-0, Cappelozza finished both of his opponents in the first round. In a world where only one punch can finish the fight, blinking would not be recommended.

Now that Jones is on everyone’s radar, it will be harder to catch his opponent off guard. His main problem in this fight is that his style plays right into Cappelozza’s specialties. Jones may have the power to keep up, but the speed of Cappelozza will be hard to adjust to. Anything is possible in a heavyweight fight, but Cappelozza should be able to maintain the distance and explode with his power. Do not count out Jones, but Cappelozza has looked like the best fighter in this division all season.

Taylor Guardado enters the playoffs with only three official professional fights; does she have the experience to defeat Larissa Pacheco and advance to the women’s lightweight final?

Pacheco ended her regular season 2-0, with both fights ending by first-round stoppage. Her combination of power and aggression has created major success thus far. Guardado, meanwhile, may be the most underrated fighter in the division. Holding a record 0-1 coming into the season, Guardado was given little chance to make the finals. But she won both of her regular-season fights and found herself one win away from the finals. Both fighters have shown improvements this year, but only one can come out victorious.

Although Guardado may not have enough experience on paper, her fighting skills tell a different story. Coming into this season with an 0-1 pro record, Guardado has experience in Invicta FC and the amateur scene. Training out of Xtreme Couture, Guardado has fought Ronda Rousey, Raquel Pennington and Ashlee Evans-Smith on the amateur scene. Her 2-0 regular season was unexpected, but being underrated should no longer be her concern.

On the other hand, Pacheco has tons of experience going into this semifinal match-up. Holding a pro record of 15-4, Pacheco has learned plenty on her way to improving her overall fight game. Guardado has fought strikers before, but Pacheco’s aggressive and powerful striking is a nightmare for an inexperienced fighter. All things considered, Pacheco should be able to overwhelm Guardado with pressure and punch her ticket to the finals with a stoppage.

Denis Goltsov and Ante Delija. Although the focus should be on this semifinal match-up, this fight is simply not talked about enough.

After going 2-0 with two finishes, Goltsov looks to make the finals after losing in the semifinals of the 2019 season. At 31 years old, Goltsov has performed better than ever this season. On the other side of the cage, Delija went 1-1 in the regular season. After losing his first fight, Delija made a statement with his first-round knockout against Chandler Cole. The winner of this fight will fight Jamelle Jones or Bruno Cappelozza in the finals.

This match-up is the sleeper fight because both heavyweights have high fight IQ and the tools needed to get a finish. The name of the game here will be distance management. Although Delija won’t be hopeless on the ground, a striking battle should be his preference. On the contrary, Goltsov has made a career by taking his opponent down and smashing them. On paper, no fight is more intriguing than heavyweights that know how to maintain cardio and use their power efficiently.