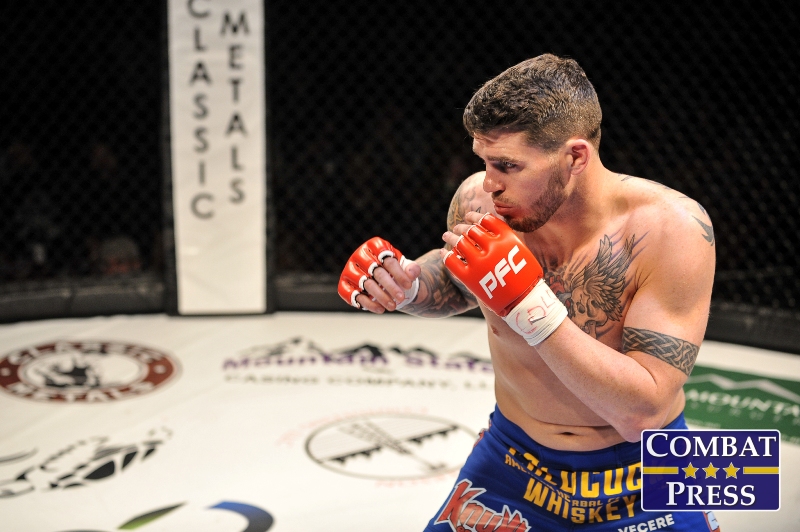 PFL’s Chris Camozzi: A Chance to Make the Playoffs

MMA, as far as professional sports go, is very fast-paced. Even though a layperson or casual fan might get bored watching a grappling exchange on the ground, the rounds still only last five minutes, compared to a baseball game that can see a few hours of little-to-no action. So, when the Professional Fighters League created a tournament format with points and a quick turnaround between fights, it added a new macro level of action to an already swift game..

Longtime UFC veteran Chris Camozzi went from fighting an average of three to four times per year for a decade to taking a couple years off from MMA to focus on his career in GLORY Kickboxing. After a return to MMA for a couple of fights in 2019, he was set to compete in the 2020 PFL tournament. Of course, those plans were derailed by the COVID-19 pandemic. When the 2021 PFL tournament kicked off in April, he was back in the saddle once again. Camozzi went the distance with Emiliano Sordi in a losing effort.

“It felt good to get back in there,” Camozzi told Combat Press. “I was disappointed in my performance, but, you know, this tournament is crazy.

“I had to tell myself [not to] dwell on [it]. I’ve got to move on to the next one. It was a good fight. There’s a lot of things I think I should’ve done different[ly]. When I went back and watched it, there were a few positions where I was like, ‘Man, what was I doing?’

“I think there was one point that I swept him — he was standing over me, and I swept him — and I got up and threw an uppercut, because he was on his hands and knees. And then I started hunting the knee, so I let him come up, thinking I was going to knee him in the head, and he just turned toward the cage. Going back, I should have just kept throwing hard punches from there, because I think it was possible I could have finished him there. I just try not to dwell on it.”

The first and second fights of the 2021 tournament are only 49 days apart for Camozzi. That second fight comes on Thursday night. He will try to earn some major points when he faces fellow UFC veteran Cezar “Mutante” Ferreira.

Ferreira won his first fight, which also took place on April 29, with a 37-second knockout of Nick Roehrick. This earned the Brazilian six points and put him at the top of the division, even ahead of Sordi, who only earned three points. This is a big battle for Camozzi. With a 12-day hotel quarantine before the event, he enlisted the help of a former foe.

“We’re all locked in hotel together, so you see everybody,” Camozzi explained. “I see my opponent Cezar. You see everybody anytime you walk downstairs. Last camp and this camp, I’ve been training with [João] Zeferino and those guys while I’m here. One day, I met up with them to do jiu-jitsu, and Sordi walked in. Zeferino asked if I minded if he trained with us, and I said I didn’t care.

“I’ll train with anybody. It’s not like we’re fighting again soon. Well, I can’t say that, because we could end up fighting next fight. We’re making do with what we have here. This lockdown is not ideal. Right now, it’s just important for me to get rounds in. So, anybody who’s willing to train, I’ve been jumping in with [them].”

It’s not the first time Camozzi has trained with a previous opponent. He fought current UFC light heavyweight Dustin Jacoby in 2012, after which time Jacoby made his way out to Denver and became a longtime training partner and friend to Camozzi. The following year, Camozzi took a split-decision win over Nick Ring, who spent some time training with him as well. Sordi is just the latest guy to turn from enemy into — temporarily, at least — an ally.

“I think there’s obviously value in it,” Camozzi said. “He’s a high-level guy, and he won the decision over me. So, why not get that experience in there? I’ll train and I’ll learn from anybody. I realize he and I are a really good match-up, I think, as far as training goes too. Even when we’re just training back-and-forth kickboxing — because we’ve trained together a couple times now — they’re really hard, fast-paced rounds. We both throw similar combos, and it’s actually a good pace. He’s a really good training partner.”

“My camp change for my first fight definitely worked,” Camozzi said. “I looked a bit better in certain spots. The places that I wasn’t happy with, it was my own decisions as far as me looking back on the last fight. I don’t think it had anything to do with the training that I did leading up to the fight. It was just some mental errors that I made. Everything has stayed the same. We are preparing for a southpaw this time, obviously, and there’s not a ton of time to change a lot of things, so we just kept going full steam ahead.”

The quick turnaround can be risky. Camozzi and Ferreira both came out of their first fights relatively unscathed, though. Camozzi is looking forward to the opportunity to finally fight a guy he had trained to fight when both men were in the UFC.

“He and I were also slated to fight a few times, and it didn’t work out,” explained Camozzi. “I’m fighting a little bit of a different guy this time. He seems to have miraculously put on a lot of size. I think, at one point, he was like 170 [pounds], and now he looks like he’s cutting to make 205. He’s just like a walking ball of muscle. It doesn’t really matter to me. I’ve fought guys at heavyweight. I’ve fought guys all over the place. I like this match-up, and I think my pressure is going to be a problem for him.“

Ferreira is a third-degree black belt in BJJ, but he only has four submission wins in his 22-fight pro career. He has four knockout victories, but also just as many knockout losses. Almost half of the Brazilian’s fights have gone the distance.

Camozzi has had nearly twice as many pro fights as Ferreira. He has 15 stoppage wins and only one knockout loss. He has been submitted six times, but two of those defeats came against two-time ADCC gold medalist and multiple-time IBJJF world champion Ronaldo “Jacare” Souza and the last one came to third-degree BJJ black belt Thales Leites, who has a whopping 15 career submission wins. Ferreira has proven to be more prone to striking, though, which works in Camozzi’s favor.

“He likes a lot more flashy and fancy stuff,” said Camozzi. “I stick to more of the basics and just come forward. I think I’ll be able to nullify a lot of the stuff that he likes. It’s also interesting with this tournament, because of the point system, right? He’s leading the division in points — I try not to think about it too much; I’m just going to go in there and fight — but part of me wonders if he’s going to try to stall it out a little bit.

“Anything other than a finish in the first round, and I can never tie him in points. It does throw a little spin on this thing. There’s a little bit of a way to game this system.”

The PFL’s format is certainly unique. It comes with some quirks. There are other factors at play as well.

The 2021 PFL tournament is an exciting event, but it can also be stressful for the fighters. Regardless, Camozzi is just happy to be back where he belongs. He looks forward to his next battle, which fans can see live on ESPN2.