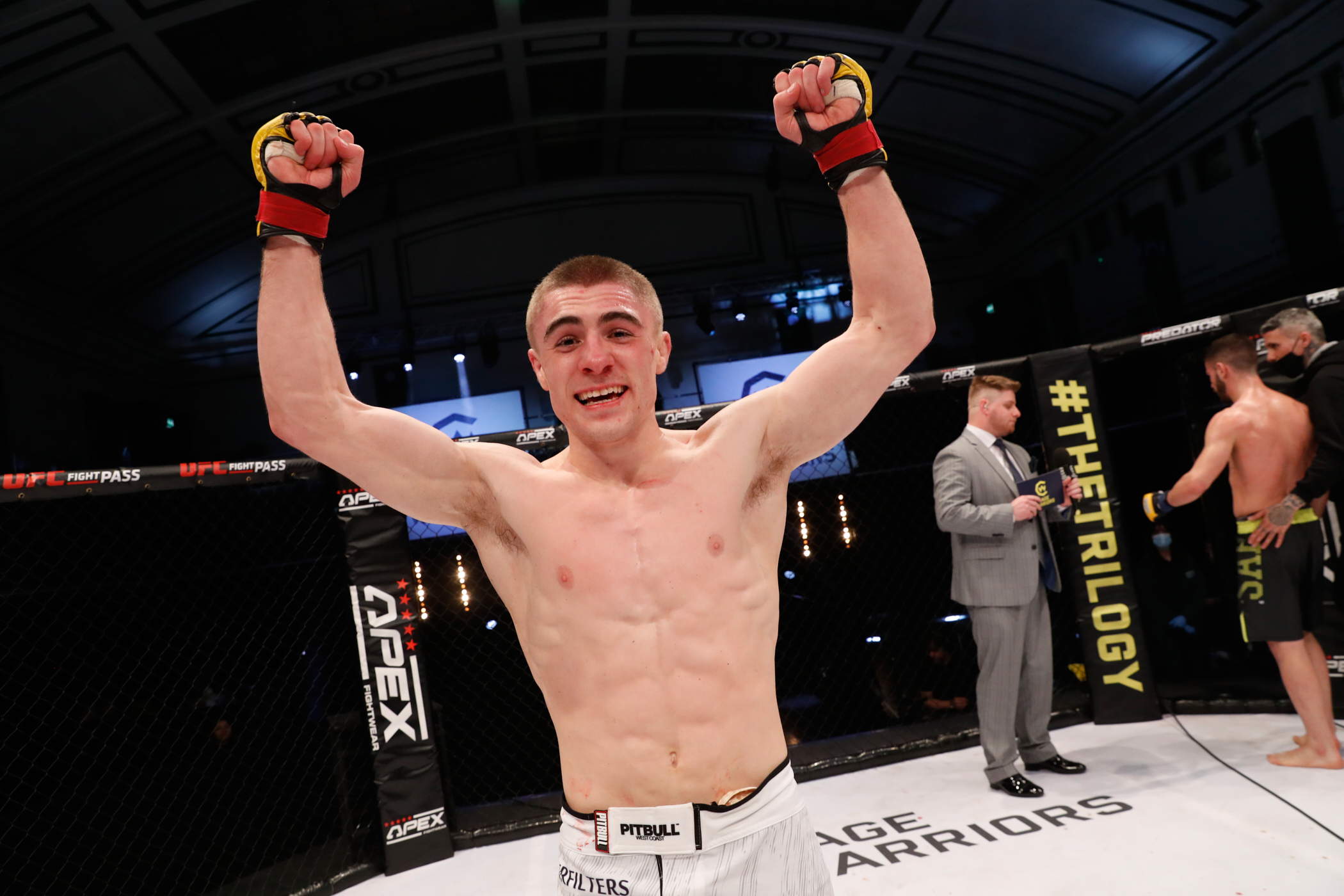 Last week, Cage Warriors announced that it has extended the contracts of some its hottest prospects, made new signings with some young blood, and inked a familiar returning face.

The familiar face in question is Paul Redmond, who had eight fights with the organization between 2012 and 2014. He scored finishes in six of those affairs, most notably against current Bellator fighters Lewis Long and Ryan Roddy. Since then, Redmond has fought in the UFC, BAMMA and, most recently, Bellator MMA. He’s a top European lightweight, and there’s no doubt he has his eyes on Agy Sardari’s belt. Redmond expressed recently that he wants to “hit the ground running.”

It should come as no surprise to see Paul Hughes and Nathan Fletcher get extensions to their contracts.

Undefeated in his six pro fights, the young Irishman Hughes was on track for the featherweight title before he was derailed by Jordan Vucenic in December in a hard-fought split decision loss. Hughes added a unanimous-decision victory over James Hendin in March’s trilogy event to get back in place for a title shot, which now seems likely to happen after Vucenic went on to win the belt from Morgan Charriere.

Vucenic wasted no time in expressing his desire for a rematch with Hughes to gain a more decisive victory and put his stamp on the division. Hughes looked formidable against Hendin, who up to that point had been dominating his opponents.

Fletcher has also been catching a lot of people’s attention in the bantamweight division recently. He fights out of Next Generation Liverpool and has been on a tear in the last couple years. Fletcher finished all five of his amateur fights. He faced his toughest test yet against Michele Martignoni, a fellow undefeated Italian fighter, at the last Cage Warriors trilogy event. Fletcher came through once again with the rear-naked choke to stop Martignoni in the third round despite Martignoni narrowly escaping the same position at the end of the first frame. The young Liverpool lad has got big things ahead for him.

Michele Aidan Stephen, who holds an 8-4 mark, and Luke Shanks, who sits at 7-2, were the others to receive extensions to their contracts.

There were also plenty of others to receive fresh contracts. Some of these fighters, including Adam Cullen and Omeil Brown, have already made their first appearance with Cage Warriors. Cullen and Brown gained first-round submission victories in their debuts over Oscar Ownsworth and Joshua Onwardi, respectively.

Baktyaar Oryakhail and Marcus Lewis are among those who will make their pro debuts with the organization.

Lewis has two belts to his name at the end of his amateur career. He claimed a strap with Cage Warriors after spending time on the academy circuit. He gained experience facing other high-level amateurs before going on to the Almighty Fighting Championship, where he won the amateur lightweight title. He’ll definitely be one to watch in the future.

Aaron Aby is also another notable signing. One of the top flyweights in the country, Aby holds a professional record of 11-3-1 and has tallied numerous finishes in an array of different organizations. We could soon be looking at Jake Hadleys first flyweight title challenger.

The announcement last week shows that Cage Warriors is keen on expanding its roster in a meaningful way. The company is adding experienced stars to jump in and compete at the highest level, while also bringing in some highly anticipated newcomers that are sure to rise quickly through the ranks.