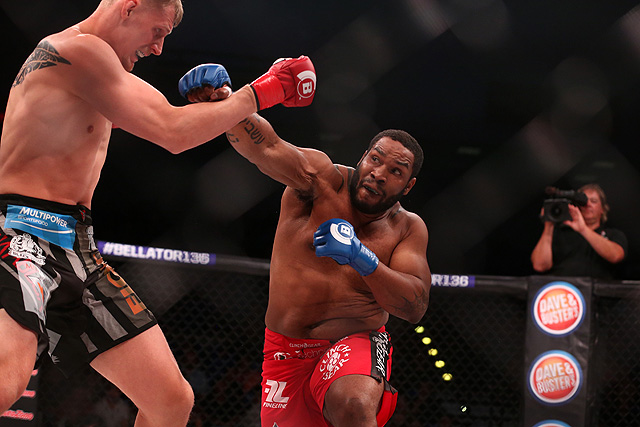 Like many fighters this year, Croatia’s Delija was affected by several circumstances that did not allow him to compete. He was actually signed by the UFC, but the company was forced to release him due to his contractual status with the PFL. The UFC should eventually resolve that impediment and get this guy on the roster.

Delija, a disciple of Mirko “Cro Cop” Filipovic, is still a top prospect despite being 20 fights into his career. He is a well-rounded guy who has solid kickboxing to accompany good wrestling and grappling. On the mat, he likes to throw ground-and-pound. He’s tall and long, which helps him fight from a distance and land before looking to set up his ground attack.

Obviously, the UFC already has its eye on Delija, who they had signed in 2020 to partake in one of the Fight Island cards. However, with his contract snafu putting him into a holding position, it’s a possibility that it will be tough to roster Delija. He clearly deserves a spot, though.

Johnson, at age 34, is the oldest fighter to be included on the list this year. The American is a heavyweight champion in Russia and has been competing as a pro since 2008. However, he has fought just 20 times in 12 years. That’s not exactly a busy schedule.

Johnson excelled as a wrestler at Iowa State once upon a time. Wrestling definitely remains a part of his game, but he’s also a good striker. He has big-time power that was on display in his only fight of 2020, a 69-second destruction of UFC veteran Daniel Omielanczuk. His previous victims include Denis Smoldarev, top-10 UFCer Alexander Volkov, former UFC champ Tim Sylvia, and current UFC contender Derrick Lewis.

With the U.S. government sanctioning the Chechen government leader, Johnson might not be able to fight for his current employer again. The UFC could swoop in and greatly benefit from adding him to its roster. He doesn’t have a ton of time to make a run at the title, but he’s good enough to be given a chance at it.

Usman is another heavyweight who makes this list for the second year running. He’s the brother of UFC welterweight champion Kamaru Usman. The monster of a man continues to win fights in a division where talent has become scarce.

Mohammed was a wrestler at the University of Arizona, and it shows in his fights. He’s very physically dominant, using excellent takedowns and pure strength to gain an upper hand on opponents. He has nasty ground-and-pound, though he has also shown the ability to submit guys, particularly with the kimura. He fought just once in 2020, beating Terrance Hodges, a fighter who held a 2-6 record at the time. While that particular victory might not inspire much confidence, Mohammed has won four straight bouts.

Usman was linked to be in the 2020 PFL season before its cancellation, so there’s a chance that he will be involved in the upcoming 2021 season. If that’s the case, then the UFC will have to wait another year before pursuing him. However, if the company has a chance to nab the 31-year-old wrestler sooner, it should do so.

The first of two Russians on this list to share the same last name, Alikhan conjures memories of a younger Alexander Volkov. Is he as talented as the former Bellator champ and current UFC contender? Only time will tell.

Alikhan is a 6-foot-6 fighter who tips the scales close to the heavyweight limit. Simply said, he’s a big guy. He has strong kickboxing ability and some underrated submission grappling, though the latter was seen more often earlier in his career. He’s a definite knockout artist. Alikhan fought just once in 2020, though he scored a huge win — possibly the biggest of his career — over respected veteran Denis Smoldarev, whom he stopped via first-round knockout. Alikhan’s last setback came in 2016 against current UFCer Volkan Oezdemir.

Alikhan is UFC ready. If the comparison to Volkov is even halfway accurate, then he will have quite the successful run with the company.

Russia tends to be the home right now to the majority of heavyweight prospects who hold potential. Among them is Mukhamed Vakhaev. He has thus far dominated the Russian regional circuit and beaten some of the best fellow prospects his homeland has to offer.

Among his recent wins is a guy who made this list last year: Evgeniy Goncharov. Mukhamed defeated Goncharov via submission in 2020. It was his only win of the year, though. In previous years, the menacing wrestler and submission fighter took out the likes of Sergey Belostenniy (twice), PFL veteran Denis Goltsov, and current UFC fighter Tanner Boser. Mukhamed has not lost since 2015 and has put together a nice winning streak to get to where he’s at right now.