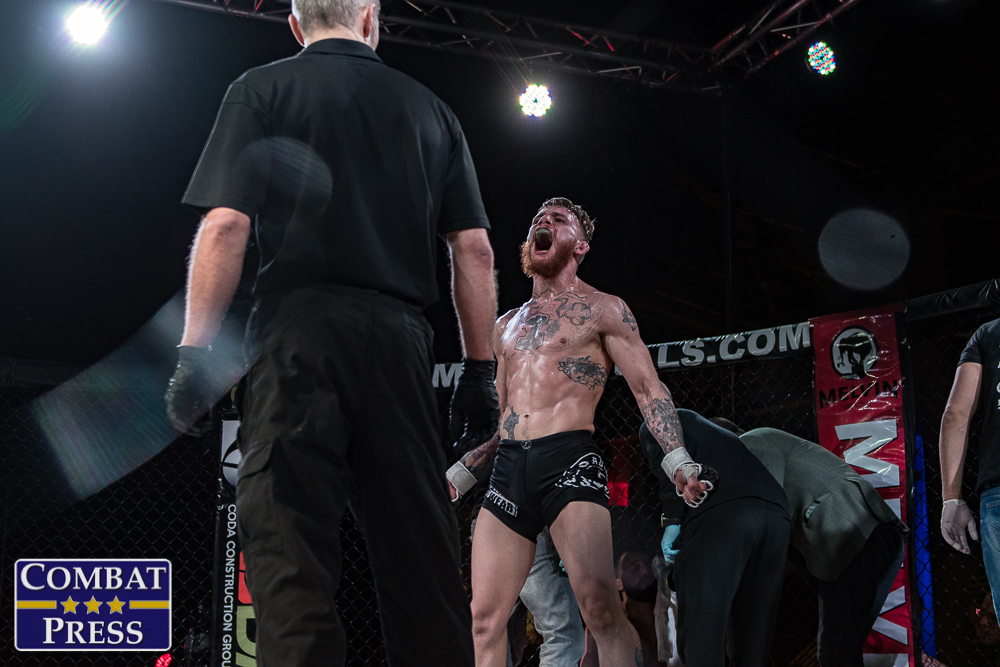 Sitting on the bench sucks. It especially sucks when you’re an undefeated fighter who is healthy and ready to go.

Jake Heffernan has never been in too big of a hurry to take his MMA career to the next level, because, as he mentioned in a previous interview with Combat Press, he doesn’t want to rush things. However, no fighter wants to sit around for several months searching for opponents.

In his last outing, which took place in June 2018, Houston’s Heffernan faced a very outspoken Peter Stanonik in the Legacy Fighting Alliance cage. He came into the featherweight co-headliner as a moderate favorite, and he didn’t disappoint. In fact, the Brazilian Jiu-Jitsu brown belt actually outstruck a striker.

“[Stanonik] is a [145-pound fighter] here in Texas, usually doing his hand more so in striking in boxing matches, but also he’s got a pretty good MMA record,” Heffernan told Combat Press. “But, that up-down — that ground-and-pound as well as the striking — was overwhelming for him. So, I stayed undefeated with the fight, and I just kind of showed the mixed martial arts in comparison to the straight kickboxing.”

The victory over Stanonik at LFA 43 took Heffernan’s professional winning streak to seven in a row. He may not be in a hurry to jump right back into camp after each fight, but he easily could have had two more bouts in the last nine months. However, opponents have been scarce.

“I’ve had a long layoff for no other reason than I could not get people to get fights against,” said Heffernan. “The one fight that I did get somebody to accept, the guy got injured. That was the only one I had ready to go, in December, which was going to be for LFA again, and my opponent, unfortunately, got injured. I’ve literally not been able to get matched up, but I’ve been ready to go ever since.

“I know that 7-0 can be a scary number for some guys to look at, and I know people don’t want to be the last fight I get before I make it to the big show. I also know there are guys that want to nitpick their opponents, and be like, ‘Who can I fight that will pad my record?’ I understand that mentality, but my mentality is that if you’re not going to fight the hardest dudes in your city or your area, then you have no reason to fight the dudes in the UFC.”

Heffernan practices what he preaches. When he gets to the UFC, he wants to be ready to compete at the highest level. He’s seen too many people get called up too quickly, and they wash right out. Fortunately, though, he finally got a call to fight at LFA 63, which goes down on Friday night in Dallas. Heffernan faces fellow undefeated prospect Gabriel Silva at the Bomb Factory for the co-main event of the show.

“I know he’s 6-0,” Heffernan said. “He’s from Brazil, and Legacy seems to think he’s a big deal, but I’m not sure he is. He’s [UFC veteran] Erick Silva’s little brother. Style-wise, I know he matches up with me great. Being from Brazil, I’m sure he’s real savvy on the ground. I’m not sure if he’s a black belt or not. I know that’s what a lot of guys usually assume when you’re fighting somebody from Brazil.

“I’ve seen a few of his highlights and a few of his fights. He’s a typical kind of brawler-grappler, I think. My coaches are watching tapes a little more steadily, so we can get a feel for his style. I do think it’s weird he’s known for being Erick Silva’s brother, and not just known for himself. Hopefully, that’s not too big of a shadow over him.”

Heffernan still trains at his home gym, Gracie Barra The Woodlands, with UFC welterweight Alex Morono, who owns the gym. However, for most of this camp, Morono was cross-training at Fortis MMA in Dallas for his March 9 UFC fight — Morono won that fight handily in the first round — so Heffernan needed to stick close to Houston to help manage the gym. He has spent a lot of time cross-training with some longtime MMA veterans.

“I’ve been training a lot lately with Daniel Pineda at 4oz Fight Club as well,” Heffernan said. “In my time off since my last fight, I’ve actually visited Fortis, and also got some training in there. I’m actually dying to go back. I’ve been getting insanely good training in with Daniel Pineda and WEC vet Todd Moore. I’ve been training pretty steadily with both of those guys. Honestly, Daniel Pineda is the most underrated guy not in the UFC. That dude is the best [featherweight] I’ve ever trained with, and he really gives me a feel for how good I need to be to get onto that next level.”

When he’s not hanging out with his wife Nakita and two-year-old son Ronin, Heffernan is training. There is a reason he’s undefeated. If someone wants to be at the highest level, they need to be able to fight at the highest level. On Friday night, Heffernan will have a chance to take down someone’s undefeated record. From there, he will patiently keep climbing the ladder until he gets to the top.