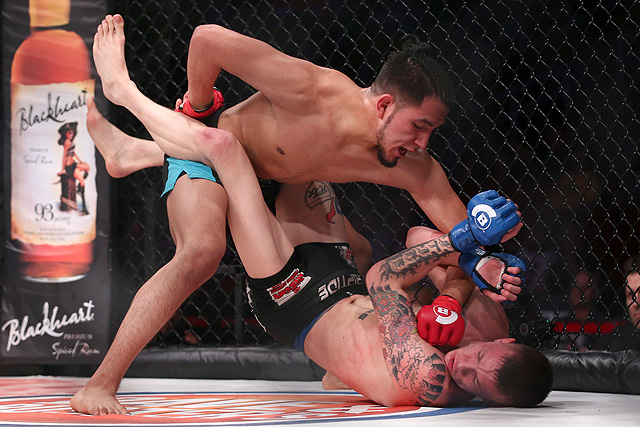 The bantamweight division is arguably the most loaded weight class right now. Currently, there are a plethora of prospects beginning to emerge. This weekend’s UFC Fight Night: Brunson vs. Holland card includes a match-up between two of these rising contenders: Adrian Yanez and Gustavo Lopez. With impressive regional and early UFC careers, a win for either here will catapult them up the ranks.

Yanez compiled a 10-3 record before his Dana White’s Contender Series call-up. He has claimed wins in Bellator MMA, the Legacy Fighting Alliance, and Fury FC. His appearance on the Contender Series came in October, when he scored a 39-second knockout of Brady Huang. Yanez dropped Huang with a one-two. As Huang stumbled back to his feet, Yanez swarmed him with crisp boxing. The referee stepped in, and Yanez was subsequently awarded a UFC contract.

Yanez’s Octagon debut came two months later in a clash with Victor Rodriguez. Yanez had success with the hands early, before finishing Rodriguez via head kick three minutes into the opening round. Yanez garnered a performance bonus for the win and alerted spectators as to his potential. The Arizona native has fluid striking, particularly in his boxing, but also looks to employ his deadly kicks and knees.

Lopez came into the UFC with an 11-4 record and the Combate Americas bantamweight strap. He made his debut on two days’ notice against Georgian sensation Merab Dvalishvili. Lopez showed incredible heart and resilience while going the distance against the relentless wrestler. However, he was ultimately on the losing end of the decision.

Lopez rebounded to score his first promotional win in November. At UFC Fight Night: Santos vs. Teixeira, he secured a first-round submission over Anthony Birchak. The Mexican repeatedly landed his right hand. He eventually dropped Birchak with the punch. After Birchak scrambled to his feet, Lopez secured a takedown. Birchak gave up his back and allowed Lopez to attempt the rear-naked choke. With no escape, Birchak was forced to tap. Lopez gained not only his first UFC win, but his first finish with the company.

Yanez will be viewed as the faster and more precise striker, whilst Lopez has the edge in grappling and takedowns. We’ve seen little from Yanez on the ground, and Lopez may look to exploit any potential weaknesses there. Moreover, Lopez trains out of super camp Xtreme Couture in Las Vegas. With high-quality coaching and training partners, Lopez might have an added edge. However, Yanez’s power and finishing ability will prove difficult to overcome for Lopez.

With a combined 20 finishes and 83 percent stoppage rate, these two men combine for a fight that has action written all over it. They each gained their first UFC win their last time out, and they are now beginning to acclimatize to the Octagon. The winner is sure to take another progressive step up the bantamweight ladder. With their contrasting styles and finishing abilities, this duo are set for a battle that is one to watch.