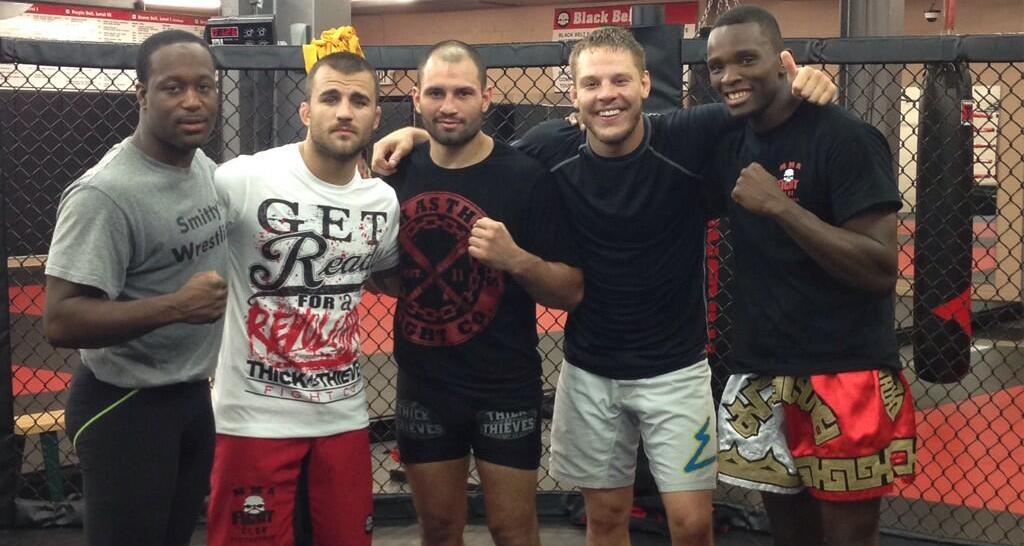 Pinnacle FC’s Mark Cherico: Cooking Up Something Special for Thanksgiving

When the aroma of a roasting bird begins to fill the house, it’s almost like heaven. Walking through the front door, you feel your mouth begin to water instantly as the scent hits you across the face, just like a perfectly timed punch. All the trimmings are prepared and ready to be feasted upon.

If Mark Cherico walked into that house right now, he’d probably lose his mind. Watching that meat being carved right before his eyes would be dangerous. It’s not that long to go now, though. Fight night is almost upon him. But even still, every waking moment, that bird haunts him. After fists are thrown on Nov. 26, however, that all changes.

“I’m going to go home, eat some turkey and stuff my face for about a week,” Cherico told Combat Press. “I’ve got a lot of food that I want to eat. Cutting down to 135 [pounds] hasn’t been the most fun thing in the world. But, most importantly, hopefully sometime in the New Year I’ll get that call from the UFC and have a contract to sign.”

Cherico currently sports an unblemished record with seven wins from seven fights. On Nov. 26, he returns to action once more. He’ll fight on Pinnacle FC’s Pittsburgh Challenge Series 9 card against Brian Kelleher, a veteran of 17 fights. A victory one day before Thanksgiving could very well prompt the phone call he hopes to receive.

“Yeah, I think I’m going to make a splash,” Cherico predicted. “2015 is going to be my year. It’s going to be a very big year. I hope everybody is as excited as I am for me to do my thing on the biggest stage in the sport.”

Transitioning to the UFC from the regional circuit is the obvious goal of any professional fighter. With an almost endless pool of fighters seeking the very same thing, Cherico has a lot of competition in his quest to join the big leagues. A big part of getting that shot is being healthy and continuing to win. With two wins already in 2014, Cherico has been able to achieve both.

“Yeah, if I win this fight—and I feel like I’m going to, I feel like this is my time—I feel I’ll be in the UFC,” Cherico exclaimed. “It’s pretty awesome, but I’ve got to keep it in perspective. I’ve got a job to do Nov. 26. But I’m going to get the job done and I’m going to achieve my dream, which is to get into the UFC. Once I get there, we’ll start a new dream. That dream is to become a world champion.”

That wasn’t always the dream, though. Before Cherico had even donned a pair of gloves, he was headed down a different path. He was still going to be using his hands, but they were going to be used a little bit more delicately.

“It was a grind, getting up really early in the morning to work at Giant Eagle,” Cherico explained. “I would take inventory, do all the shipping and receiving and that kind of stuff. Then I would basically be in a refrigerator for eight hours, working with chicken, salad—whatever it was that day. It was a tough job, but it was a good experience. It taught me how to get up early and really get at it. Before that, I was used to night shifts, getting up at one or two o’clock in the afternoon to go to work at four. I had to get up very early in the morning to go to work.

“I was there because, if you work long enough, they’d pay you to go to school, and I wanted to go to culinary arts school. Just by chance I ran into my neighbor, who had an MMA shirt on. I asked him if he did MMA. He said, ‘Yeah,’ and we got to talking a little bit. He said, ‘I’m free right now, if you want to do some pad work. I can show you some stuff.’ We went to the garage, did pads for a bit. That continued for a week or two and I really enjoyed it. At the same time that I began to train MMA more and more—and really liked it—the time was coming for me to go to school. I decided that I really wanted to take a shot at MMA. I knew that if fighting didn’t work out, I could always go to school. But a year later, I was winning fights, so I quit cooking altogether and focused on my fighting.”

Cherico’s upcoming opponent, Kelleher, has competed in over double the amount of fights that Cherico has fought in. That extra fight experience can sometimes prove to be a big difference when it comes to fight night. Cherico, who just started competing professionally in 2012, has grown comfortable with going up against more experienced adversaries.

“I don’t think it’s anything new,” Cherico admitted. “Except for one of my pro fights, I think, all of my opponents have had more experience than me. I’ve been in there 17 times [combined amateur and pro]. He may have a few more pro fights than me, but I know what to expect. I know how to go through the motions leading up the fight and what happens during the fight. There’s nothing that’s going to throw me off. This is a great fight for me.”

Perhaps the only thing greater will be celebrating Thanksgiving with another win on his record and the UFC potentially lighting up his phone. Well, that and the turkey he’ll finally get to enjoy.