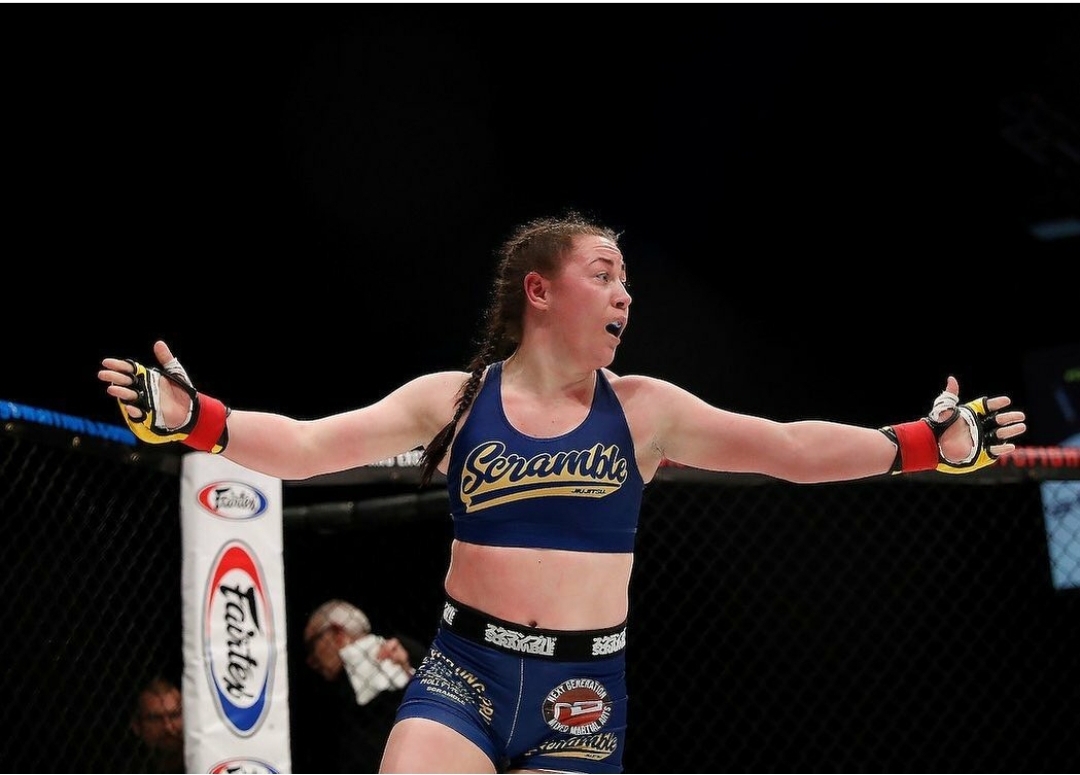 This weekend’s UFC Fight Night: Overeem vs. Volkov card includes two female bouts. Actually, there were three scheduled, but it was announced that Marion Reneau’s clash with Macy Chiasson would be moved back a few weeks due to a positive COVID-19 test for Reneau.

We do still have Karol Rosa’s fight with Joselyne Edwards, who is making a quick turnaround. There’s also the showdown between Molly McCann and Lara Procópio. So, let’s take a look at those fights.

I’m excited about this bout. Both fighters have one direct way to win what will be a fun striking match.

Rosa comes in on a four-fight winning streak. Her most recent victory came in a decision over Vanessa Melo in July. She is going to want to be more technical in this contest. She has a very good jab that she often follows up with a nice hard cross. She fought a really tough schedule even before the UFC, so she’s one of those “seen-it-all” fighters. This is good in the sense that she is ready for anything and isn’t going to panic. Rosa will likely have a way to deal with whatever comes at her.

Edwards will come at Rosa with aggression and won’t be afraid to mix it up. Edwards will pressure Rosa for 15 minutes. So what does Rosa want to do? Well, she’ll want to fight as she did against Lara Procópio. Her jab will be her best weapon to try to keep Edwards at bay. She can follow up that jab with her cross. Obviously, though, she shouldn’t rely on just two punches. This is where her leg kicks factor in.

Rosa doesn’t have to fear Edwards coming in close, because she might even excel if that happens. However, why let Edwards get somewhere where she is comfortable? Edwards has never really been pushed or put in an uncomfortable position. She has two losses, but one of those setbacks came in her second fight and she also wasn’t really made to feel uncomfortable in her more recent loss to Sarah Alpar. Rosa should be the aggressor instead of letting Edwards take on that role. Of course, Rosa needs to be smart with her aggression. Once those combos start landing, she can feint more and make Edwards start second-guessing everything. This can make Edwards more reckless and prone to make a mistake. Rosa can then jump on that chance.

Edwards comes in on a very quick turnaround after having just won her UFC debut a couple weeks ago. While Rosa simply needs to be more technical, Edwards will want to turn this outing into a brawl. How? Use movement! If she can use good footwork, move around, and make Rosa have to figure out where to throw her punches, then it makes it harder for Rosa to get off that 1-2 combo so easily. Edwards can then come in at an angle and make it more of an ugly fight. Just as Rosa can frustrate Edwards, Edwards can frustrate Rosa.

Part of why Rosa had so much success against Procópio was because Procópio kept her head centered and gave the Brazilian a nice target. If Edwards moves a bit, then she might eliminate what could be Rosa’s biggest weapon. Edwards also needs to use her jab. She will have a reach advantage, so her jab should get there before Rosa can land one of her own. Finally, Edwards should target the body. This isn’t because of any specific weakness for Rosa, but rather that early shots to the body could lead to later openings for flurries to the head.

The first round of this affair will tell us a lot. The woman who has the better first round and gets out to an early lead can dictate the pace going forward.

McCann has become one of my favorite fighters to watch, even though she is the exact opposite of me as a fighter. She comes into this bout after dropping a decision against Taila Santos.

On the feet, this fight is all McCann. She is an aggressive fighter who likes to throw hard and seems to enjoy it when it’s done to her. She is fighting someone who is perfectly suited for her. Procópio, while she will move a bit, keeps her head centered and her hands low. McCann should be able to land, whether she chooses to be more technical and selective or opts to get in close and make it more about throwing flurries. If Procópio doesn’t get the clinch or takedown, she will throw back at McCann, but the Brit will be fine with this. The more Procópio throws, the less she is trying to get McCann down to the mat. McCann wants nothing to do with the ground game of her opponent.

What I would like is for McCann to keep the kicks to a minimum. If Procópio is getting tagged and can’t get the takedowns, then she will try to catch those kicks and convert them into takedowns instead.

Now let’s talk about the worst-case scenario for McCann: What if Procópio gets the clinch?

McCann will want to try to push it to the cage and avoid being pushed there herself. If she can do this and stay on the outside, then she should be safe enough. She can land some short shots or work to break off. If McCann gets taken down, then she shouldn’t try to do too much. Don’t do anything that will keep you there longer. If McCann is close to the cage, then she can try to scoot the rest of the way, get her back to the cage, and work to stand. If this isn’t an option, then she can attempt to stall it out and make the ref stand them up. The more McCann can land early on Procópio, though, the more desperate she will make her opponent. In turn, this means shots will be more telegraphed and easier to defend.

Procópio enters this fight after suffering her first pro loss against the aforementioned Rosa in August 2019. That time off could have given the Brazilian time to fix some holes in her game, work on some things, and round out her skill set. However, all we have to go on is what we’ve seen thus far.

Procópio has a sizable reach advantage that she needs to use to keep McCann at bay. In addition, she knows McCann isn’t looking for takedowns, so she can feel free to throw kicks and beat up McCann’s legs. If she does this early in the fight, then it will help open up takedown opportunities.

Procópio can also use her reach to punch her way into the clinch. If she jabs her way in close, then it’s going to get to the target before McCann’s punches do. When you are hit in the face, your attention is diverted for a second. Procópio can seize the moment and get the clinch. From there, she should be able to get it to the ground.

On the canvas, Procópio should assume McCann will want to stall. She can get a position that makes that harder. If she’s in guard, then work to move to half guard. From half guard, she can work to move to side control or even mount. If McCann is trying to stall, then her focus will be to hold Procópio close. This opens the door to be a little sneaky down below, slide a leg over, and continue to work to a better position. If passing doesn’t happen, then Procópio has to create some space and posture up to rain down some strikes. This approach might even lead to something like an armbar.