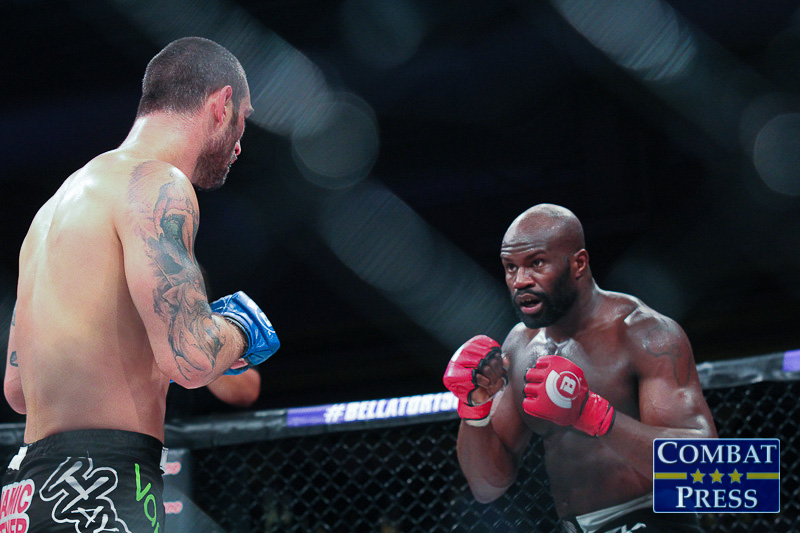 Given a short leash the last time he entered the cage when he fought Ryan Bader for the Bellator heavyweight title in September 2019, Cheick Kongo can’t really be blamed if he wants to have a longer fight against Tim Johnson on Saturday when the two big men headline Bellator Euro Series 10.

The fight with Bader lasted no longer than four minutes before it was ruled a no-contest when Kongo was unable to continue due to an accidental eye poke from Bader. Quite frankly, that’s the only thing that has been able to slow down the 45-year-old heavyweight fighter in the last five years as he has marched through eight consecutive opponents.

Nineteen years removed from his first pro fight in 2001 for Japan’s RINGS organization, Kongo still looks as sharp as ever. He’s had 12 fights go the fully allotted time in the last decade, with seven of them coming in the last five years. This speaks volumes on his durability and continued hard work to maintain his incredible shape. It’s what has allowed him to rack up Bellator wins against Augusto Sakai and Alexander Volkov, who are now ranked No. 10 and 6 respectively in the UFC.

In the next three fights following his initial rendezvous with Kongo in 2018, Johnson has improved his all-around skills, which has led him to win two fights in a row in convincing fashion against Matt Mitrione and the formerly undefeated wrestler Tyrell Fortune. Aside from Kongo, Vitaly Minakov was the toughest opponent Johnson has ever fought. Before Minakov scored a technical knockout via punches, Johnson was subject to a suplex in the first round, which was a sight to behold when taking his 260-pound frame into account.

A featherweight clash between Saul Rogers, a former contestant on season 23 of The Ultimate Fighter, and Austria’s homegrown Arbi Mezhidov rounds out the brief main card.

With the combined Euro Series 10 and Bellator 248 show, Bellator MMA will become the first promoter to hold an event in France since the sport was officially legalized in the country in January. The Accor Arena in Paris, France, serves as host for Euro Series 10, with the prelims kicking off at 2 p.m. ET on Bellator MMA’s YouTube channel, followed at 5 p.m. ET by the two-fight main card.

Two years ago, Cheick Kongo disposed of Tim Johnson in just 68 seconds. Can he repeat this feat in the evening’s main event?

Kongo has tobe considered the favorite in this sequel, but the results will not be the same if Johnson chooses to be more calculated with the risks he takes. The ability to end a fight with one punch is one of those far-and-few-between attributes in the sport of MMA, and Johnson is one of those people that likes to scrap like Roy Nelson, who happens to be one of his training partners. The biggest difference here is that Johnson, unlike Nelson, doesn’t have the ability to absorb knuckle sandwiches in the same grandiose way. This is fine, but it also means he cannot afford to stand and trade with a dangerous striker like Kongo.

Therefore, Johnson shouldn’t approach this upcoming fight the same way he did in 2018 or else there is a good possibility he gets knocked out for the second time. The 35-year-old Johnson should take away Kongo’s strong stand-up weapons and elusiveness by grappling and dragging the fight to the canvas as soon as possible. This is exactly what he did to Matt Mitrione in August at Bellator 243. Johnson overrode Mitrione’s athleticism by taking side control, where he utilized a ground-and-pound tactic that had a mixture of knees to the body and short hooks to the head. That fight was stopped by referee Mike Beltran midway through the first round.

Of the 30 victories that Kongo has compiled throughout his career, there have only been three instances where he won via submission. This last happened six years ago against Lavar Johnson at Bellator 123 by virtue of rear-naked choke. If Johnson can get the fight to the ground, then he’ll find the fast track to the winner’s circle.

Outside of the headliner, Melvin Manhoef is clearly the biggest name on this card. The veteran striker is up at light heavyweight for a fight against Italian Simon Biyong, who will tower over Manhoef by 10 inches. What’s the likelihood that Manhoef wins this fight?

Only in fighting and video games will you see a height disparity of these proportions. It’s pretty impressive how Biyong, who is a taller light heavyweight than Jon Jones, has only been stopped once in eight fights. In his most recent bout against Vitaly Shemetov at Rizin 20, Biyong was his dominant self and picked up his sixth knockout win. His 74-inch reach allows the 29-year-old Cameroonian to bypass his opponent’s guard.

Manhoef, who stands just 5-foot-8, has always been the shorter man against his opponents, but the size difference has never fazed him. He has looked past the disparity to post a 91 percent knockout rate among his 32 wins. On Saturday, Manhoef, who has traveled the world while fighting in a number of notable organizations throughout the years, will take part in his 50th bout as a professional mixed martial artist.

After making a living operating as a middleweight, Manhoef made the switch to light heavyweight by packing on an extra 20 pounds in 2019. He has two wins in the weight class against Kent Kaupinnen and Yannick Bahati. Despite moving up in weight, Manhoef has looked just as good and has retained his heavy hands. He picked apart Bahati with his lethal ground-and-pound to get a stoppage win in what he thought would serve as his last time in the Bellator cage during the post-fight interview with Josh Thomson.

One thing Manhoef did against Kaupinnen at Bellator 223 that he does not want to repeat against Biyong was to be the one reacting instead of acting. Against a man who will not let you rest with his pressing and relentless offense, the last thing that you want to do is be indecisive.

You can never go wrong with a Terry Brazier fight.

Brazier is one win under the .500 mark through three fights with Bellator, but what makes the 33-year-old interesting is that he is always in a jiu-jitsu and grappling chess match. He is one of the most underrated and entertaining fighters on the entire Bellator roster.

Brazier was superior against Alessandro Botti. He was always the man in the dominant and favorable positions for scoring until he put away the Italian with an Americana in the third round. When fighting in opposition to Soren Bak at Bellator London in late 2019, he ultimately lost on the judges’ scorecards via unanimous decision. However, his never-give-up attitude shined bright. It’s no wonder why he was the lightweight and welterweight champion for BAMMA in 2017 and 2018.

Yves Landu will be the one to fight Brazier on Saturday. Landu fine-tuned his craft under French promotion 100% Fight, where he fought eight times out of his 23 professional bouts. His second-round knockout loss to Hiroto Uesako at Rizin 18 snapped a four-fight winning streak that he had developed over a two-year span.