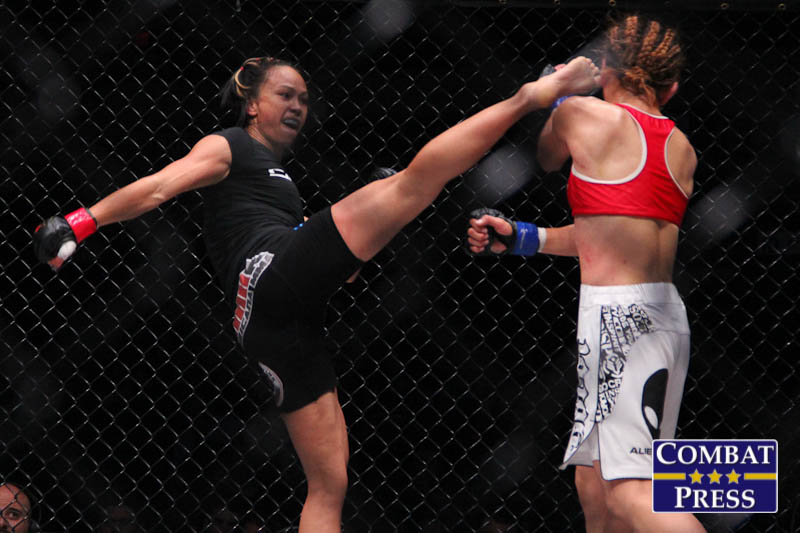 The UFC marches on after another successful — albeit short — event last weekend in which fans witnessed the ongoing resurgences of Alistair Overeem and Ovince St. Preux come into full effect. This weekend’s UFC on ESPN+ 35 lineup was supposed to be headlined by Thiago Santos and Glover Teixeira, but their bout was rescheduled after Teixeira tested positive for the coronavirus (COVID-19). Instead, the September 12 bill features two dangerous straightweight ladies when Michelle Waterson and Angela Hill lock horns.

These two women seem to have built up quite a rivalry in the last few months after some ongoing trash talk over social media. The winner will no doubt earn a big fight and move one step closer to a possible title shot in the ever-competitive women’s strawweight division.

The card also features a number of UFC standouts, including Matt Frevola, Bobby Green, Sijara Eubanks, Bryan Barberena and Ed Herman, all of whom will look to make statements on a card loaded with fan-friendly fights.

UFC on ESPN+ 35 takes place on Saturday, September 25, at the UFC Apex. The action starts with the preliminary card at 5 p.m. ET on ESPN+, followed by the main card at 8 p.m. ET. Combat Press writers Matt Petela and Andrew Sumian preview the event in this edition of Toe-to-Toe.

This card has taken some hits due to positive COVID-19 tests. The new headliner features strawweight ladies Michelle Waterson and Angela Hill. Who scores a rebound victory here?

Petela: This main event should be a fun fight. Both women have very crisp and technical striking, and they are almost as good at not getting hit as they are at hitting their opponent. In the end, there can only be one fighter who gets their hand raised. In this case, it will be Hill.

Hill had won three straight contests heading into her fight with Claudia Gadelha and had found a nice groove while fighting as frequently as the UFC would allow. Even in the fight with Gadelha, she put on a strong performance. Many people thought she deserved the nod. The massive amount of momentum she had built on the heels of that three-fight winning streak will only slow down a bit due to the split-decision loss to Gadelha.

This fight will end up being Waterson’s third straight setback. She was outclassed in a five-round battle with former champion Joanna Jędrzejczyk and then fell short in a much closer contest against the inaugural champ Carla Esparza. Waterson has accomplished a great deal in the sport and, at age 34, still has a long way to go before hanging up the gloves, but it is clear that she will never be able to make up for the size disadvantage she has in nearly every strawweight fight. She’s arguably one of the best atomweights to ever compete, but her title hopes outside of that division inside the UFC are virtually nonexistent.

This fight will be a major statement for Hill. It will be one of the biggest wins of her career and come against a name widely recognized amongst even the most casual of MMA fans. The win here will set her up for a fight against a top-10 opponent, and if she is able to continue racking up wins, then she won’t be too far from a title shot. The 35-year-old has hit a stride late in her career that could have the Maryland native wrapping a gold belt around her waist before all is said and done.

As entertaining and likable as Waterson is, she is just unfortunately not as talented of a fighter as the UFC has made her out to be. She has failed to defeat any of the top-ranked ladies in her division. Instead, she has convincingly lost against the division’s best time after time.

Hill is as tough as they come. She is easily one of the most effective forward-pressure fighters in the division. Waterson does not do well against pressure and generally needs distance to establish her striking and control. Expect Hill to aggressively stalk Waterson with volume and pressure en route to a unanimous-decision win.

Hill won’t ever be champion, especially with all the talent looming in the division, but she is certainly a fan-favorite and one of the more entertaining and game fighters in the UFC.

Andrea Lee has had a rough stretch in the UFC, with two straight losses. How will she fare against fellow flyweight Roxanne Modafferi?

Sumian: Lee’s two setbacks have been razor-close split decisions against Lauren Murphy and Joanne Calderwood. She started her UFC career 3-0, but has hit somewhat of a rough stretch. However, she has certainly proved her ability to compete with the top tier of the division and will now look to bounce back against the No. 7-ranked flyweight Roxanne Modafferi.

This isn’t exactly an easy rebound fight for Lee. Modafferi possesses some of the most effective grappling and ground control in the division. Modafferi likes to use her aggressive striking and forward movement to fluster her opponents before securing the takedown and going to town with vicious ground-and-pound, including some very painful elbows.

Lee will no doubt look to keep this fight on the feet, where she will hold a distinct striking advantage. She will have to use her jab and leg kicks to keep Modafferi at bay as she establishes her striking early in the fight. This will be a very competitive fight, but Modafferi will emerge with her hand raised after effectively using her constant pressure and clinch work to secure a close, yet convincing unanimous decision.

Petela: This fight comes down to a matter of who is able to successfully implement their game plan. If Lee keeps the fight on the feet, then she will walk away victorious. If Modafferi can bring the action into the grappling realm, then she’ll add another win to her already lengthy and impressive record.

Lee will be able to use her reach through an effective jab and teep to the body to stifle the oncoming Modafferi. The first round will be less than action-packed, with Lee being cautious not to overcommit to any aggressive striking that could leave an opening for Modafferi to capitalize upon. As the fight gets into the second and third frames, “KGB” will loosen up and begin to take a few calculated risks that do substantial damage to the “Happy Warrior” and give fans at home something to ooh and ahh about. It will likely go the distance, but Lee will put on a dominant performance and show that despite coming out on the wrong end of her last two fights she is very much a force to be reckoned with in the women’s flyweight division.

Petela: Brok Weaver. Things haven’t gone according to plan since his win on Dana White’s Contender Series. He was losing his fight against Rodrigo Vargas until he was on the wrong end of a brutal illegal knee that allowed him to pick up a win via disqualification. His sophomore outing was maybe even worse. Weaver was thoroughly outclassed by Roosevelt Roberts until succumbing to a rear-naked choke in the second round. Should he falter against Frank Camacho, Weaver will likely see a pink slip.

Sumian: Justine Kish. Hear me out. Yes, she is coming off a unanimous-decision win against Lucie Pudilová, but she had previously been on a two-fight skid that put her at a 3-2 record in the UFC. Unfortunately, her fights have been nowhere near eventful since her arrival in the organization, and she seems destined to go to decision after decision. Kish might not be on the chopping block just yet, but a loss on Saturday can put her in a position where the UFC just doesn’t see a reason to give her a new contract. The fight game is tough.

Sumian: Matt Schnell and Tyson Nam are going to steal the show on Saturday. These are two of the most electric flyweights out there. Nam will look to build off his last bout, in which he pulled off an incredible first-round knockout of Zarrukh Adashev. Meanwhile, Schnell is looking to bounce back after suffering a first-round knockout courtesy of Alexandre Pantoja. This fight will be fast paced and exciting till the end.

Petela: Roosevelt Roberts and Matt Frevola. Roberts is coming off a loss to the veteran Jim MIller, but he had previously won consecutive bouts. Frevola is unbeaten in his last three outings, with back-to-back wins coming after a draw against Lando Vannata. These two fighters love to put on a show and have the gas tanks to make it a war for the entire 15 minutes. Regardless of the winner, these two men will set the bar high for potential “Fight of the Night” honors.

Petela: A salad. This card is light in more than one way. Not only are the headliners a pair of fighters in the lowest weight class that the promotion carries, but there isn’t a ton of depth beyond the main event.

Sumian: The NBA playoffs and Bellator MMA. As much as we love the UFC, this card deserves little attention. Sure, there will be a few fun fights, but this show does not require seven hours of undivided attention. Feel free to go back and forth between this event, NBA playoffs and Saturday’s Bellator 246 show (and check out our colleague Julius Choi’s preview of that lineup over here).