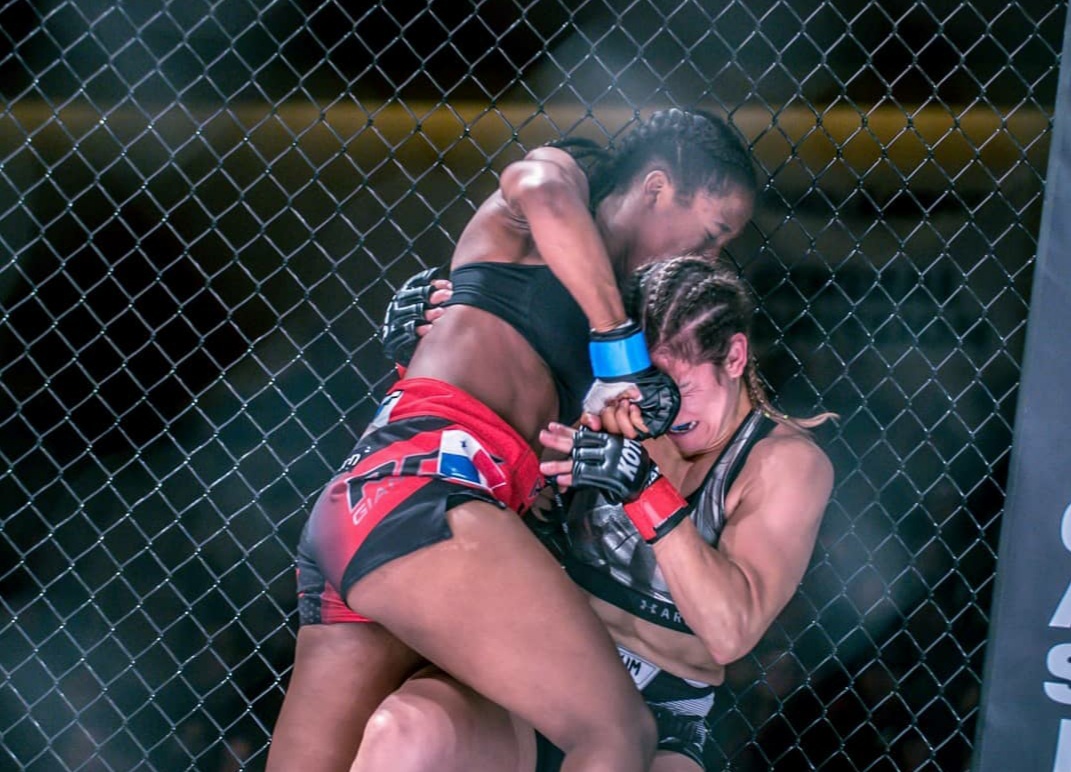 UFC on ABC 1 delivered with a fun card and some really good match-ups. The lineup included two female bouts, one between Sarah Moras and Vanessa Melo and another that pitted Yanan Wu against Joselyne Edwards.

I also previewed Claire Guthrie’s fight against Nadine Mandiau, but I was unable to watch that Legacy Fighting Alliance contest due to work and have yet to see it. From what I understand, it was all Guthrie as she cruised to a decision win.

After my review of the UFC on ABC 1 fights, I will give a brief synopsis of the midweek UFC on ESPN 20 card’s female fights. It won’t be my normal extended preview, but it’s a little something extra.

This fight surprised me, at least from the Moras side. Melo was able to take the decision nod over “Cheesecake.”

We knew going in that the power advantage lied with Melo. Really, all the striking advantages belonged to her. With Moras being so good on the ground and willing to take a fight there however she had to, even if it meant being on bottom, one would expect that this is where she’d try to take Melo.

Right from the start, Melo landed good, hard punches that had Moras backing up and moving around. Melo didn’t keep her head on the center line this time, either. That had been an issue for her in the past. She did not do it here, though. This made Moras’s problems twofold. First, she couldn’t punch her way in. Additionally, the constant backing up and circling also made it hard for Moras to get the clinch or takedown. You can’t take someone down if you’re moving backwards.

Melo was clearly feeling confident and happy with the way the fight was going. She had zero fear chasing down Moras and moving forward. The only minor issue for Melo — and it really is minor — is that she often followed Moras instead of cutting her off. What’s the difference? Well, chasing allows the person to keep circling and moving away, whereas cutting off someone closes their space and limits their ability to escape. Think of a cat chasing a mouse. If the cat just keeps running after the mouse, the mouse can run free all over the house while the cat is forced to try to catch up. However, if the cat corners the mouse, then the left-to-right movement is gone. The mouse is stuck there and eventually will run out of space to move in any direction. That leaves the mouse at the mercy of the cat.

As the bout moved into round two, it became clear that Moras was choosing to stay on the feet. Perhaps she felt she was doing good there? It might have served her well to at least feint some takedown attempts, even if she didn’t plan to actually try to finish the takedown.It would have maybe slowed down Melo’s forward progress if the fear of getting taken down was there. This can slow down the aggression of an aggressive fighter. In addition, it can also help to get them to drop their hands. Once you feint a takedown, you put that thought in their head. Feint a second takedown and a third, and then they will start to lower their hands. That’s when you can come up high with power punches or a head kick. Without any such threat looming, Melo had zero fear and could again continue chasing down Moras and landing strikes. Melo was fighting a smart, tactical fight. Moras was in some ways allowing her to do so.

By the start of the third round, it seemed Moras was going to need a finish. Her reaction to the decision shows that she didn’t agree with that assessment. Moras did have a better third round, and two of the judges agreed. She was finally able to mount some offense of her own and started landing some good shots. However, it seems she was confident that winning the third frame was enough to give her the fight. She wasn’t looking for a finish. Instead, she was just trying to get the round. Meanwhile, Melo seemed to look more like the one who was trying to land “finishing” strikes.

Listen, I hate the saying “don’t leave it to the judges.” That’s often out of your control. No one is trying to go to a decision. If the finish isn’t there, it isn’t there. However, Moras seemed to assume she was doing enough to get the nod. You can’t do that.

What’s next for Melo? I’ll get there in a bit.

This fight went pretty much as I expected it to go, except for round one. In the end, Edwards claimed the unanimous decision.

While getting it to the ground might have been a good tactical idea for Yanan, I didn’t expect it to actually go there. It did, and it did so early. Yanan got on top and had some success, but some nice scrambling by Edwards put her on top. Edwards did some damage from there. When it got to the feet, Edwards was the aggressor and used her speed and power advantages to seal the round. As much as the round went to Edwards, I really liked what Yanan was trying to accomplish. From a strategy perspective, she was on point and had optimism for the fight going forward.

Then came round two. Again, Edwards used her power and speed to outland Yanan, who did a better job than she did in her fight with Mizuki Inoue as far as not being bullied and instead trying to stand toe-to-toe with her opponent. Yanan landed some nice shots of her own, but it was a clear Edwards round.

I would have liked to have seen some kicks, especially maybe front kicks and even more so push kicks, from Yanan. Those could have served her well to keep Edwards back a bit and make her reset more often. This would have given Yanan time to get in more offense of her own.

Edwards fought a very Edwards fight. I can’t sit here and say what she did wrong or right, because she did what she does and it was working for her. Edwards wasn’t afraid to mix it up and turn the contest into a boxing match. She knew she was going to win the fight there, and she saw that Yanan was willing to engage in that type of fight.

Round three was more of the same. Yanan did have a better round, and a case could be made to even give her the frame (I didn’t). She had some increased activity and landed some of her best shots of the fight, while Edwards slowed a bit. The biggest problem that Yanan had was that she didn’t want to engage on the ground. She saw that Edwards is good off her back, and perhaps she was also worried about the scrambling ability of Edwards. She might have felt her best chance to get a needed stoppage was with her hands. Yanan could have been right in that assessment, but she was at a speed and power disadvantage.

I don’t think Yanan fought a bad fight. She didn’t necessarily do anything wrong, and she looked better than in her previous outing. She just wasn’t able to compete with Edwards in the area where the fight took place. She might still have had problems even if it went another direction and was contested on the ground more. Edwards is not yet a top-10 fighter, but she has the potential to be one. Edwards does some things very well and will improve. If brought along properly, she can certainly become a top fighter. There is no shame in the loss for Yanan or in how she fought as far as I am concerned.

What’s next for Edwards? The night’s other winner, the aforementioned Melo, makes sense. They are on the same schedule and are both coming off their first UFC win. They have to be considered at about the same spot in the division’s standings, too. Stylistically, it could be a really fun fight. These two ladies have power in their hands and aren’t afraid to come forward to slug it out. Sign me up for that one!

Now for a quick little bonus preview of Wednesday’s fights at UFC on ESPN 20.

This could be a very exciting fight, especially if it goes to the ground. I tend to lean toward Araujo’s top game, but heavily lean toward Modafferi’s ground game. One has to assume that this fight will hit the mat eventually, and it will become quite the chess match at that point.

Both ladies have very good submissions, and they can be expected to be cautiously aggressive. If they spend a large amount of time on the ground, then it is going to favor Modafferi. However, when two fighters are so good on the ground and respect each other so much there, the fight can end up staying on the feet instead. I don’t expect that here, but it might be to Araujo’s advantage to let it happen. The Brazilian has the power advantage, and while Modafferi’s striking is constantly improving, Araujo can hold the edge if she can get inside.

This one’s pretty simple. If Fiorot can keep it on the feet, then she’s in good shape. She’s the better striker and has the power advantage. She’s also fighting someone who can be hit. This is not to say Leonardo is a pushover on the feet, but Fiorot has the edge there.

Fiorot will want to not be overly aggressive and make a mistake. If she does, then it could lead to Leonardo takedowns. I’d favor Leonardo on the ground. She is sneaky and can get out of bad positions. Once she gets an opponent in a bad situation, they are in trouble.

The first round will be very crucial in this one. The fighter that sets the pace, jumps out to the lead, and puts doubt in the other’s mind is going to be in a good position the rest of the way.

That’s all for this week. Thanks as always for reading. Enjoy the fights on Wednesday. I will be back Thursday with my extended preview of the female bouts for UFC 257.