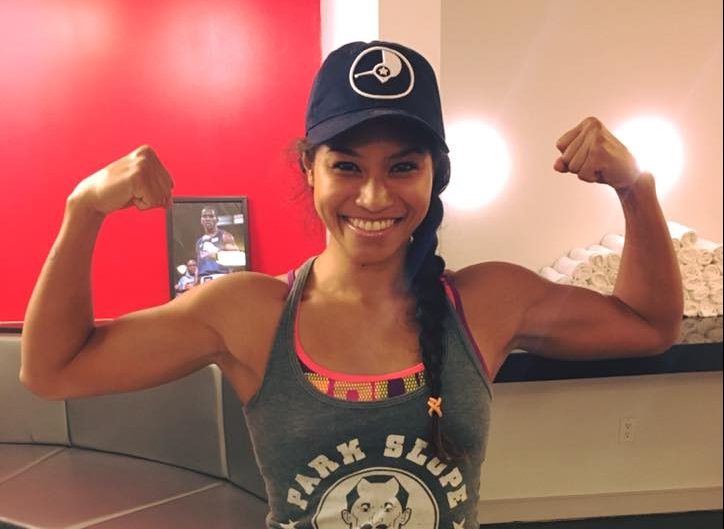 Retired Navy SEAL and motivational author David Goggins once said, “The mind always has a tactical advantage over you.” In other words, your own mind is often your own worst enemy. While relevant to all aspects of life, this is especially true in combat sports.

Olympic boxer Jennifer Chieng was not a lifelong athlete like many of her peers in combat sports. She never even trained in combat sports until after she graduated from Wells College with a degree in Economics. After college, she found a job in corporate accounting.

Chieng graduated at 21 years old. While she was good at what she was doing in the corporate world, there were deep roots in her mind that were always pulling her in a different direction.

“When I was in high school, I was always really drawn to martial arts,” Chieng admitted. “My first exposure to combat sports was watching boxing on TV. My dad was a huge Muhammed Ali fan, and he would always watch these old videos

“I’m seeing these two individuals who are in a closed space, and I was like, ‘Who would ever want to do that?’ You have two people trying to beat each other into a pulp, but something about it just drew me in and captured my interest. There was something in me that was always hungry for a challenge.”

As Chieng was growing up, there weren’t a lot of options for her in the boxing realm, but she really wanted to try wrestling. Her parents didn’t want her to get hurt, so they let her try volleyball instead. She wasn’t into it at all, though.

After college, she moved to New York City. It was there that her horizons started to broaden.

“I realized that I now had the means to start training,” Chieng said. “I walked into Gleason’s, and as soon as I started my training, I realized this was what I wanted to do, because it really sparked that competitive nature in me. I’m most competitive with myself. There is no quit in me.

“I realized I still needed to challenge myself. There was something in me that I didn’t feel I was doing enough to be fulfilled. What drove me was that curiosity to try boxing. I always wondered about it, and those questions from my childhood remained.”

Gleason’s Gym in Brooklyn is home to a ton of great boxers and other martial artists. This includes Heather Hardy, who is 22-1-1 as a pro boxer and 2-2 as a pro MMA fighter. The gym was a great entry point into boxing for Chieng, even if she was off to a late start.

“I had a lot of catching up to do,” Chieng said. “I had the will and determination to do it anyway. Because it was such a challenge for me, I was driven to do it.”

Chieng made her amateur boxing debut against Flore Hani in July 2013. She went on to win some and lose some, but eventually scored a gold medal at the Pacific Games in 2015. This led to a shot at the 2016 Summer Olympic Games, where she lost to Mikaela Mayer. While it wasn’t the outcome she desired, she did learn a lot about what it takes to train at the highest level.

“It’s tough,” Chieng said. “You have to train every day. You have to train even when you don’t want to. The training has to get done. There are days you lose motivation, but those are the days where training matters the most. I think the biggest challenge is the mental aspect. Your mind knows your fears, and it has an advantage over you. If you give into that, it’s over.”

Upon returning from Rio de Janeiro, Chieng jumped right back into training. She loved boxing, but she felt she could do more. She started working to hone her MMA skill set at the Renzo Gracie Academy while still spending time at Gleason’s.

“I came back to New York and started throwing in kicks and jiu-jitsu, and it got me thinking,” Chieng explained. “There were all these other tools that were available to me. That’s what got me started — I wanted to be a more well-rounded fighter. Any combat sport you get involved in will challenge you mentally and physically, and I’m the type of person that thrives on challenge. It forces me to be brutally honest with myself.”

Chieng made her pro MMA debut at Bellator 208 in October 2018. She scored a TKO win over Jessica Ruiz in the first round. After four amateur fights that had ended in decisions, this was the first stoppage of her MMA career.

“I didn’t expect it to happen,” she admitted. “I capitalized on the opportunity when it presented itself. I wasn’t sitting there thinking about it. I had a strategy, but anything can happen in a fight. You have to be quick and able to make those adjustments.”

For a number of reasons, Chieng hasn’t fought in MMA since that debut appearance. She continued boxing, scoring another Pacific Games gold medal and also suffering a couple of decision losses. She was also training for another Olympic run earlier this year before the coronavirus (COVID-19) pandemic struck and wreaked havoc on sporting events worldwide. Chieng wanted to continue training for the Olympics, but she also wanted to continue her MMA career. At 34 years old, she still feels she has a lot to accomplish.

With Renzo Gracie’s gym shut down, Chieng continued to train as much as she could. She was eventually able to get into the MK Muay Thai gym in New Jersey. However, she didn’t really know what sport to focus on.

“If I had more hours in the day, I would do both,” Chieng said. “Everything was just shut down. I had no training partners. So, I did what everyone else did, and I just tried to adapt. My training scaled back significantly. I did what I could do.”

Once the MMA wheels started moving again, Invicta FC started to show interest in Chieng for one of its upcoming cards. The company knew that she wanted to compete in the rescheduled 2021 Olympics in boxing, but that she was otherwise open to compete in MMA again.

“I told them I didn’t know when the next qualifier would be, but I had to keep training,” Chieng said.

A couple months ago, Chieng got the official word that she was scheduled to face the aforementioned Hani in a strawweight battle at Invicta FC 42, which takes place tonight, September 17, and airs live on UFC Fight Pass. However, the day before the event, Hani was forced to withdraw. Invicta quickly secured a new opponent for Chieng: Helen Peralta.

Peralta is 2-1 as a pro. Her last two fights were back-to-back wins in bare-knuckle boxing competition. Her striking prowess is her strong suit, which should make for a great war with Chieng.

Chieng has come a long way since Wall Street, but she’s still just getting started. She has her sights set on both MMA glory and boxing gold. Her mind has the tactical advantage, but she keeps pushing through. This will all be on display when she steps into the cage to kick off Invicta FC 42.