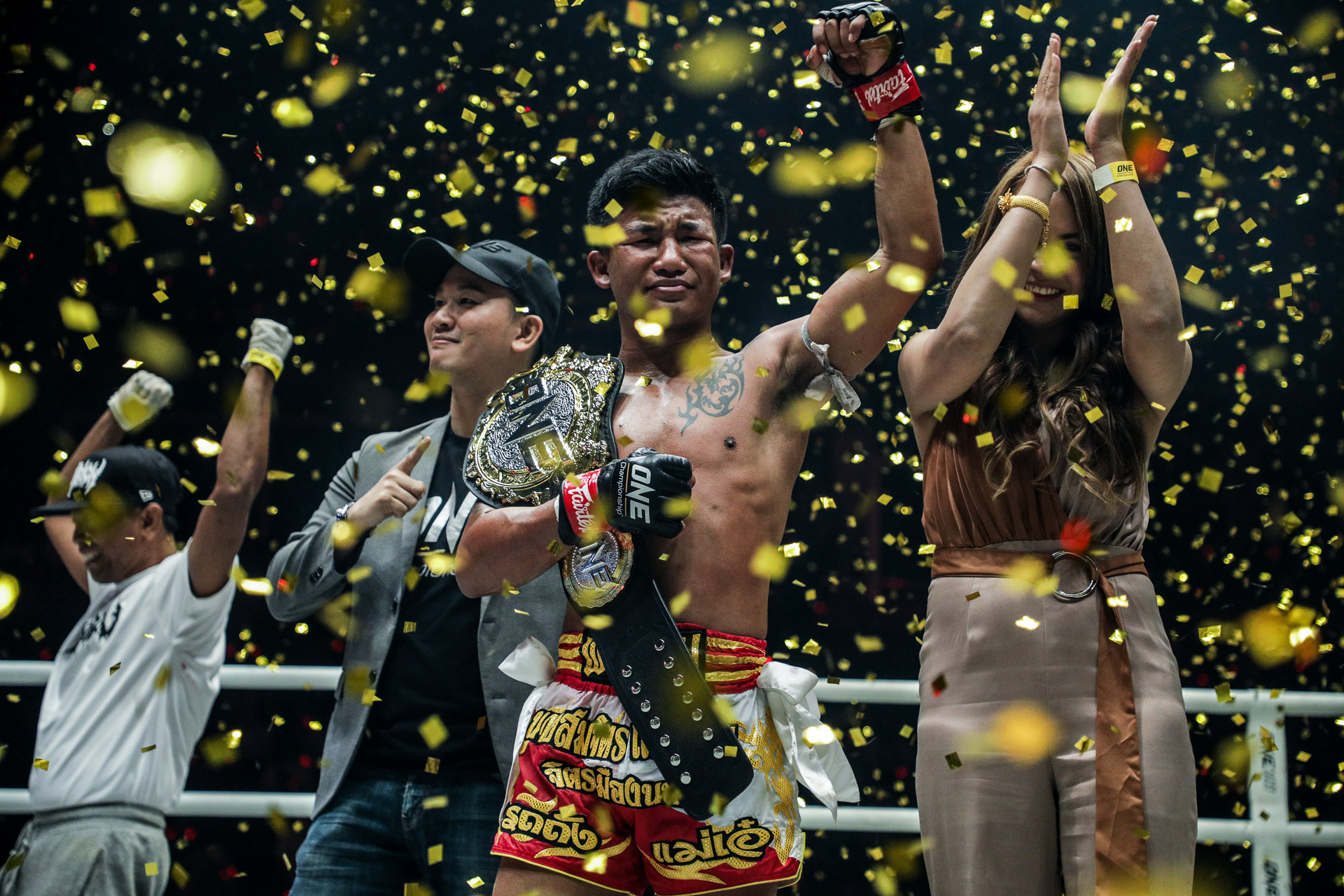 ONE Championship: No Surrender Preview and Predictions

ONE Championship has been on a lengthy hiatus due to the coronavirus (COVID-19) pandemic, but now the organization is getting back to business. Better yet, the company has put together a kickboxing and Muay Thai lineup that should have fans salivating.

The top two contests in the lineup are Muay Thai title fights, but perhaps the biggest kickboxing bout of the year is also featured on this show. Sitthichai Sitsongpeenong and Superbon Banchamek are two of the best strikers in the world, and now they’re set to meet in a rubber match. The 28-year-old Sitthichai was able to knock out Superbon in their first fight in early 2016, but he came up short on the scorecards in a rematch later the same year. Sitthichai has gone an outstanding 11-1 since his last clash with Superbon. Meanwhile, the 29-year-old Superbon has been very prolific, racking up a 19-2 mark since their second fight.

The evening’s official headliner is the flyweight Muay Thai championship tilt between Rodtang Jitmuangnon and Petchdam Petchyindee Academy. The 23-year-old Rodtang is set to make his third defense of the belt, but he’s also out to rebound from a loss outside of the promotion. Petchdam, 22, is a former ONE flyweight kickboxing titleholder, but now he’s on the hunt for Muay Thai gold within the organization.

The other Muay Thai title fight pits Petchmorakot Petchyindee Academy against Yodsanklai Iwe Fairtex for the 26-year-old Petchmorakot’s featherweight crown. Petchmorakot became the inaugural champ in February, and this will be his first defense of the strap. Yodsanklai gets the title opportunity despite losses in his two most recent outings.

The six-fight lineup also includes two MMA bouts and one additional Muay Thai affair. In MMA, the featured star in Stamp Fairtex, who remains undefeated through four fights and will look to extend her winning streak when she meets Sunisa Srisan. The Muay Thai scrap pairs Panpayak Jitmuangnon with Superlek Kiatmoo9 in a battle of flyweights.

ONE Championship: No Surrender takes place at the Impact Arena in Bangkok, Thailand on Friday, July 31. The fights start at 6:30 a.m. ET and can be seen via pay-per-view stream. Such a stacked card requires an all-star preview panel, and so Combat Press writers Zachery Aittama, Rob Tatum and Bryan Henderson combine to break down the action.

Let’s be honest: the highlight of this card is the showdown between Sitthichai Sitsongpeenong meets Superbon Banchamek, which is perhaps the best kickboxing affair to be booked in several years. Which of these fighters wins the pair’s rubber match?

Tatum: The financial landscape of the kickboxing world has been shifting for quite some time. For some time, fighters were left to pick between larger paychecks in China or more notoriety with other combat-sports fans under the GLORY banner. Now, in 2020, both of those avenues have largely dried up or been forced to undergo significant changes. The misfortunes of others — GLORY recently filed for bankruptcy — has been a win for ONE, despite its own questionable financial situation.

That said, being able to put together the rubber match between the second-ranked Sitthichai and fourth-ranked Superbon is a huge boon for the Asian promotion. As it continues to expand its footing in kickboxing and Muay Thai, this is the type of match-up that will draw eyeballs from across the globe. The pair split their first two meetings, with Sitthichai knocking out Superbon in the first fight and Superbon getting revenge on the scorecards in the second battle.

Sitthichai long reigned over the GLORY lightweight division and the Combat Press pound-for-pound kickboxing rankings thanks to his dominant style and precision inside the ring. However, GLORY repeatedly fed him to Marat Grigorian, and the fifth time was the charm for his Armenian foe. This allowed the Thai fighter to leave the promotion. Now, he returns to Asia and looks to regain his championship form and prove that his previous knockout win over his fellow countryman was no fluke.

Superbon may not have the same fanfare among casual kickboxing fans as his opponent, but hardcore fans are well aware of the skill possessed by the 29-year-old. While Sitthichai was focused on GLORY, Superbon did most of his work under the Enfusion and Kunlun banners. His only losses in the past seven years have come against Sitthichai, the aforementioned Grigorian, and top-10 welterweight Endy Semeleer. That’s not a bad resume, to say the least.

In the four years since the two Thai stars last met, Superbon has been far more active. However, he has faced lesser competition since his loss to Grigorian. Sitthichai has been in the ring less, but he has looked thoroughly dominant throughout his GLORY run. This is as close a match-up as you will see in the sport, and these two have history together. Expect Sitthichai to be hungry for revenge after dropping the last fight. He’ll outwork Superbon en route to a closely contested decision win.

Two Muay Thai champions are set to defend their belts at this show. At flyweight, Rodtang Jitmuangnon has to fend off Petchdam Petchyindee Academy. At featherweight, Petchmorakot Petchyindee Academy defends against Yodsanklai Iwe Fairtex. Will the promotion crown any new champions this weekend?

Aittama: Due to the current pandemic, Rodtang hasn’t fought since he lost a five-rounder to Kaonar P.K.SaenchaiMuaythaiGym at Rajadamnern Stadium. He is known for being in crazy wars, most notably against Jonathan Haggerty and Tenshin Nasukawa. He is not the best Muay Thai fighter in his weight class, but he is always in the mix and holds two wins over current Rajadamnern champ Saeksan Or. Kwanmuang within the last year. Petchdam has a solid kicking game and is the bigger fighter, but Rodtang has a relentless pace and a reputation for breaking his opponents with pressure. He has a diverse offensive attack behind his forward movement, and Petchdam won’t be able to keep the pace for five rounds. It’s doubtful that Rodtang stops Petchdam, but he will earn the nod from the judges.

Yodsanklai had a good chance to win against Petchmorakot, but he is on the backside of his career and was plagued with long-term injuries over the last few years. He was knocked out for the first time in over a decade in his last fight against Jamal Yusupov, who should have been an overmatched opponent. Yodsanklai, who was still a top-10 kickboxer until last year, has slowed down physically, which takes away from the marauder style that he once used to out-class, overpower, and often knock out his opponents with crisp boxing combinations.

Petchmorakot has a strong clinch game and good counter attacks. He has a strong left kick and uses a more traditional Thai style than Yodsanklai, who has become more focused on boxing late in his career. Petchmorakot was given the opportunity to fight for a title following a win under the rule set with which he is more familiar, and the former two-time Lumpinee champion bested Pongsiri P.K. Saenchaimuaythaigym to capture the strap.

Yodsanklai went to war with Samy Sana in 2019 in one of the best kickboxing fights of the year during the featherweight grand prix, but he ended up losing the bout in an upset and fell out of the tournament field. In the same bracket, Petchmorakot initially was given the decision against all-time great and eventual tourney winner Giorgio Petrosyan, but the promotion re-evaluated the decision and decided to overturn it due to Petchmorakot’s use of the clinch. Petchmorakot and his team refuted the claim by putting out a video showing they were within the rules to use the clinch and knees. He fought Petrosyan again and lost a close decision.

This fight comes down to who can control the range of the fight. Petchmorakot has a clear advantage offensively and defensively in the clinch, but Yodsanklai has deadly power and a diverse array of elbows. Petchmorakot’s experience fighting under Thai rules will be the advantage that turns the fight in his favor. Yodsanklai has basically only competed in kickboxing since 2013. There is always the possibility that Yodsanklai catches Petchmorakot with his hands and puts him to sleep, but it’s not the most likely outcome.

The lineup also includes two MMA match-ups. Is there anything here that should draw the interest of fans?

Henderson: The MMA portion of this event will be largely overshadowed by all of the action in the kickboxing and Muay Thai realms, but that doesn’t mean these are throw-away fights. In fact, ONE has actually included one of its former kickboxing and current Muay Thai champs who is on a campaign to add an MMA title to her trophy case.

Stamp Fairtex is the centerpiece of the MMA offerings on this card. She topped Kai Ting Chuang to capture the company’s atomweight kickboxing crown and then edged Janet Todd to become the promotion’s atomweight Muay Thai champion. She successfully defended the Muay Thai belt with a win over Alma Juniku, but she dropped the kickboxing title to Todd in February. In MMA, she’s already scored four victories, including two first-round finishes. On Friday, she continues her march toward an eventual title shot when she meets fellow undefeated fighter Sunisa Srisan.

Srisan has compiled a strong resume through three fights. She stopped all of her opponents under the Full Metal Dojo banner, but those contests took place in 2016 and 2017. Srisan, now 19-years-old, has not seen MMA action in three years, and all of her previous bouts came against rookie competitors. While she has a bright future in the atomweight division, she’s likely to be outclassed on the feet by Stamp.

Srisan’s strategy might be to test Stamp’s wrestling, but the decorated star should be skilled enough to shut her down and score a knockout victory.