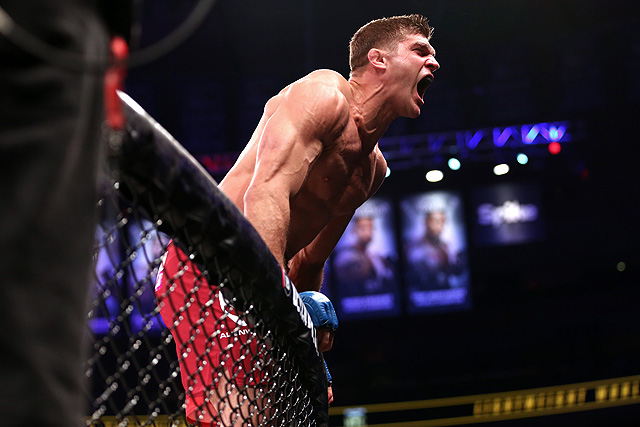 The distance between Thackerville, Okla., and Dublin, Ireland, is 4,418 miles. This weekend, though, these two locales will seem much closer to each other. They play host to a Bellator MMA doubleheader. After Friday’s Bellator 239 show in Oklahoma, the attention turns to Dublin on Saturday. The focus of the evening is split between a three-fight Bellator Dublin main card and a five-fight Bellator 240 affair.

The Bellator 240 portion of the show features Brent Primus, as the lightweight attempts to build back toward another title challenge. The former champ was set to meet Peter Queally, but an injury led to the Irishman’s withdrawal and the short-notice opportunity for Scotsman Chris Bungard. Primus seeks to build on his gogoplata submission of Tim Wilde, but Bungard would love to score the upset and build on his current 2-1 promotional record.

The marquee bout for Bellator Dublin is a women’s featherweight clash between Leah McCourt and Judith Ruis. McCourt wants to add to her current three-fight winning streak, but Germany’s Ruis stands in her way. Ruis is also out to extend her current streak, which sits at two wins, but this is uncharted territory for the 6-4 fighter who had never previously scored back-to-back victories until 2019.

Saturday’s show takes place at 3Arena. It all starts at 11:30 a.m. ET with the preliminary card on Bellator.com. Bellator Dublin is set to follow on Bellator.com at 5 p.m. ET. The Bellator 240 portion of the show can be seen on the Paramount Network at 10 p.m. ET.

Scotland’s Bungard, who steps in on just a few weeks’ notice for the injured Peter Queally, seems more like a keep-busy fight for Primus while also serving to give Bellator’s trip to Ireland the significant name it needs via the former champ’s presence. The 31-year-old “Bad Guy” has only appeared with the company during trips to the United Kingdom and has never even been a fixture in a major organization in Europe. He’s made a stop with BAMMA and popped up on a few other bigger shows in the region, but he’s suffered losses along the way to a fighter with a 5-9 record and to Colin Fletcher, a UFC castoff who is the epitome of inconsistency.

Primus dished up a healthy serving of overratedness when he took home the Bellator crown after an ankle injury brought a premature end to Michael Chandler’s night. Outside of that one huge evening for the 34-year-old, all we’ve seen is split decisions over Derek Anderson and Gleristone Santos, a loss in the rematch with Chandler, and the nice gogoplata finish of Tim Wilde. He’s been good, but he hasn’t been a runaway title contender.

Still, good is plenty when booked in the right fights. Primus should breeze through this contest, which is exactly what Bellator would like to see. If he can win a few more fights, even if it’s in the form of a squeaker or two against a fellow contender, it gives Bellator the ability to book a trilogy fight with Chandler.

Bellator Dublin’s headliner pairs Leah McCourt with fellow featherweight Judith Ruis. Are we looking at a future challenger for Cristiane “Cyborg” Justino when the dust settles on this bout?

Bellator isn’t that desperate for title challengers in the women’s featherweight division right now. That’s not meant as any sort of disrespect toward these two ladies, but McCourt needs more time to gain experience before establishing herself as a title challenger and Ruis has to improve upon a rather middling record that sits just two wins above the .500 mark.

McCourt could be a European star for Bellator in the years to come. The 27-year-old trains out of SBG, albeit not the same chapter as superstar Conor McGregor. She’s posted three wins through four pro outings, but her competition has been relatively mild. The 2016 IMMAF champ, who went 6-1 overall at the amateur level, lost her pro debut, but she rebounded with a split nod over rookie Manon Fiorot and first-round stoppages of Hatice Özyurt and Kerry Hughes. Unfortunately, Özyurt and Hughes both had losing records at the time and now possess a combined mark of 5-12.

Ruis has been on a roller-coaster ride for much of her pro tenure. She debuted with a win in 2014, but lost her sophomore outing to Stephanie Egger. Another win was followed by a setback against Katharina Lehner. A submission victory over Melinda Fábián — the highpoint of the German fighter’s career thus far — was followed by a loss to a 1-1 foe. The cycle continued through the conclusion of 2018, with Ruis dropping a decision to Reina Miura in Japan just one month before the new year. In 2019, she finally put together back-to-back wins via first-round submissions.

Ruis is clearly overdue for another stumble, and McCourt is a solid candidate to hand her that loss. The Irish fighter should get the better of Ruis regardless of where the fight takes place. McCourt showed off her grappling skills often as an amateur, and she should be able to tap Ruis to close out the first of the evening’s two main cards.

Aaron Chalmers sure isn’t boring. The 32-year-old is six fights into his pro career, and he’s never gone the distance. His first four fights ended in the first round. His lone loss made it into the third frame, and his rebound win ended in the second stanza. His best opponent was 2-1 entering their match-up, and his loss came to a 4-2 foe.

That makes his fight against Austin Clem on the Bellator Dublin main card into a potential thrill ride for however long it lasts. Clem has been equally allergic to the scorecards in his pro run. He won his 2018 debut via a second-round choke. His loss came in his sophomore fight when he was stopped via strikes in the first round by Kevin Brown Jr. His return to the win column has consisted of rear-naked choke finishes of Frank Byers and Kyleb Collins.

This is Clem’s Bellator debut, whereas Chalmers has had his last three contests with the company. “The Joker” should be comfortable by now in the Bellator cage and ready to dispense yet another quick finish, but Clem is just as likely to capitalize on a mistake by his opponent. Chalmers better protect his neck.