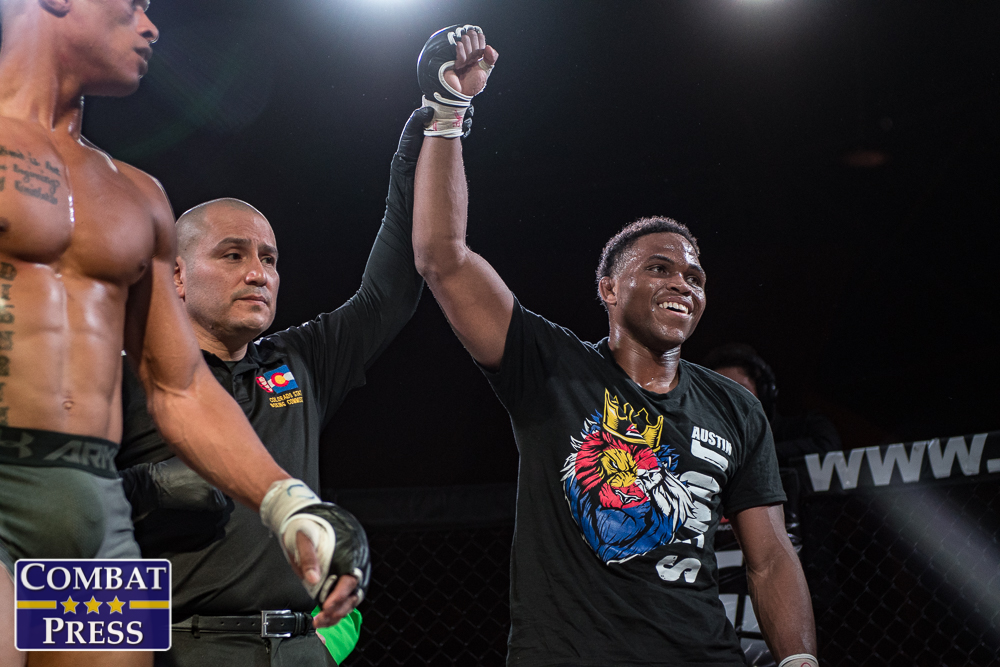 How hard do people really work to achieve their dreams? This is a really difficult question for most people to answer. Between ego and the human condition, most people think they are putting in maximum effort, even if they are not.

Austin Jones grew up in Aurora, Colo., where he was a wrestler and football player as a kid. He was a standout at Smoky Hill High School, but applications to several schools for college football didn’t result in a scholarship. However, he never gave up on his dream. He got accepted to the University of Nebraska, and walked onto one of the most prestigious programs in the game.

“It was pretty crazy,” Jones told Combat Press. “It’s one thing to go to college in your own state. That’s a big move when you’re young. To go out of state and planning on playing football — not knowing what’s going to happen — is even more crazy. I just had a strong passion for the game that I was like, ‘This is my last shot. I just want to see if I make the team.’ It was crazy. I was one out of 30 guys picked. It was nerve-racking.

“Usually, kids coming out of high school are partying with their friends the last time before they go off to college. I was on the football field every morning — sometimes nights — just trying to make that team. I felt prepared going into it, but I was super nervous. It was good.”

Growing up a Colorado native and being a Nebraska Cornhusker football fan seem like opposing ideologies. While one of the fiercest rivalries in college football history has always been the Oklahoma-Nebraska rivalry, former Colorado head coach Bill McCartney formed the idea of a rivalry with Nebraska in the late ’80s, which carried forward for about a decade and a half. While the Huskers hold a 49-19-2 record over Colorado, dating back to the 1800s, the Buffaloes had one major win 17 years ago that went down in infamy. This was a game that started to shape the future for Jones.

“It was funny, because 2001 was the CU-Nebraska game here in Boulder, and my dad took me to the game,” Jones said. “Nebraska got blown out, but I was still a Nebraska fan for some reason. The fans were so cool. Even though we were losing pretty bad, the fans were still cheering on, and you really don’t get that with a college team, you know?”

Jones did land a scholarship by his senior year of college, which was the 2011 season. While he didn’t get a shot to move to the next level, his time in Lincoln, Neb., would prove to be important for his post-college future.

“I was still playing football, and we would go to the Fat Toad on O Street, because it was the only place showing the UFC fights,” Jones explained. “This was back when ‘Rampage’ [Quinton Jackson] and B.J. Penn were like champions. It just popped into my head, ‘Hey, if I don’t make it in football, I should try this out.’ I wrestled in high school and everything, and I found out a lot of wrestlers were doing it. I didn’t really know anything about the sport. Eventually, I bought a punching bag and hung it up in my basement.”

As pro day came and went, Jones discovered he would not be moving on to the NFL. He moved back to Aurora and joined MMA veteran Bobby Lashley’s gym, American Top Team Altitude. Another local coach, Marc Montoya of Factory X Muay Thai, was cornering Lashley for one of his Bellator fights. This is when Jones and his future coach first met.

As 2015 started to wind down, ATT Altitude was closing up shop. Jones was looking for a new gym. With only one loss on his amateur record and a good start to his pro career, he landed at Factory X. While at one point owning a 3-4 pro record, Jones is now 6-4 and on three-fight winning streak. He attributes his current success to one thing.

“My failures,” admitted the former running back. “I had a really good amateur career. [I] started as a pro and went through a little bit of a setback with three losses in a row. What I got from the losses were the lessons in it. Marc told me to just stick with it, and he kept reminding me that I’m making that progress. It’s funny, because when I joined Factory X, there were like 20-25 fighters there. Slowly, but surely, all of these UFC guys kept coming in, and Marc said he purposely put me in with those guys. I got beat up quite a bit in the gym, but that’s what made me better.”

Jones does not exactly have a history of quitting. In fact, most of his athletic career has been centered around overcoming adversity and doing the things that other people either won’t or can’t do. His current winning streak includes three formerly undefeated guys. His last fight, which took place at Legacy Fighting Alliance 48 in September, ended as a split decision in his favor over Duane Johnson.

“I was really, really happy with that performance,” Jones said. “If you look on Tapology, it said I only had a three percent chance of winning. The guy was undefeated. He hadn’t lost in seven years. He was a Golden Gloves champ, and he decided to hit me with the mental-warfare game. I just kept my composure the whole time. I didn’t feel any pressure going in there. He was the undefeated fighter, and I was the guy he was supposed to beat. I went in there with a chip on my shoulder. I’ve been doing that a lot lately.”

When nobody expected Jones to play NCAA Division I college football, he played. When nobody expected Jones to win his last three fights, he won. Overcoming the odds is the name of the game for the 29-year-old athlete. His next big test comes on Friday night at LFA 57 in Broomfield, Colo. He will be on the main card on AXS TV when he faces fellow welterweight Calen Born, who fights out of Kansas City, Kan.

“He fought on the card I was on last,” Jones explained. “He fought Kassius Kayne. They had a close fight, and I think it went to decision. I actually met him in the locker room. He’s a real nice guy. He’s a respectable opponent. I think it’s going to be a good challenge. I’ve pretty much accepted the path that, even though I don’t have the best record right now, they are still going to match me up with the toughest guys. I’m just kind of welcoming it.”

In keeping with his current theme, Jones is facing a fourth undefeated opponent in a row. Born’s only MMA loss came as an amateur in 2012. Since then, he has finished all but two opponents across his combined amateur and pro careers. Once again, Tapology has Jones as a heavy underdog, with only 10 percent of the vote. He will take that prediction with open arms, though. This all goes back to his days as a Husker.

“Going in as a walk-on, there was really no room to slack at all,” Jones said. “There’s no room to be late. There’s no room to miss practice. There were guys there who didn’t necessarily take advantage of that full-scholarship opportunity. For me, I was trying to earn a scholarship and trying to compete for that spot. So, I really just took that mindset and transferred it over. I’m just taking it one practice at a time, one day at a time, and really understanding the mental side of the game.”

Jones left Nebraska with a degree in Communication Studies, a penchant for acting, and, most importantly, an unbeatable work ethic, which has set him up for a bright future in MMA. While he would love to be the next Hollywood action star — the next stop on his journey — making a name for himself in the world of combat sports is his current priority. On Friday night, he will get the chance to show the world that his hard work and mental strength is continuing to pay off.

“I really just think each time I fought, I’ve gotten so much better,” said Jones. “I never put on a boring fight. I use my athleticism, and I’m really starting to shape into myself as a martial artist. I believe I’m a humble guy, and that’s why I’m standing out. I think a lot of guys are talking trash to get their name known, and I really just want to show people my abilities, rather than just saying it.”

Jones would like to thank all of his coaches, training partners, and sponsors at Factory X Muay Thai, Landow Performance, Denver Chiropractic, Denver Sports Recovery, Receptra Naturals, and Comments from the Peanut Gallery Podcast.