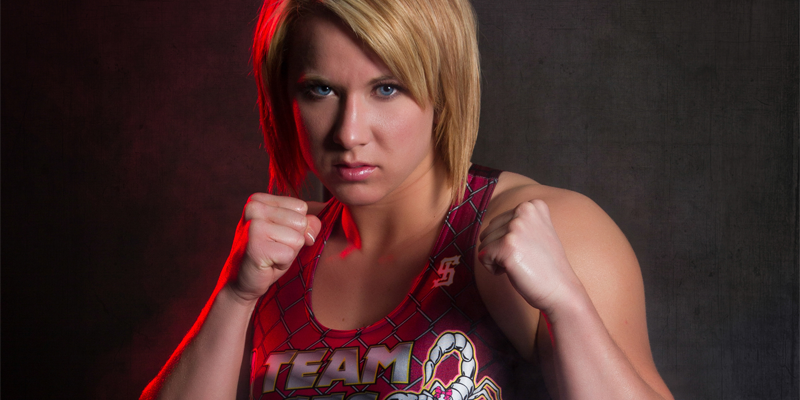 Injuries are frustrating, but you’d be a fool to think that they aren’t bound to happen when you compete in sports, especially in a physical, daunting task like MMA. The wear and tear your body experiences can be felt in any sport, though, from soccer to basketball to rugby.

We’ve seen injuries take their toll on many an athlete. Just look at the upcoming NFL season and you’ll realize injuries are unfortunately all too common place. Jordy Nelson of the Green Bay Packers will miss the upcoming season due to an ACL tear. That is a devastating injury that will undoubtedly alter his career.

That’s same injury that befell Amanda “Bobby” Cooper, an up-and-coming mixed martial artist who has been pegged as a top prospect in the sport. However, instead of letting the injury deter her from achieving what is yet to be seen, Cooper is using this injury as a driving force to return to the cage better and badder than we’ve ever seen her.

“I tore my ACL, MCL and LCL and didn’t know it was super bad, because I was walking and training on it,” Cooper told Combat Press. “I trained on it and fought on it three times. My knee would pop out and I would just pop it back in, and by the end of the year it got really bad. Finally, my dog knocked me down the stairs and it completely tore. I couldn’t even drive to the hospital for a couple days because my leg was so bad.

“I am very happy I got my knee fixed, because it has allowed me to train better. I can do more than I could when I was hurt. I can kick, do live rounds, et cetera. It’s making me work harder and get better.”

With such a long time off, ring rust could be considered a factor, if you’re one who believes in such a concept.

“I haven’t really thought about the time off,” Cooper stated. “I wish I would have fought more, but I don’t think ring rust will be a factor. I am dying to get back into the cage, and that’s going to be a driving force when the bell rings and it’s time to go.”

Since going pro, things have changed a lot for Cooper. She trains differently, she eats differently and she goes about her day-to-day life differently. She knows that to get to an elite level and be the best in the sport, lifestyle changes are imperative. She is scientific about it. That way, she will be at the top of the sport at some point and eventually become the champion she knows she can be.

Her first test with Invicta comes in the form of top flyweight prospect Aspen Ladd, a 20-year-old who has still yet to make her full impact on the sport.

“I think the matchmaking gods are smiling on me when I got this fight,” Cooper asserted. “Aspen Ladd is definitely tough and skilled, but I definitely have the upper hand everywhere in this fight. She’s a good striker, good wrestler and good grappler, but she doesn’t stand out in one area. I have knockout power and really good jiu-jitsu, so I am dangerous in more than one area. She doesn’t stand out in one exact area, and that’s why I think this is a great match-up for me.”

It’s a fight that is a definite early “Fight of the Night” candidate and could provide great energy for the card early on. For Cooper, though, it represents the first of many fights that she wishes to have in the next year or so. Activity in this sport is incredibly important. Staying active not only pays the bills, but builds momentum for a fighter.

“I hope to have four or more fights in MMA, as well as some more pro boxing bouts in the meanwhile. I do the boxing to stay busy and get some extra money. Obviously, I would love to be undefeated a year from now and get toward the title picture.”

Injury may have held Cooper back for a while, but now she’s ready to go. Nothing will hold her back this time.