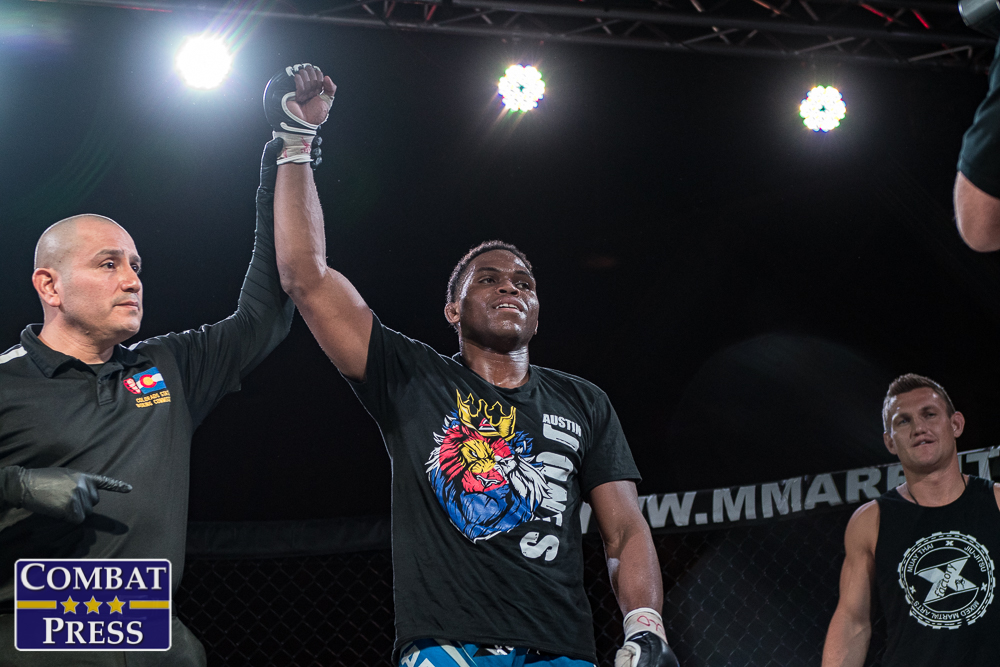 The world needs energy to operate. That energy can come from the sun, wind, water, or even fire. However, there is a nearly invisible energy that gets put into the atmosphere that comes from people. It’s known as positive energy, and one of the best sources of this energy comes from teachers.

Teachers don’t usually get paid a lot, but the energy that they put into the world can be unmatched. Martial-arts instructors are a great example. Whether it’s taekwondo, wrestling, kickboxing or jiu-jitsu, to name a few, martial arts instill confidence, skill and self-control in adults and kids alike. Sometimes, the teaching of martial arts can have as profound an impact on the instructor as it does the student.

Austin Jones has had many instructors and coaches in his life. He was a football player in high school who went on to play for the University of Nebraska in college. Upon his return to his hometown of Denver, he started training martial arts at American Top Team Altitude under MMA and pro-wrestling veteran Bobby Lashley. Jones trained in Brazilian Jiu-Jitsu from the beginning, but he went through a few instructors before landing under the tutelage of Mario “Busy” Correa, a third-degree black belt under Carlos Gracie Jr., when Busy became the jiu-jitsu coach at Factory X Muay Thai.

Jones has spent the last six years building up his combined amateur and professional MMA record to an impressive 14-5. He’s currently preparing for his next fight, which comes in the form of a headlining spot at Fury FC 37 on Saturday night in Denver. However, one of the biggest accomplishments of his athletic career came two weeks ago, when he was promoted to brown belt by Busy.

“It gave me a lot of confidence on the ground going into this fight,” Jones told Combat Press. “I’ve put a lot of hours in — not just rolling, but I started teaching the past two years. That’s what really elevated my game on the ground, and that’s where I think my professor thought it was a good time to move me to brown. I really felt I earned that belt. I teach six days a week, and I train six days a week. I have a big love for jiu-jitsu, and it takes my mind off the MMA training.”

The promotion to the next belt rank is a great accomplishment in any martial art, but the best accomplishment in an MMA cage involves a raised hand. While the beginning of Jones’ pro career left a lot to be desired, he has been able to hold his hand up high five times in his last five fights. The last outing turned into a fire drill rather quickly, as he and his opponent were elevated from co-main event status to the main event with no prior notice.

“A lot of crazy things happened,” Jones explained. “It was supposed to be Dustin Jacoby, but his opponent randomly fell down the stairs and, like, broke his arm and couldn’t fight. I was warming up, and they were literally like, ‘Hey, you’re up in two minutes.’ So, I jumped right in the cage and started fighting right away.”

The fight Jones is referencing came under the Midwest Championship Fighting banner in March. “Osmosis” had been paired with Isaac Doolittle.

“The first round, he was trying to put a lot of pressure on me, and he took me down,” recalled Jones. “I knew he was going to do that going into the fight. He was going to be heavy and just try to hold onto me. He tried to do that in the second round, but that’s when I started to wake up and got to attacking. So, I learned to be a little more aggressive [and] more offensive.”

Chris Lopez is the matchmaker for Fury FC, a promotion owned by his brother-in-law. Lopez is also an MMA fighter who has spent a lot of time training at various gyms in Colorado. Fury FC 37 will be the organization’s first show in Denver, so Lopez was able to tap some former training partners for spots on the show. Jones, who was one of those past partners, ended up in the main event against Nikolay Veretennikov, who is 6-3 as a pro. Jones is not so much worried about what his opponent is going to do as he is about doing what he does best.

“Not to toot my own horn, but I feel like I’m getting really good at everything,” said the former football player. “One thing I’m getting really good at is just blending everything together. If I want to do some Muay Thai on someone, I’m going to hide it with a jab or with my takedowns to get into that clinch — a lot of feints to get inside or more control when I take people down. I try to get into not just hitting one technique, but blending it in with other stuff. That’s what I’m learning: the element of surprise.”

Jones owes much of his success to his team, including head coach Marc Montoya and the aforementioned Busy. However, he also owes a lot to his teammates, who push him to be the best he can be.

“To be honest, it’s the guys I’m training with: Ian Heinisch, Court McGee, Anthony Smith, Maurice Greene,” admitted Jones. “One thing I also got to do is go out to Anaheim to see the Daniel Cormier/Stipe [Miocic] fight. Ian and Devonte Smith also fought on that card. We were still training out there. So, we had guys to work with, like James Krause, and just being around all those guys and seeing what’s possible, it shows you how you can really come a long way as a fighter. It was nice to get all those affirmations and training with those guys.”

On Saturday night, at the National Western Complex in Denver, Jones plans to finally let loose and showcase some skills that he has been sort of gun-shy about using.

“I’m always trying to be a better fighter than I was last time,” Jones said. “If you go back and watch all of my fights, none of them look the same. I’m always trying something new. I’m not afraid to take chances. Early in my career, I lost three fights in a row, won one, and then lost another one. So, I was 3-4 at one point. I’ve really just taken my career and turned the tables on it. I’m on a five-fight win streak — soon to be six. I just think I can only go up from here.

“I’m just going to impress myself. I don’t know the outcome. I’m not the type to make promises to myself when I fight. I just go in there and see what happens, you know? I’m just going to go in there and be free for once. I think in my past four fights, I was so focused on building my record back up, [and] I wasn’t taking as many chances as I used to. For this fight, I will take more chances and be more deliberate. I just believe in myself that much more. I’ll give my energy to the universe and see what happens.”