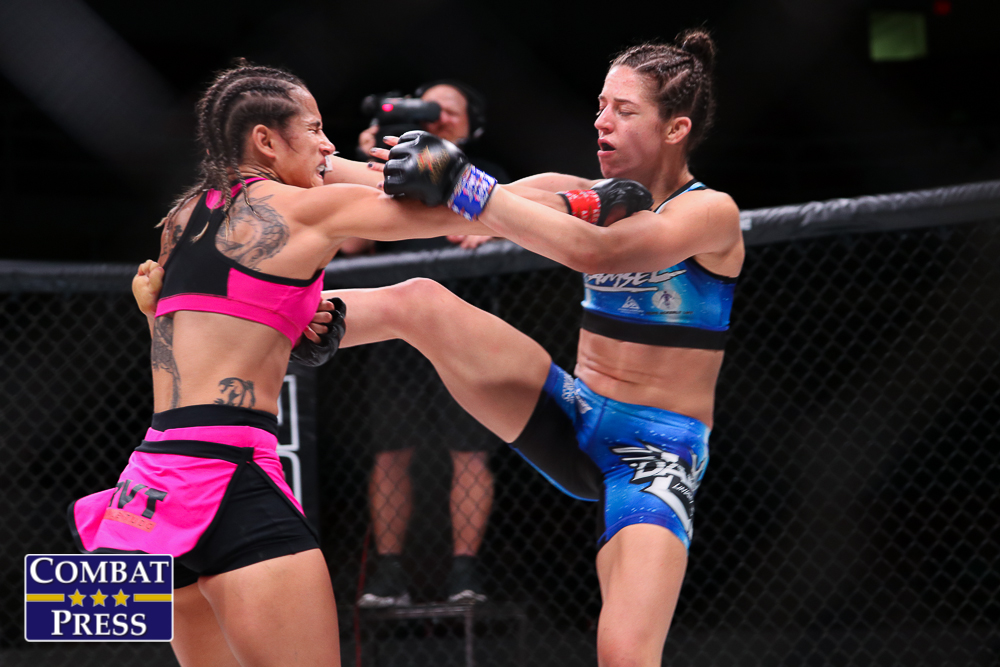 Jéssica Delboni is one of the best atomweights in the world. The fact that the UFC does not have an atomweight division is somewhat troublesome for Delboni, but she could move up to strawweight like others who have made their way to the UFC.

Delboni will definitely be undersized at 115 pounds, being just 5-foot-one, but that doesn’t change the fact that she’s got a lot of fight in her. She is a good striker, but has greatly improved her grappling in recent times. In fact, she spent the second half of 2021 taking grappling bouts, as well as a kickboxing bout. The first half of the year, though, she started by falling short in an Invicta FC atomweight championship fight vs. Alesha Zappitella. Most fans thought Delboni won that fight. She followed that up by winning the Phoenix Rising Tournament for Invicta, besting Tabatha Watkins, Marisa Messer-Belenchia and Lindsey vanZandt to earn herself another crack at Zappitella this month.

I thought the UFC should consider swiping her up before she got that atomweight title rematch booked. She’s a well-rounded fighter with an excellent resume that could add more depth to an already strong strawweight division.

Outside of Marvin Vettori, Italy has not produced a ton of MMA stars that have been highly successful at the top level of the sport. Strawweight Micol di Segni is definitely an Italian with star power based on her outside-the-cage personality and her fighting skills, as the Jackson-Winklejohn rep is the champion of both AFL and Venator FC.

This is the second year in a row di Segni hits this list and for good reason. Outside of being marketable, she’s a rounded fighter with good striking and solid grappling. Her lone fight in 2021 saw her score a knockout win over country-woman Adriana Fusini, which earned her the Venator title. In fact, her last three wins have all come by finish.

She had a chance on the Contender Series in 2019 to secure a contract, but came up a tad short. Since then, she’s been working hard, despite the fact it’s been tough for her to get fights. Either way, the UFC would be silly not to roster di Segni.

When it comes to experience and skill, Emily Ducote possesses both of those, and she should be in the UFC right now. The Bellator and Invicta vet has an excellent track record and could easily make a good run in the UFC right away.

Ducote was one of the busier fighters in WMMA for a little bit, but with Invicta events slowing in the last couple years, so has her cage time. Ducote is very well-rounded and has fought for world titles in both Invicta and Bellator, showing she’s battle tested. Ducote took the Invicta strawweight title in 2021 with a nasty, highlight-reel knockout of UFC vet Danielle Taylor. She also owns victories over the likes of UFC vet Juliana Lima and 2021 Contender Series participant Kathryn Paprocki.

Ducote is more than ready for the UFC, and, given that she’s been able to consistently fight in an Invicta cage, she needs to get to the UFC right away. She’s 27 years old and already has a superior amount of quality cage time to most non-UFC fighters. She’s more qualified than any woman on this year’s list.

With the way Dana White was handing out contracts on the Contender Series this year, it’s almost puzzling how a dominant, young Brazilian strawweight like Maria Silva found herself without signing the dotted line. However, she was indeed not chosen. That said, she should definitely be given an opportunity this year.

Silva is well-rounded, as we’ve seen her with some technical striking and some really good grappling. After having to take a year off from COVID, Silva got her chance to fight on the Contender Series, where she dominated Kathryn Paprocki. She also has wins over formerly undefeated prospect Jainne Lais and Gabrielle Hermogenes, who was part of the flyweight edition of this list.

As stated, Silva should have already been brought to the roster from Dana and Co., but one has to believe she’s on their speed dial right now. I think she could be rostered in the first couple months of 2022.

Poland is really a hot bed for MMA talent, but doesn’t get as much attention due to places like Russia and Brazil. One of the top prospects coming out of Poland is strawweight Ewelina Wozniak, an undefeated fighter who looks to be UFC ready right now.

The 28-year-old Pole has really improved since her ammy days, and looks like she’s starting to hit her prime right now. She has big regional show experience having competed for the likes of Oktagon and Brave CF. Four of her wins come by finish, two of which are by knockout and the other two via tapout. Wozniak had a highlight-reel 2021, scoring a 50-second triangle choke over Elizabeth Rodrigues before a flatliner of a knee to the body TKO over Samin Kamal Beik.

With Wozniak, the UFC needs to strike while the iron is hot. She’s clearly approaching her prime rapidly and is getting better and more ferocious every time she steps in the cage. She’s another killer female Polish fighter that could add depth to 115.