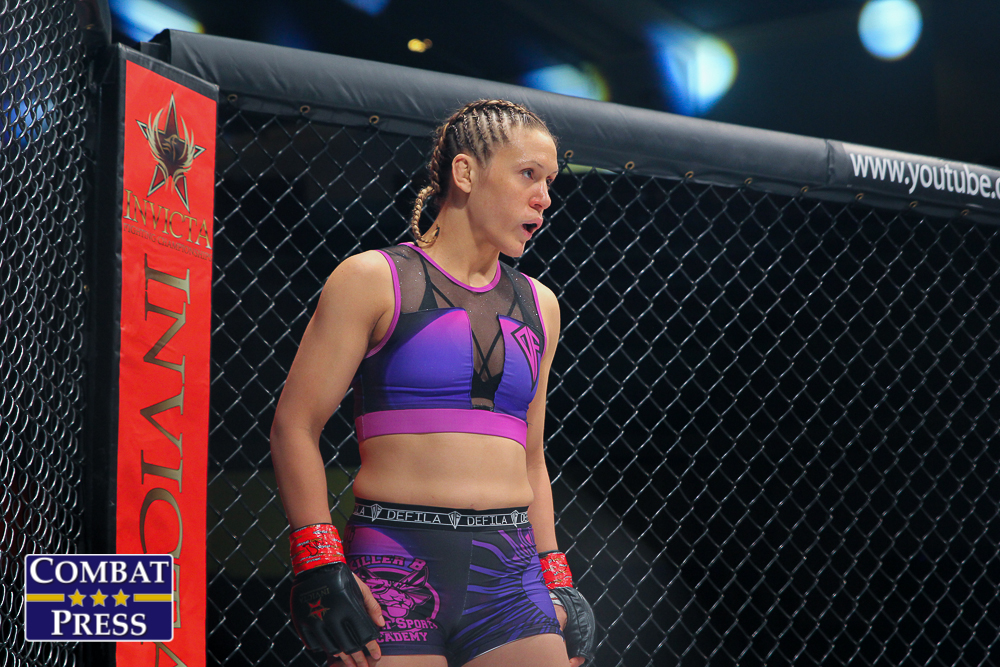 The first time DeAnna Bennett and Karina Rodriguez met, you could say it was a tale of two fights. If you watched the fight through the eyes of judge Rich Montanez, Rodriguez had the upper hand in each of the three rounds. However, if you viewed the fight from the perspective of judges Dan Furse and Rochelle Montanez, then it was Bennett who fared better in each frame. The outcome of the close fight was a split decision for Bennett. Now, at Invicta FC 35, the two ladies will tangle again, this time in the hopes of a more clear-cut outcome.

Bennett followed her narrow win over Rodriguez with a stop in Tuff-N-Uff, where she dropped a decision to Kelly Kobold, and a return to Invicta for a decision nod over Miranda Maverick. Rodriguez, meanwhile, took part in another close fight in the Invicta cage. Unlike her bout with Bennett, the Mexican fighter was the one to have her hand raised in a split decision against Milana Dudieva at Invicta FC 34.

The Invicta FC 35 lineup also features Alesha Zappitella, a rising contender in the atomweight division. The talented wrestler is perfect through five pro bouts, including two fights under the Invicta banner. She’ll attempt to move one step closer to a title when she welcomes UFC veteran Viviane Pereira to the 105-pound ranks in the evening’s co-main event.

The event takes place on Friday, June 7, and airs in its entirety on UFC Fight Pass, beginning at 8 p.m. ET. Combat Press writers Riley Kontek and Bryan Henderson preview the action in this edition of Toe-to-Toe.

The first time DeAnna Bennett fought Karina Rodriguez, she squeaked by with a split decision for the win. Will Bennett turn in a more convincing performance, either on the scorecards or via a finish, in the rematch?

Kontek: Yes, Bennett will have a more convincing performance this time around. However, she will not get a finish.

Bennett’s wrestling and grinding style are a tough stylistic match-up for Rodriguez. They have comparable striking, but Bennett will smother Rodriguez when she gets in close, whether it’s in the clinch or on the mat.

Rodriguez has looked impressive in her recent outings, but the scrappy veteran Bennett will succeed here. She’s too suffocating and will control Rodriguez from bell to bell. It will be settled on the judges’ scorecards again, but this time it will indeed be a more convincing win for Bennett.

Henderson: The 34-year-old Bennett has been about as inconsistent as they come since her failed Invicta title bid against Livia Renata Souza in 2016. Prior to that loss, which marked the first of her career, “Vitamin D” had been perfect through eight fights, including four outings in Invicta. Since the defeat, she has managed an official 2-3-1 mark while also going 1-1 in exhibition action on The Ultimate Fighter 26. She’s kept a lot of those fights close, though, with split-decision losses to Roxanne Modafferi and Jodie Esquibel, the majority draw in her Octagon debut against Melinda Fabian, and the split nod in her first meeting with Rodriguez.

I sense a trend here, and it’s not one where Bennett runs away with the win. Rodriguez managed to limit her time spent on the mat in their first meeting, and the Mexican fighter scored with kicks and combinations on the feet. Oddly, Bennett’s grinding approach garnered all three rounds in her favor on two scorecards, while the third judge awarded every frame to Rodriguez. Based on their styles, Bennett and Rodriguez appear set for another close fight where it all comes down to whether Bennett can tie up Rodriguez or Rodriguez can light up Bennett on the feet.

Bennett, despite her setbacks, has the stronger track record, so she still has to be favored here. However, it’s going to be another razor-thin decision.

Henderson: Invicta found one helluva challenge for Zappitella, who has been able to ace all her tests thus far. “Half Pint” used her relentless wrestling to top Jillian DeCoursey and Amber Brown, and she would have also registered a win over Stephanie Alba if not for a few puffs of ganja. The 24-year-old is championship material, but Invicta isn’t giving her the easy road.

Pereira has fought as high as bantamweight and as low as strawweight, but we’re yet to see if she can make the limit for an atomweight affair. She’s only one inch taller than Zappitella, who stands a ridiculously short 4-foot-11, so it’s probably safe to assume the scale won’t be an issue.

Pereira brings a ton of high-level experience into this fight. She had a four-fight stint with the UFC that included victories over Valérie Létourneau and Jamie Moyle, plus losses to Tatiana Suarez and Xiaonan Yan. She stumbled in her Invicta debut against Mizuki Inoue, but her resume also includes wins over the likes of Rosy Duarte, Poliana Botelho, Liana Pirosin, Vanessa Guimarães and Carolina Karasek.

Despite her status as a seasoned veteran, Pereira is going to struggle to keep Zappitella off of her. The Brazilian has been outworked convincingly by her last three opponents, and a weight change might not be enough to turn the tide. Pereira won’t make for an easy fight for Zappitella, but it’s exactly the type of test that can serve to set up the diminutive fighter as the next in line for the atomweight title.

Kontek: The short answer? No.

Pereira is a stepping stone for a fighter who could be the next Invicta champion. She has the experience edge, but the overall skills and tenacity lean in favor of Zappitella. I always say that a wrestling background in women’s MMA tends to make the fighter among the best. The reason for that is because wrestling is not the most popular sport for female athletes. So, many female fighters do not have great wrestling. Zappitella, on the other hand, has a collegiate and national-level wrestling acumen. That’s what makes her so dangerous. She will take Pereira down throughout the fight and ragdoll her. Zappitella will score a win on the judges’ scorecards and clinch her title shot.

Kontek: There are some very good prospects on this card. The ones I like best are Murata and Goodin.

Murata is a good wrestler and an aggressive fighter whose only loss came against a much larger, more experienced Rin Nakai. She’s an animal on the ground, with heavy top pressure and good submission skills. In her last two bouts, she scored von Flue choke victories, showing she’s creative and knowledgeable on the mat.

Goodin is a very accomplished amateur with an impressive 8-0 record. She appears to have power in her hands and submission skills on the ground. That type of young, well-rounded fighter is the type of fighter you need to keep tabs on.

Wong, Pirosin and Adriane are all serviceable and could end up as mainstays with Invicta. At this point, though, they need to prove more than they have thus far.

Henderson: Murata and Pirosin are set to fight each other, and this match could lead to a new rising contender in Invicta’s strawweight division. Pirosin has put together a solid resume, but she’s lost to the best fighters she has met thus far. Murata figures to be another tough task for the Brazilian, who might even fall victim to her first stoppage loss.

Adriane has the benefit of competing in the somewhat shallow atomweight division. She’s been paired with Loma Lookboonme, a Muay Thai stylist who looked great in her pro — and Invicta — debut against Melissa Wang, but has since gone on to beat the subpar Hana Date and lose to .500 fighter Suwanan Boonsorn. Adriane doesn’t have any truly notable opponents on her own record, but she could take a big step up the ladder with a win here.

Goodin and Wong are the rookies in the lineup. Goodin’s eight-fight amateur run is definitely impressive, but Wong’s 5-1-1 mark isn’t too shabby either. Goodin is likely to emerge as the victor, however. Her knack for finishing fights at the ammy level is also intriguing. Perhaps she can deliver a big finish to get the night’s action started.

The women’s featherweight division can still come across as a barren wasteland at times, but it’s slowly gaining some depth. That’s where Young and McMah come in. The 33-year-old Young had hung up her gloves in late 2014 while on a four-fight skid, but she has returned with a vengeance to decision Japanese star Reina Miura under the Rizin banner and finish Sarah Patterson at Invicta FC 32. McMah has been away from action for a few years as well, but she’s set to return on Friday night in an attempt to spoil Young’s resurgence.

Combine Young’s recent success with McMah’s former status as a top-15 featherweight, and this becomes a very important fight for the division.

Kontek: Young/McMah is definitely a good fight, but my sleeper fight is the pairing of Katharina Lehner and Lisa Spangler.

Lehner is coming off a run on The Ultimate Fighter and is a top bantamweight in Invicta. She’s a skilled fighter who is fun to watch. She hit a bump in the road while on TUF, but she’s hungry and ready to prove she belongs among the top 135-pounders in the world.

Spangler is a strong wrestler and a young fighter who appears destined to be a title contender. She’s one of the best female prospects in the sport, and she could have gold wrapped around her waist in the future.

This may not be an all-out barnburner, but it is an important fight to watch. Either woman could challenge for the belt with a win.

Kontek: PFL and UFC 238. Sit down Thursday night with a pizza and some beers, put on the PFL and watch the exciting league format that is a cool niche in the sport. Then, on Friday, get the wings and beer for the Invicta fights. Finally, on Saturday, get a nice steak and some whiskey, order the UFC pay-per-view, and cap off the weekend with more top-level fight action. It’s gonna be a good weekend.

Henderson: Well, it looks like someone is planning on getting fat and drunk. In all seriousness, though, this is a weekend where MMA should come front and center in your life. The PFL has been delivering entertaining events from its inception, and the UFC’s Saturday offering is a ridiculously stacked lineup. Invicta bridges the gap between those two shows and gives fans a three-day feast of MMA.