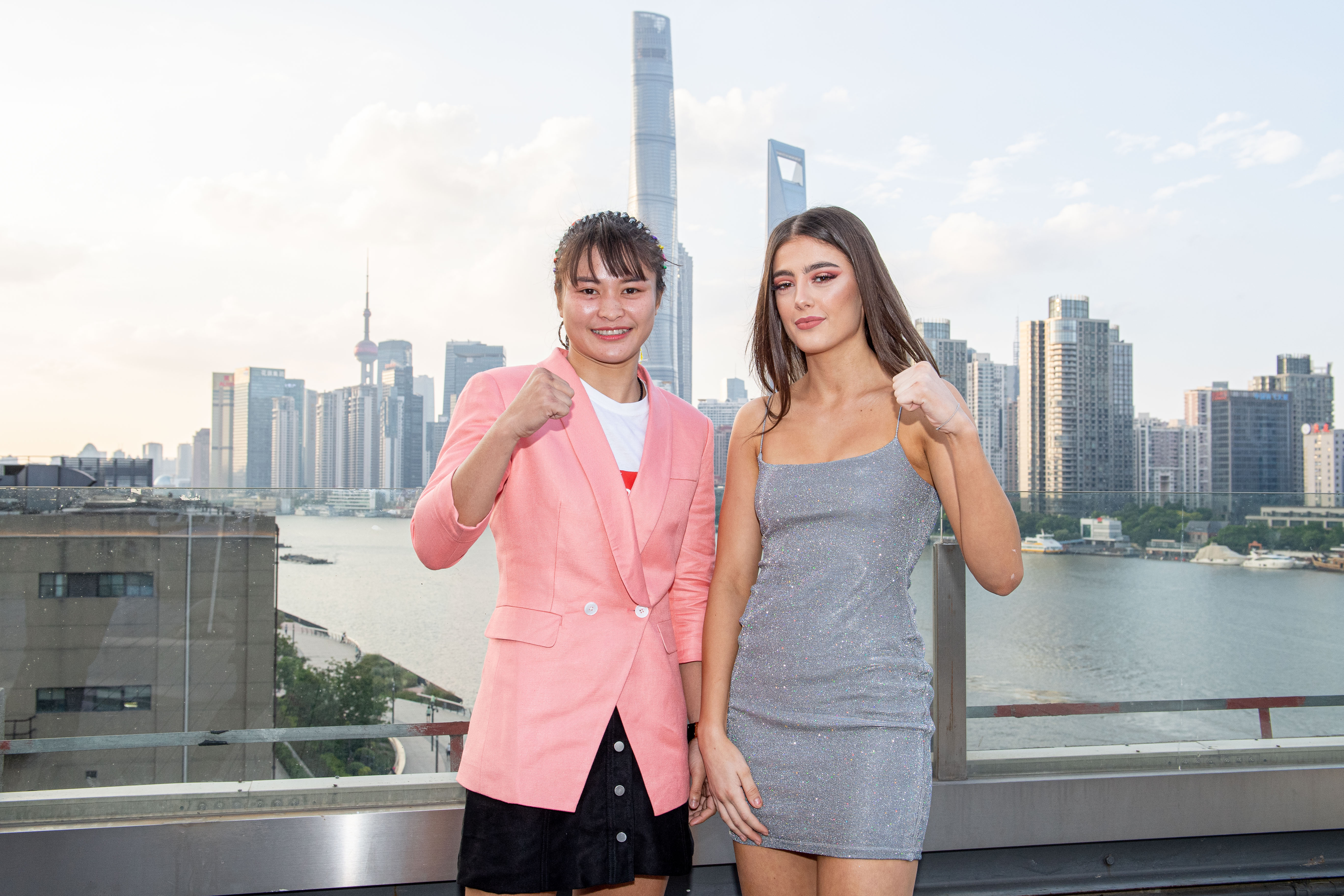 ONE Championship will hold its 97th event on Saturday, June 15, from the Baoshan Arena in Shanghai, China. ONE Championship: Legendary Quest features ONE Super Series women’s atomweight Muay Thai and kickboxing champion Stamp Fairtex in the headliner. She will defend her Muay Thai championship against WBC Muay Thai world champion Alma Juniku, who is making her promotional debut.

Juniku has already put herself on the map as a threat to Stamp’s title. The Modern Warrior Muay Thai representative comes from a family of fighters, which has helped her get to the top of the sport in a short period of time. The WBC Muay Thai champion has put together a 24-4 record with seven wins by way of stoppage. In her first major worldwide exposure as a competitor, the Aussie fighter fell short in the quarterfinals of the Kunlun Fight Legend of Mulan 52-kilogram tournament against future UFC title challenger Weili Zhang at the age of 17.

Stamp has captivated the ONE audience following title-winning performances under both Muay Thai and kickboxing rules. The 21-year-old has shown her personality during her walkouts, her striking prowess with her boxing, and her Muay Thai skills with her clinchwork in her ONE Super Series tenure. The veteran of more than 15 years of combat-sports training will bring a large skill advantage into the contest. Her record features 62 wins, 15 losses and five draws. Stamp made promotional history by becoming a two-sport champion with a unanimous-decision victory against Janet Todd to win the ONE Muay Thai title.

Stamp plans to become the promotion’s first three-sport champ following a successful MMA debut against Rashi Shinde, against whom she scored a brutal head-kick knockout in just 19 seconds. She will be the favorite heading into this contest with a massive advantage in experience and technical application of her sport. Stamp is an aggressive striker with a strong right hand, beautiful work inside the clinch, and a well-balanced attack. She will likely hold an added edge due to the bout being held under Muay Thai rules, which will give her the chance to use her clinch to navigate the distance at which the fight is fought.

Juniku will have to work behind her jab to get her licks in while her competitor is in close range. She will need to put the pressure on Stamp without locking herself into long periods of clinches. Her key to victory is in avoiding damage to the body, working her boxing, and countering Stamp everytime the champ pushes forward with strikes or the clinch. Ultimately, Juniku will be the taller fighter, but she must be smart when finding the range that will work most effectively for her against such a dangerous opponent.

Stamp looks to remain undefeated in her ONE career against an 18-year-old competitor with a strong future ahead of her. It may not be Juniku’s time to shine, but she will likely feature in this division for years to come.

Yoshihiro Akiyama ends his lengthy hiatus of more than three years to return to action against Agilan Thani in the evening’s co-headliner. Will the 43-year-old find any success in his comeback attempt?

The biggest question mark on the card is whether or not the Japanese fighter will be able to compete with the best in ONE’s welterweight division many years past the prime of his career. It’s been nearly a decade since Akiyama was fighting at the top level of the middleweight division. Prior losses to former champions Michael Bisping, Vitor Belfort and Jake Shields put him outside of title contention. However, injuries are what largely derailed his momentum in the middle of his UFC career.

The popular judoka has excelled outside of the cage over the last five years with careers venturing into modeling and song recording. Inside of the cage, however, he has only fought twice in the last seven years. His most recent bout came more than 42 months ago against Alberto Mina at UFC Fight Night 79. The loss pushed Akiyama’s record to 1-5 in his last six outings with his only victory coming against Amir Sadollah in 2014.

“The Alligator” Thani is 20 years younger than his opponent. Despite a disadvantage of nearly a decade in experience, the former title challenger has won 10 fights since the last time Akiyama has had his hand raised in the cage. The 23-year-old prospect, who debuted in 2013, has stopped seven of his eight opponents, but he has also been finished in his last two outings.

If Akiyama gets the victory, the promotion could have another influential player for a return visit to Japan. However, a comeback run for Akiyama will be a difficult, yet not insurmountable, challenge. At his elevated age, the ONE newcomer won’t have the same athleticism that helped him score 12 stoppage victories in 14 pro bouts. Thani has continued to develop a striking game on top of his high-pressure grappling and submission arsenals. Akiyama will hold an advantage in terms of grappling skill, but Thani could neutralize this edge with his size and strength to emerge with the judges’ nod.

The main card of this show is heavy on kickboxing and Muay Thai. Outside of the championship main event, which fighter will make the biggest statement in Shanghai?

Tarik Khbabez is primed to force ONE to add a Super Series kickboxing title in either the light heavyweight or heavyweight divisions when he faces GLORY veteran Anderson “Braddock” Silva, who has compiled a 51-17-1 record in his 14-year career. Khbabez, a top-10 fighter, has impressed in his ONE career with three consecutive victories. He kicked off his promotional winning streak with a knockout of Alain Ngalani. He put on one of his most impressive performances in an exciting back-and-forth thriller against Ibrahim El Bouni. Khbabez pushed his record to 45-4-1 with 28 knockouts following another strong performance against former top-10 kickboxer Andrei Stoica in a three-round war.

The 27-year-old has been on a meteoric rise since returning from a year-long layoff following a hand injury. The former SuperKombat, WKA and WMC titleholder began his martial-arts journey at the age of six, but he didn’t truly dedicate himself to the sport of kickboxing until he turned 16. Khbabez has refined his skills under the tutelage of Maikel Polanen at ARJ Trainingen in the Netherlands. The Morrocan is primed to become one of the prominent figures in the ONE Super Series with a victory over his experienced Brazilian opponent, who has hovered around the top of his division for nearly a decade.

Silva has fought many of the best heavyweights the sport has to offer, so it wouldn’t be a surprise if he is able to derail the momentum of Khbabez. The difference, however, is that Khbabez has the high pace and heavy pressure to batter, damage and potentially finish his more experienced opponent. If Khbabez delivers another thrilling and impressive performance, then the promotion will have no choice but to add a belt to the division.

Matsushima, 26, made an impressive ONE debut with a first-round stoppage of former featherweight titleholder Marat Gafurov, who had only lost once in 17 previous fights. The knockout put the AACC representative on the map as a contender in the stacked division. Matsushima signed with the promotion following a failed title bid against current King of Pancrase Isao Kobayashi in April 2018. Prior to the loss, Matsushima had scored consecutive wins over Kyle Aguon, Yusuke Kasuya and Yojiro Uchimura. The exciting striker will be a welcomed addition to this lineup, which frankly lacks name value on the MMA portion of the fight card.

Kwon, who is also 23, has made a name for himself as an exciting competitor since debuting with ONE at the beginning of 2019. Through three bouts, he has stopped two opponents inside of a combined 90 seconds. In his three contests with the promotion, Kwon has yet to see the two-minute mark. He has posted impressive finishes over Eric Kelly and Anthony Engelen, but he also suffered one unfortunate loss, via heel hook, against submission wizard Masakazu Imanari. “Pretty Boy” has finished six of his seven victories, including five by way of knockout.

The victor of what should be an incredible contest will likely put their name into title contention in a wide-open featherweight division that features plenty of new talent acquired over the last six months.