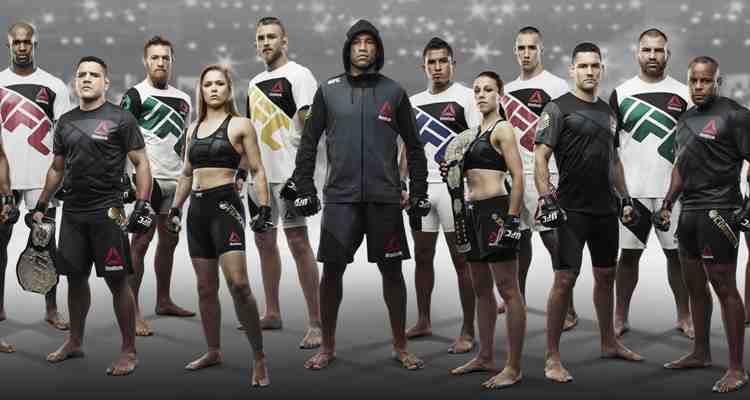 UFC and Reebok: A Deal For the Business, Not the Fighters

It is safe to say that the UFC’s deal with Reebok has been met with a lot of justified criticism for what should be a big step forward for the sport and the promotion. It gives the UFC some legitimacy in a sports world that it has desperately sought to join.

While a deal with a major athletic apparel brand is a good idea, the execution and development of the plan has been nowhere close to what the promotion hypes as being something good for all of its fighters.

The deal with Reebok is supposed to help the fighters and raise their base pay for showing up to fight by supplementing it with a percentage of the sales of their personalized clothing, referred to as a fighter’s “kit.” The fighters have lost their sponsorship money, but they supposedly gained this added bonus.

What isn’t realized is that unless you are as popular as, say, women’s bantamweight champion Ronda Rousey or featherweight title challenger Conor McGregor, just how many people are willing to spend almost $100 on your jersey? Is the average fan going to buy the champion’s jersey or the jersey of a fighter that is barely in the top 15?

We can look to the NFL for a perfect illustration of how jersey sales work. Are NFL fans buying the star quarterback’s jersey, or the punter’s? Everybody knows Green Bay quarterback Aaron Rodgers and is willing to buy his jersey, but just how many are buying a Brandon Fields jersey? That is probably the first time you’ve heard of Fields name despite the Miami Dolphins Pro Bowler being one of the best punters in the NFL. You just don’t see jerseys of the stars at underappreciated positions, let alone those of middling players, even if those players have taken a majority of the snaps at their position in a Super Bowl.

Sure, you have some players who transcend their performance on the gridiron by also displaying a dynamic or outspoken personality outside the game. Tim Tebow is a great example. I’ll admit that I’m one of those fans who owns a Tebow jersey. However, players like Tebow come few and far between. The same can be said for fighters who remain in the mid-tier of the MMA world while gaining massive popularity simply for their persona in and out of the cage.

This might not be a huge problem with the UFC’s Reebok deal if not for the fact that the UFC kits aren’t even really impressive. Each design looks extremely generic for what should be a grand unveiling of the first-ever UFC jerseys, and the lack of a truly unique design won’t do the fighters any favors when it comes to selling their “kits.”

With NFL jerseys, there are 32 different teams with 32 different color schemes, plus variations for home and away jerseys. That isn’t even to mention the retro jerseys or the alternate jerseys the teams decide to wear. Walk into a team shop for any NFL franchise and the options for even just that one team can vary greatly. The UFC, meanwhile, just has a basic color variation based upon the fighter’s country of origin. That gets paired with a generic rendering of the fighter’s name on the side of the back of the jersey and a patch to signify the country the fighter represents.

This is supposed to be a good move for fighter pay, which has long been a topic of discussion for the UFC. All of the costs surrounding being an athlete in MMA put a huge dent in what fighters make after they perform.

In the Reebok deal, champions get the most money at $40,000 per fight plus the bonuses from their own personalized line. Their challengers get $30,000. But, after that, it’s based on how many times a fighter has fought in the Octagon.

That standard for pay hurts a lot of fighters. If you have five or fewer UFC bouts, you’re only making $2,500. Now, the strawweights, outside of champion Joanna Jędrzejczyk and any title challenger, are only getting that small sum of money because the strawweight division has only been around for a very short amount of time and nobody in the division has hit five fights yet. In this system, the champions and top guys are going to continue to get richer while almost everyone else struggles to get by.

To illustrate the difference between the Reebok deal and fighters pursuing their own sponsors, we’ll take Brendan Schaub as an example. Schaub said he made six figures in sponsorship money in each of his last six fights. Let’s take him at his word and add the six-figure minimum of $100,000 to what he made in his last fight at UFC 181 against Travis Browne. Schaub lost the fight and made a reported $32,000. That doesn’t take into account any possible other money he could have made in his contract or backroom bonuses. It’s simply his flat fee to show up. Add in his sponsorship money and he made $132,000 for UFC 181. Schaub also has expenses, such as manager fees and taxes, but we’ll go with the simple numbers here.

Now, with the Reebok deal, Schaub, who has 11 UFC fights under his belt, falls into the third tier. To qualify for this tier, a fighter needs between 11 and 15 total fights in Zuffa-owned organizations like the UFC, Strikeforce or the WEC. According to Reed Kuhn of Fightnomics, Schaub’s tier only accounts for 12 percent of the fighters on the UFC roster. In that tier, Schaub is slated to make only $10,000 per fight. That would tally up to $42,000 for one fight if we figure in his base pay as it stood at UFC 181. That amount is only 32 percent of what Schaub would hypothetically make in a pre-Reebok-deal UFC.

Schaub’s tier is the middle of the pack in terms of the experience-based pay scale. Only nine percent of fighters in the UFC are above his tier. The majority of the fighters land in the first tier, with between one and five fights. So, 61 percent of the UFC roster is making the minimum of $2,500.

Moving on from the monetary aspects of the deal, you have the obvious and most easily done piece of the jersey deal, the fighter names. Some fighters had their name misspelled or had their first name in quotes as their nickname and vice versa. It is something so easily avoided, and yet it adds to the Reebok deal’s shortcomings. The fighters rely on branding to become more popular to the masses. Reebok’s knowledge of their correct names seems like something important. They can’t just combine two fighters like Marcio Alexandre and “Marcio” Lyoto Machida. Also, the obvious “Giblert” Melendez typo that has been making the rounds on the Internet isn’t going to help the brand either.

Ultimately, the typos and incorrect names show a huge lack of attention to the final product. It’s as if Reebok just had looked it over once and said, “Yeah, this is all good,” without actually confirming the actual fighter names or consulting the fighters personally on how they wanted their names to appear on the “kits” that account for a portion of their income. Reebok simply can’t screw up something as simple as names. It is a big sports apparel company and this should have been something so simple for the people on the project to carry out.

The Reebok deal falls far short of being in the fighters’ best interest. Whether it be taking away (far more) money that fighters would get from sponsors than they will from Reebok, or incorrectly spelling the fighter names, the deal just doesn’t add up to one that is friendly to the people it is supposed to benefit the most. The Reebok deal is only good for the UFC business. It helps build the company’s brand, not the brands of its fighters.