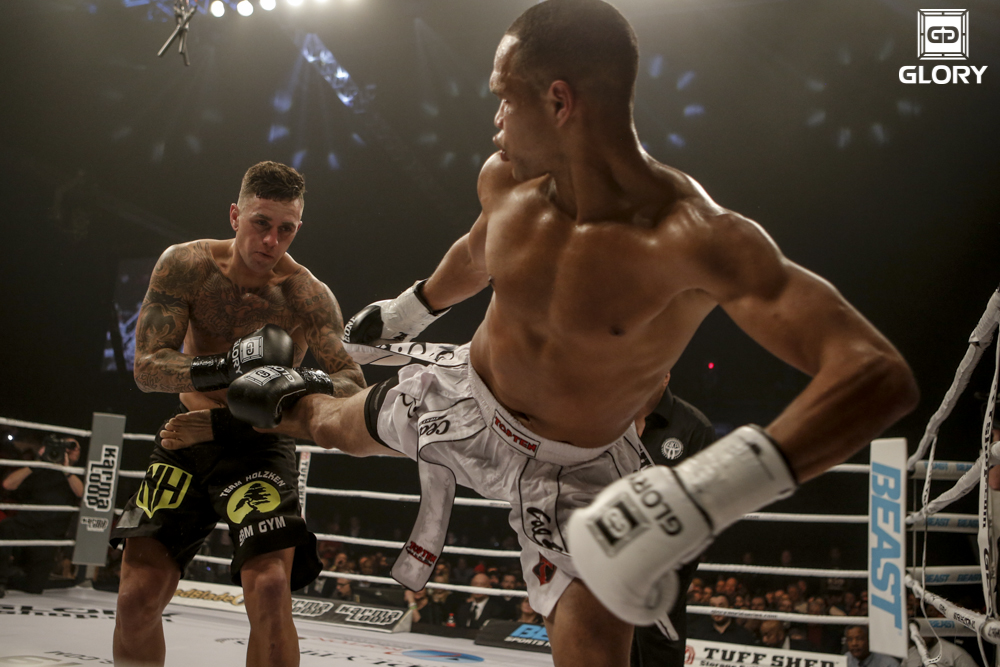 On Friday, Aug. 7, GLORY heads to Las Vegas for its 23rd event, which will take place from the Hard Rock Hotel and Casino.

In the night’s main event, the promotion’s vacant welterweight title is on the line when Dutchman Nieky Holzken rematches American Raymond Daniels. The pair met in February in the finals of the GLORY 19 contender tournament. That night, Holzken crushed Daniels with his patented right hook in the third round. Now, with former champion Joseph Valtellini vacating the title, Holzken will look to repeat his performance from earlier in the year. Daniels, meanwhile, bounced back in May with a 51-second knockout of Justin Baesman at GLORY 21.

Also on the main card, there will be a four-man, All-American middleweight tournament that will reward the winner with a future contender tournament slot. In one half of the bracket, GLORY veteran Casey Greene welcomes Quinton O’Brien to the promotion. Former Road to Glory winner Dustin Jacoby clashes with Ariel Sepulveda in the other half of the ladder.

This tournament may not possess the star power of the past GLORY offerings, but that doesn’t mean it won’t feature some competitive match-ups.

Casey Greene will make his third appearance in the GLORY ring. He’s split his first two outings, scoring a knockout of John King at GLORY 12 and falling short in his late-notice bout against Mike Lemaire in May. Greene has a solid chin, as his bout with Lemaire proved, but he lacks the ability to get off first, which could hurt his chances in his clash with O’Brien.

This will mark O’Brien’s promotional debut, but the 33-year-old has plenty of Muay Thai experience. Although he’s had just two professional bouts, he’s a former WKA world champion in kickboxing and Muay Thai. He holds a win over fellow tournament competitor Ariel Sepulveda.

Greene’s experience in the GLORY ring may be a factor in this fight, but if O’Brien can find a rhythm early, his technical prowess should be the difference. Greene has a ton of heart, but he’ll be at a speed disadvantage in this match-up. Look for O’Brien to walk away with a decision win.

The most misleading thing about this tournament is Dustin Jacoby’s kickboxing record. At 4-6, it’s easy to write off the UFC and Bellator MMA veteran, especially when you look at his 1-6 record in the GLORY ring. However, when you look at his level of competition, it’s a much different story.

Jacoby has faced a gauntlet for someone that’s only been competing in kickboxing for two years. After winning the Road to Glory tournament on short notice, he’s faced the likes of Michael Duut, Danyo Ilunga, Alex Pereira and Mourad Bouzidi. Take a peek at the GLORY rankings and you’ll find all of those fighters in the top 10. He also holds two wins over fifth-ranked light heavyweight Brian Collette. Nothing like being thrown to the wolves, right?

Like Jacoby, Sepulveda is a veteran of Bellator MMA, but he has largely found mixed results in the cage. In the ring, the 31-year-old has found success in four of his five professional outings, but does have a setback to the aforementioned O’Brien on his resume.

Jacoby is going to have the height and reach advantage, in addition to training with the high-profile camp at Factory X Muay Thai. Sepulveda may have the strength advantage, but with GLORY’s limited clinching rules, it’s unlikely to help him in this contest. Jacoby may still be a bit raw, but the former football player is the more athletic and talented fighter. He’ll punch his ticket to the tournament final with a second-round knockout.

The featured bout of the night pits Xavier Vigney, fresh off his GLORY 21 tournament win, against England’s Daniel Sam.

Vigney has taken the promotion by storm. Much like Jacoby, Vigney found his way to the GLORY ring through a Road to Glory tournament win. Another former football player, the 6-foot-8 fighter’s lone loss as a professional came against the vastly more experienced Zabit Samedov. He holds wins over Seth Petruzelli, Everett Sims and Chi-Lewis Parry. His upset of Parry was indicative of Vigney’s strengths, as he was able to weather an early storm and then put his length and power to use.

Sam is a mountain of a man. At 6-foot-5 and 275 pounds, the Brit is no easy out in the kickboxing ring. However, he’s struggled under the GLORY banner, where his lone win came against Singh Jaideep in 2013. The 33-year-old picked up his first win in over a year in June for SUPERKOMBAT.

The story of this card is athleticism, and it’s no different in this match-up. Sam, for his size, is a solid athlete, but Vigney is on a different level in this regard. The experience advantage certainly tips toward Sam, but he’s fallen against more athletic fighters like Benjamin Adegbuyi and Anderson Silva in the past. Vigney can be hit, but he’ll continue his run up the heavyweight ranks with a third-round stoppage of the veteran.

It’s been said that this tournament is Jacoby’s to lose. To be perfectly honest, it’s true. Whether it’s O’Brien or Greene that emerges from the first fight, they’re likely to hold a technical edge over the 27-year-old, but that doesn’t mean that either can play spoiler in the finals.

O’Brien, on paper, is a more natural striker, but you can’t trade amateur titles for experience in the GLORY ring. Jacoby has shown improvement in every outing and has looked unfazed by facing a who’s who of the promotional ranks. This will be Jacoby’s night. He’ll claim the tournament with a late finish of O’Brien.

The first time this fight took place, the prediction was a lot like Babe Ruth calling his shot before hitting a home run. Okay, maybe I won’t toot my own horn that much, but things went exactly as I expected, including the round and method. Six months later, I’m going back to the well once more.

Daniels has proven time and again how exciting he can be in the GLORY ring. Three of his four wins have come via some form of spinning kick, including his GLORY 21 destruction of Justin Baesman. As stated previously, Daniels has the experience and technical skill as a karateka to frustrate any opponent. He’s hard to read and his spinning attacks force even veteran kickboxers to be wary of his offensive firepower. However, he’s no Nieky Holzken.

Holzken’s win over Daniels earned him his second one-night GLORY tournament title. He defeated the man whose belt he’s fighting for, Joseph Valtellini, in the GLORY 13 final, but injuries derailed his path to the belt. Now healthy, Holzken is in the conversation for the best pound-for-pound kickboxer on the planet, and he’ll look to validate that claim by putting gold around his waist.

It’s hard to envision this fight going any differently than the first meeting. Sure, both men will be fresher since they don’t have to defeat another opponent first, but that doesn’t change the gap in technical kickboxing skills. Daniels will score early, like he did in the first meeting, and keep Holzken off his game for a brief moment. But once again, Holzken will find his range and exploit the openings in the defense of Daniels. It’ll end in round three with a Holzken right hook, just like in February. Rinse, repeat. Holzken will finally have the title he deserves.

A truthful assessment might say that there’s more depth on the Superfight Series than the main card.

Heavyweights Anderson “Braddock” Silva and Jamal Ben Saddik will aim to climb into contention for Rico Verhoeven’s title at the other’s expense in the top-billed fight. Dutchman Murthel Groenhart will look to move closer to a shot at his countryman Holzken when he takes on fast-rising Brit Chad Sugden. Finally, Georgia’s Giga Chikadze looks to follow up on his impressive promotional debut when he locks horns with Uzbekistan native Anvar Boynazarov.