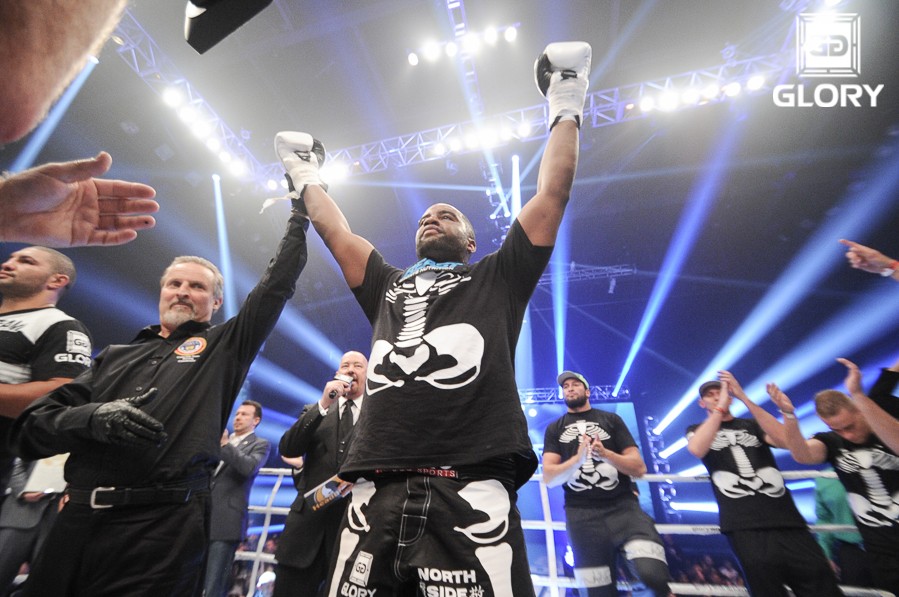 The first GLORY event of 2015 will take place from the Hampton Coliseum in Hampton, Va., on Friday, Feb. 6.

The event will be headlined by a heavyweight title tilt between current champion Rico Verhoeven and power-punching veteran Errol Zimmerman. The bout will be the third meeting between the two. “The Bonecrusher” knocked out Verhoeven in under a minute in 2012 under the It’s Showtime banner, and Verhoeven exacted revenge at GLORY 9 in 2013 via decision.

Verhoeven will be making the first defense of his GLORY belt. He captured the title in June with a decision win over Daniel Ghita. The victory over Ghita moved the 25-year-old’s record in the GLORY ring to an impressive 7-1, including wins over Peter Aerts and Gokhan Saki.

Zimmerman, meanwhile, will look to put gold around his waist after winning the GLORY 16 contender’s tournament in Denver last May. On that night, the Curaçaoan fighter scored back-to-back first-round stoppages over Ben Edwards and Anderson “Braddock” Silva. The 28-year-old has won three of his last four outings.

The first half of the welterweight tournament ladder should be a joy for fans of aggressive strikers.

Daniels is one of the most decorated karate and taekwondo practitioners in the United States. He has held nearly every title in karate and made a name for himself as part of Chuck Norris’s World Combat League, where he went undefeated. He made himself known to GLORY fans last May when he demolished Francois Ambang with a spinning heel kick.

Oliveira may not have the notoriety of Daniels, but the Brazilian possesses a strong offensive game. He has a propensity for coming forward and landing with punches and knees.

The experience of Daniels as a karateka will be a big factor in this fight. His kicks and counterstriking ability will be too much for Oliveira, as Daniels advances with a unanimous decision win.

Joseph Valtellini may hold the GLORY belt, but many that follow the sport consider Dutchman Nieky Holzken the best welterweight kickboxer on the planet. Now, he’ll get a night to showcase it when he meets Alexander Stetsurenko.

Holzken battled injuries in 2014, which may be the only reason he doesn’t possess GLORY gold. The Dutchman has yet to taste defeat in the promotion’s ring and claimed the one-night welterweight tournament at GLORY 13 with a third-round TKO of Valtellini. The 31-year-old returned to action in December and needed just 55 seconds to earn another win.

Stetsurenko comes in as a late replacement for Murthel Groenhart, who was a late replacement himself for Artur Kyshenko. The Russian has faced many of the sport’s best, including a storied trilogy with GLORY middleweight champion Artem Levin. Stetsurenko’s 2014 was a bit rough, as he was stopped for the first time in his career by UFC veteran Paul Daley.

No disrespect to Stetsurenko, but this is Holken’s fight to lose. He’ll give up some size to the Russian, but he’s faster and far more technical. Look for Holzken to the cruise to a decision win.

Despite a decade age difference, middleweights Joe Schilling and Robert Thomas do share something in common. They both are eager to get back into the ring with GLORY middleweight champion Artem Levin.

Thomas made his GLORY debut last May against none other than the Russian. At just 20 years of age, Thomas found himself on the wrong end of a decision. The Canadian bounced back in November with a third-round knockout of Mike Lemaire. He looked far more relaxed and used his Muay Thai skills to batter Lemaire.

Schilling shocked the kickboxing world in 2013 with his win over Levin at GLORY 10. However, when the pair met again in the finals of Last Man Standing in June, Schilling could not repeat the performance. He did bounce back emphatically inside the Bellator cage later in the year when he demolished fellow GLORY veteran Melvin Manhoef.

This fight is a contrast of styles. Thomas is a much more technical fighter, whereas Schilling is not afraid to brawl and use his chin to overcome the holes in his defense. At times, Schilling’s approach has failed him, but far more often he overwhelms opponents with pressure and punching power. Look for Schilling to floor Thomas with multiple right hands, earning a second-round TKO.

As stated earlier, Daniels has the experience and technical skill to frustrate even the most veteran kickboxer. However, his unorthodox style only confuses opponents for so long. Unless he can catch Holzken off guard early and hurt him badly, it’s just a matter of time before Daniels finds himself getting picked apart.

The lone loss on the record of Daniels came at GLORY 13 at the hands (and feet) of current champion Joseph Valtellini. Daniels scored early, but Valtellini settled in and took over. Couple that with the fact the Holzken stopped Valtellini that same night, and it’s not hard to envision how this fight ends.

Holzken is likely to use his jab to pepper Daniels at range and avoid the flashy kicks. Late in round three, Holzken will deliver a fight-finishing hook that wraps up the tournament and locks up a title shot against Valtellini later this year.

The run of GLORY heavyweight champion Rico Verhoeven inside the GLORY ring is something to behold. The 25-year-old’s lone loss came at the hands of countryman and legend Semmy Schilt. Since then, he’s defeated the likes of Peter Aerts, Gokhan Saki and Daniel Ghita (twice). He’s also defeated the man that will stand opposite him on Friday night, Errol Zimmerman.

The Curaçaoan Zimmerman may not have had the same kind of consistent success as Verhoeven in the GLORY ring, falling to Schilt and Ghita, but he’s won three of his last four. He needed just over five minutes to demolish Ben Edwards and Anderson “Braddock” Silva at GLORY 16 in May to earn his title shot. That night, he quickly reminded fans that when “The Bonecrusher” is on his game, he’s one of the most devastating fighters in the world. It’s the same sort of explosiveness that saw him knock out Verhoeven with a vicious left uppercut in the pair’s first meeting.

Two years ago, predicting the outcome of this fight would’ve been a no-brainer. Verhoeven is the far more technical fighter and tends to use a workmanlike approach to cruise to decision wins. Zimmerman, meanwhile, is extremely unpredictable. One night he’s a one-man wrecking crew and the next he’s simply there to collect a paycheck. With GLORY gold on the line, let’s hope it’s the former that shows up in Virginia.

Zimmerman’s record is littered with two things: quick knockouts and decision losses. He proved once before that he can stop Verhoeven. With Verhoeven coming off a stunning decision loss just a month ago in China, now is the time for Zimmerman to take advantage. It won’t be the uppercut this time around, but Zimmerman will claim the GLORY heavyweight belt with a first-round knockout via right hook.

The night’s undercard, dubbed the “Superfight Series,” could easily serve as a main card for most kickboxing promotions.

It’s almost hard to imagine that Andy Ristie won’t be on the night’s Spike broadcast. The 32-year-old can claim knockout wins over Giorgio Petrosyan and Robin van Roosmalen — both in the same night — and may be next to challenge for gold if he can get around Australia’s Steve Moxon. Moxon’s biggest problem in this fight will be Ristie’s length. The Dutch-Surinamese fighter will have a height and reach advantage over the Aussie.

Another exciting fighter on the preliminary card is Canadian lightweight Josh Jauncey. He’ll take on German Golden Glory product Max Baumert. Jauncey has trained with legend Andy Souwer, a man that stopped Baumert by TKO in October, for a large portion of his career.