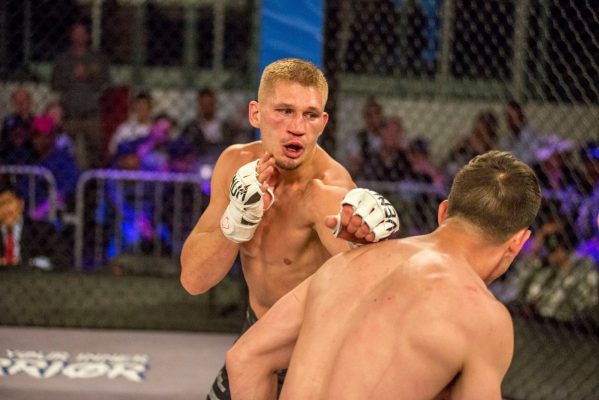 LFA 56’s Austin Hubbard: ‘I Got the Transfer’

Here’s a note to those fighters out there who are looking for a job, but need the flexibility to move around the country for training: Walmart is hiring.

Five years ago, Austin Hubbard was just getting into MMA. Originally from Sterling, Ill., he started training at Combat Zone MMA in his hometown, before moving over to the famed Miletich Fighting Systems in Bettendorf, Iowa, which was only an hour away. However, two years later, the Miletich gym closed its doors.

Hubbard needed to find a new camp. He also had to hold down a job, because fighting, especially as an amateur, literally pays nothing. He was working in a Walmart Distribution Center. While the job was very physically demanding, it was an easy way to make money and stay in shape at the same time. However, aspiring to make it to the big show one day, he needed to find a gym as well. That search landed him in Denver with the Elevation Fight Team, home to many current, former and future UFC fighters. He wanted to move, but his job and family were in Illinois.

“I got home on a Sunday and went to work on a Monday,” Hubbard told Combat Press. “I thought, ‘What’s it going to hurt? I might as well put in for this transfer. It’s probably highly unlikely that I’ll get this transfer.’ [Walmart] literally called me the next day and said I got the transfer, and they wanted me to move. They said they needed to know by tomorrow. I had to make living arrangements at one of Neil Magny’s rental houses. Luckily, he got me a place to stay and everything. The rest is history.”

The move took place three years ago, just a week after he got approved for the transfer. He was living in the Lakewood suburb of Denver, but he would make the hour-long drive up to Loveland for work. After five years of stacking boxes all day and trying to train when he wasn’t working, Hubbard, by then 5-1 as a pro, decided it was just too much.

“It got to the point I was comfortable with training and everything, and I was ready to make the leap and committing myself fully to fighting,” Hubbard said. “I quit that job a little over a year and a half ago. I’ve been fully committed to training and fighting, and it’s going great.”

Since quitting his job, Hubbard has gone 4-1, bringing his pro record to 9-2. His last fight was, by far, his toughest challenge of his young career. He faced fellow up-and-comer Harvey Park in his Legacy Fighting Alliance debut at LFA 39 in the ski town of Vail, Colo. Park was coming in at 9-1 and had finished almost all of his opponents.

“The last fight was an interesting one,” Hubbard said. “I really showed that I could dig deep. I faced some adversity in that first round. I got clipped with a punch I didn’t see coming, and it definitely rattled me. I went back and watched the film. I think it was about midway through the first round when I got caught. I literally didn’t remember any of the rest of the first round. I took kind of a beating that first round, but I came back, stuck with it, and I won the second and third rounds. It definitely opened my eyes.”

The win over Park was big for Hubbard. It launched him into the top-ranked unsigned lightweight position in Colorado. However, his adversity had actually began prior to the fight. He hasn’t been in the cage since.

“I broke my nose two weeks before that fight, and it was pretty messed up,” Hubbard admitted. “I had to have surgery after the fight to get it fixed, and that put me out for three months. I couldn’t have any contact or anything like that. I had another injury after that, and that put me out for another month and a half. So, for almost four or four and a half months, I wasn’t training at all. It was a big bummer for me, and kind of put me in a dark spot.

“I got better, and I’ve been training hard for a couple months now, and I’ve been trying to get fights. For some reason, every promotion I’ve been talking to couldn’t find me an opponent. Eventually, on a Monday, I went to wrestling practice, and my coach said I got a fight. I was hoping it was for LFA — they seem to be the path to take to get to the UFC — and he said it was for the LFA and for the title also. I thought they were lying to me at first. I was stoked.”

On Friday night, Hubbard finally returns to action for the first time since May. He meets Killys Mota in the main event of LFA 56 in Prior Lake, Minn. Mota, a Teixeira MMA and Fitness prospect out of Brazil, has yet to be beaten, and, like Park, has finished almost all of his opponents.

“I know he’s 11-0 with nine finishes, so he’s obviously a tough fighter,” said Hubbard. “It’s hard to go undefeated. I know he comes out really hard the first and second round, but I’ve seen him fade a little bit. He’s a tough-ass fighter, so he comes at you. I know it’s going to be a battle. That’s for sure.

“I feel like my cardio just drowns [my opponent]. I’m always in great shape. I feel like I’m a pretty good wrestler, so I can get takedowns, and I’m hard to take down. I feel like my striking is also on point, for the most part. I feel like I’m a complete-package type of fighter. The real game plan for me is to be smart in the first round, weather the storm, and attack where I can attack.”

Most people know that an LFA title is a damn-near guarantee to an eventual UFC contract. Sometimes, it’s through Dana White’s Tuesday Night Contender Series. Other times, it’s a short-notice call-up. It can even just be a good, old-fashioned contract. Whatever the case may be, the 26-year-old Hubbard has the opportunity of a lifetime in front of him. Oddly, it can all be traced back to Walmart. He’ll even revisit his old stomping grounds in Illinois for some family time after the fight.

“I have nephews now that are all back there,” Hubbard said. “So, I look forward to getting back as much as I can to visit them. I’m real close with my family. They’re a huge supporter of what I’m doing. I always look forward to going home and seeing them between fights. After this fight, I’ll probably spend most of my time in Illinois. The plan is to be in Illinois for the rest of December. My birthday is Dec. 22, then Christmas, and my sister’s birthday is the 31st.”

Hubbard has a younger brother and an older sister back in Illinois, too. Of course, there are also his parents, who are two of his biggest supporters. However, he has business to attend to first. In a fight that will air live on AXS TV from the Mystic Lake Casino Hotel, Hubbard will take one step closer to achieving his ultimate goal of fighting in the UFC.

Hubbard would like to thank all of his coaches and training partners at the Elevation Fight Team, and his recovery team: Fix Performance Medicine, The Muscle Project, and Caldwell Chiropractic. He would also like to thank his family, friends, fans and sponsors: Hubbard and Sons Construction, Caring Hearts Home Health Care, Jeff’s Auto Repairs, K&G Landscaping, Smeltzer Insurance and Apex Dental. Follow Austin on Twitter: @AustinHubb55
Advertisement