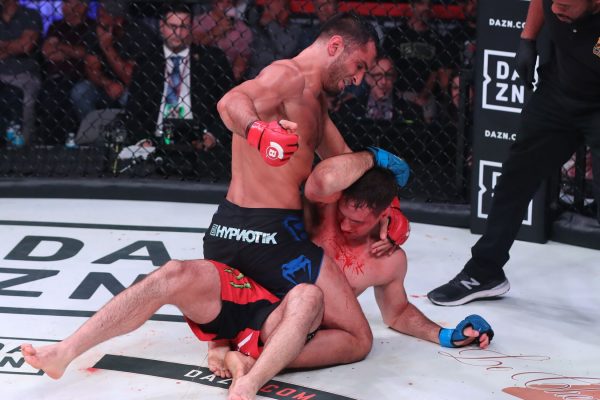 Bellator 206 Headliner: Not a Mismatch in Weight, But in Skill

Ever since Georges St-Pierre temporarily walked away from the sport of MMA, the best welterweight in the world could be narrowed down to three people. However you chose to rank them, the list was not complete without Rory MacDonald.

MacDonald had losses here and there, but they came against guys like Robbie Lawler and Stephen Thompson. In terms of an overall set of skills and well-roundedness, you cannot find a better example than MacDonald.

This is the guy that dominated — absolutely dominated — some of the best fighters in the world, including Tyron Woodley, Demian Maia and Nate Diaz. Say what you want about Diaz’s size, but it does not change the fact that he is a world-class fighter who has fought at welterweight multiple times throughout his career. Diaz has had trouble making the lightweight limit before, and he was not a completely undersized fighter against MacDonald. Diaz is extremely lanky and doesn’t carry much muscle, which makes him look a lot smaller than he really is.

MacDonald has been a joy to watch, too. Any future fights that involve “The Red King” are sure to prompt this writer to tune in. It’s hard to root against a guy who cares about nothing but being the best in the world, and every time he gets into the ring, he puts on fireworks.

This brings us to MacDonald’s Bellator 206 fight against Gegard Mousasi. Mousasi is easily one of the most underrated fighters in the history of the sport. Talk about a guy that has been through it all. Mousasi fought at heavyweight against Mark Hunt at one point — and won. When, to everyone’s surprise, Mousasi made the move from UFC to Bellator, it looked like a great opportunity for him to finally get the push and the recognition he has deserved for a very long time.

This was a phenomenal fight, but knowing that one of these men had to lose was a tough pill to swallow. It was a little tough to watch MacDonald walk out of the arena all busted up and clearly disappointed. However, it was also a joy to see Mousasi win.

The victory for Mousasi was even more impressive given MacDonald’s toughness. We’ve seen MacDonald go through some wars in the past — the second Lawler fight was the standout one — and he is known for being able to endure a ridiculous amount of damage. We most recently saw this on display in his title fight against Douglas Lima, where he was able to pull off the win after five rounds of war.

MacDonald started off very well against Mousasi. He landed some good overhand rights and seemed to have the speed advantage very early in the first round. However, Mousasi was never fazed. The middleweight champion started to work behind the jab, which was extremely effective for the remainder of the first round and even in the second, until MacDonald went for that desperation Imanari roll. There’s no other way to put it — this was a panic move. Mousasi was slowly but surely taking over the fight on the feet, and MacDonald clearly felt it as well. As soon as he wound up on the bottom after the roll did not work out, it was all downhill from there. Mousasi’s massive ground-and-pound attack eventually bloodied up MacDonald badly. MacDonald tried to move, but he was too hurt at that point.

The weight disparity surely played some factor. There isn’t a welterweight out there who can do to MacDonald what Mousasi was able to do. Before the fight, MacDonald’s coach, Firas Zahabi, talked about his fighter being better in grappling and with strikes, so the weight difference surely had some impact in the fight. Yet, this is not the primary factor that separated Mousasi and MacDonald on this particular night.

Mousasi is the worst stylistic match-up for someone like MacDonald, especially ever since MacDonald started having a lot of trouble with his nose. Mousasi has one of the best jabs in the business. For someone like MacDonald, who does not rely a lot on movement and whose nose has been a floodgate in most of his recent fights, this is a major problem. The jabs landed over and over, especially in the first round.

If MacDonald could not use his stand-up to take over the fight, then he had to find an alternative. This, of course, meant grappling. However, Mousasi’s ground-and-pound ability is far different than that of anyone else MacDonald has ever faced. Compounding the problem, Mousasi seemingly doesn’t know what it’s like to tire. All of these factors make “The Dreamcatcher” the worst possible opponent for MacDonald.

After the fight, MacDonald posted on his Instagram, stating that, “Unfortunately, I didn’t mentally show up ready to take on a competitive fight and froze in the cage. In this sport you pay a high price if you’re not dialed in and ready to go. I have zero excuses. Gegard was a fantastic champion last night.” [Ed. note: Quote has been edited for grammar and spelling.] The statement pretty much explains why he went for the legs in the second round.

Mousasi was the better fighter that night, not just the heavier man. He did not use his weight to dominate the fight. He never went for takedowns. Instead, he stood in the pocket and went after the welterweight champion. Don’t think that MacDonald is going to let this loss take him down, either. He is extremely durable mentally and has excellent people surrounding him. He will surely be back to participate in the tournament soon. However, the night belonged to Mousasi at Bellator 206. He deserves all the credit in the world for earning the win.