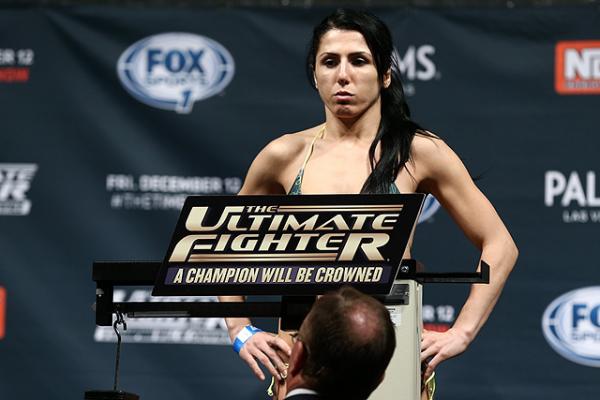 On the 20th season of The Ultimate Fighter, Randa Markos was considered one of the dark horses. After impressive showings where she upended Tecia Torres and Felice Herrig, she fell to eventual finalist and inaugural title challenger Rose Namajunas. Since her first foray into the UFC, Markos has never lived up to the promise she showed in decisively defeating two women who are still in the top 10 in the strawweight division.

Markos is one of the most durable, physical and athletically gifted fighters in the division. Through her 10 fights in the UFC, she has never really been dominated, bullied or beaten up. Markos has routinely been handed tough match-ups with high-profile signings (Karolina Kowalkiewicz), seasoned veterans (Jocelyn Jones-Lybarger, Aisling Daly), high-end athletes (Cortney Casey, Alexa Grasso, Nina Ansaroff) and former champions (Jessica Penne, Carla Esparza). In spite of the quality of her opposition in both talent, Markos’ blend of athleticism, physicality, aggression and durability has allowed her to remain competitive. The majority of her losses have come by decision. Her most recent fight, which took place just days ago at UFC Fight Night 137, ended in a majority draw against Marina Rodriguez.

With these types of foundational tools, how is it that Markos has been unable to generate any sort of consistent success? Why has she failed to put two wins together over her UFC tenure, outside of her time on TUF?

Markos is a willing striker, much like Bellator flyweight Emily Ducote. She will force engagement, press opponents and fire back when pressed. This willingness to pitch and catch allows her freedom. More importantly, it presents a danger to opponents who can’t rely on her becoming defensive or waiting on them to finish before fighting back. This small difference in approach can have a large impact on the tone, direction and result of a fight.

However, Markos, much like the aforementioned Ducote, isn’t a refined or measured striker. Her aggression isn’t disciplined. She often runs into shots, gets out of position and ends up blasted with shots. Once this happens, the 33-year-old’s pressure grinds to a stop, which exposes her inability to counter with individual shots or combinations.

In the worst-case scenario, Markos is forced to move backwards, where her lack of defensive acumen and multi-directional mobility is spotlightlighted. Her ability to be effective at range or to work her way into range is also inconsistent. This is due in large part to her lack of commitment to her jab and her subpar footwork. It’s the same problem we’ve seen in Rashad Evans, Urijah Faber and Cody Garbrandt.

The TUF alum’s success on the feet is largely determined by her athleticism. Markos uses advantages in explosiveness to close distance and overwhelm opponents and push them back. This highlights the lack of defensive footwork, poise and counterpunching in the vast majority of mixed martial artists. When opponents have a willingness to punch with Markos or the poise to stick her and move, Markos leans on her durability to maintain her aggression in the face of adversity. She hangs in there long enough to take away the play or to force an opponent to attempt to clinch or shoot. Her physicality and strength allows her to control opponents and open up on them, push them back and defend takedowns before re-engaging with strikes.

The second reason for Markos’ inconsistent performance is an intangible. We have clearly observed that her durability, athleticism, body control, physicality and strength are on par with what the best in division have to offer. Anyone who has seen Markos fight will recognize that she has the all-around grappling and wrestling skills to hold her own with the majority of fighters in her weight class. This allows her to mitigate her unrefined and obvious approach to striking. She is obviously talented and smart enough to develop an approach that compensates for her technical shortcomings and allows her to take advantage of her physical tools. Yet, she isn’t more successful, because she has a lack of fight IQ and attention to detail.

Markos isn’t stupid. That’s not the implication here. You don’t come up with an approach like hers if you lack brains. Markos didn’t get away from what worked and, as a result, she hasn’t had huge dips in her performances. Her problem, instead, is that she hasn’t added on to what she already has in her toolbox.

Markos has made minor improvements from fight to fight, but there have not been consistent improvements put together in a manner that creates structure. She has a jab that appears and then disappears. She has a punishing ground game, but she lacks variety in her ability to get the fight to the canvas. She leans heavily on her physical abilities to create scrambles instead of working her way out of bad spots. She uses athleticism to close distance instead of working her way in behind a jab or feints. These holes in her game are the reason why she misses, gets picked off and ends up over-extending when striking.

This lack of detail is only worsened when combined with her lack of awareness. Markos can’t see the other side of the coin. She doesn’t expand her skill set or add any sense of nuance to her game. It seems as if, in her mind, she assumes she can win if she can tick off a certain amount of things on her checklist. Her lack of diversification limits her ability to be more consistent in doing these things. It also creates multiple opportunities for her to fall into the same bad spots or repeat the same mistakes that lead to a drop in her workrate, which is a death note for a fighter who relies heavily on aggression and athleticism in place of positioning, patience, strategical awareness and technical application.

Markos is a very talented fighter. Upon her entrance into the UFC following TUF, Markos was a real dark horse in the strawweight division, much like Raquel Pennington. So, why did Pennington work her way up to a title fight without any of the physical talent Markos enjoys? It’s because Pennington doesn’t have the athleticism to overwhelm average fighters and hold her own with the above-average athletes. Instead, Pennington was forced to layer her approach. She had to be detailed in her training and nuanced in her game. Pennington didn’t have a choice. She had to progress and refine.

Markos hasn’t done the same, and it’s because she didn’t have to. Much like Michael Vick didn’t have to learn how to read defenses at the line of scrimmage or go through his progressions, Markos has been able to rely on her physical gifts. Vick didn’t really progress as a quarterback until he had a forced break, realized he wasn’t the athlete he used to be and had to be more disciplined, aware, poised and technical. Markos hasn’t been forced to make these decisions. In spite of her natural talents and savviness in coming up with an approach that plays to her strengths, Markos has been unable to be consistent throughout the duration of her fights.

Again, Markos isn’t a bad fighter. She has been in the UFC for four years and has amassed a career record that sits two wins above the .500 mark. There have been much bigger signings and much more established fighters who have not stayed in the organization for as long or experienced as much success in the same time frame. Markos has notched a few big wins, but she hasn’t been able to do it consistently. This lack of consistency belies her talent and makes fans, promoters and opponents look at her as less than elite.

Markos hasn’t developed or grown. She hasn’t refined herself technically or strategically. For too long, she has leaned on a system and the physical tools that power that system. It hasn’t sent her backwards, but it has severely limited her ability to move forward.