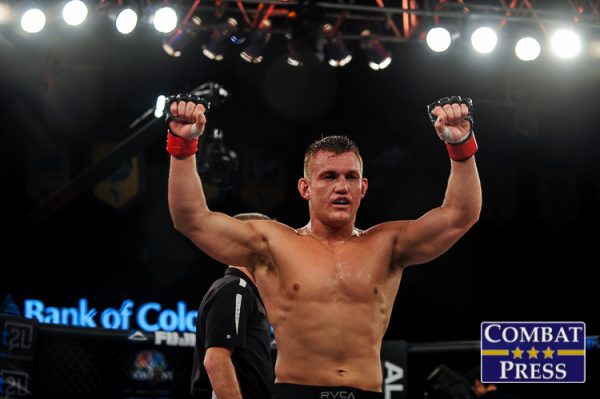 The show continued with its sixth entry last week, and now it returns for its seventh episode on July 31. The UFC Fight Pass stream gets underway at 8 p.m. ET.

This card has a lot of strong prospects, so singling out the best of the bunch is a tough task. Factory X Muay Thai’s Ian Heinisch gets the honor, however. The 10-1 middleweight is not only very skilled in all facets of the game, especially striking, but he has defeated some very tough competition. Heinisch holds wins over the likes of top Brazilian middleweight prospect Gabriel Checco, respected regional veterans Daniel Madrid and Hayward Charles, and a number of other Mountain/West Coast staples. His only loss came to UFC fighter Markus Perez, just three fights ago. However, that one misstep should not discount how good Heinisch is.

If you have ever watched a Griffin or Mitchell fight, you know that they bring it every time they step in the cage. So, when two men who are used to bringing electricity to a fight meet in that environment, you have to believe it will be nothing short of a barnburner. Griffin, especially, has been strong on entertainment value with his finishes, from his unusual armbar submission of Darrick Minner to his devastating head-kick knockout of Ben Pierre-Saint. Don’t blink during this match-up, because it will be fun from the onset.

Gross is 11-7. He hasn’t beaten anybody of note and has lost to some fighters that are of questionable caliber. It doesn’t matter that the lightweight division has so much better to offer, as this would be a questionable addition to the card in any weight class.

There are two undefeated heavyweights competing on this card. Both men have a ton of potential, but neither man has a ton of experience. The fighters in question are Juan Adams and Mitchell Sipe.

Sipe, who takes on Contender Series veteran Dontale Mayes, is only 22 years old, but he has already bested four opponents since 2016. Sipe has a collegiate wrestling background from Bakersfield College, and he uses these skills in his fights.

Adams takes on Ricardo Almeida student Shawn Teed. In his combined amateur and pro careers, Adams has finished every fight, only leaving the first round in two of his ammy bouts. He is an immensely powerful striker, and at just 26 years old, he could be an absolute diamond in the rough.

As noted many times in this series, the UFC is in big need of heavyweights, especially heavyweights of the future. That’s why Adams and Sipe will score contracts.

Heinisch will have an immensely impressive performance that will score him a contract after he wows UFC President Dana White and the boys.