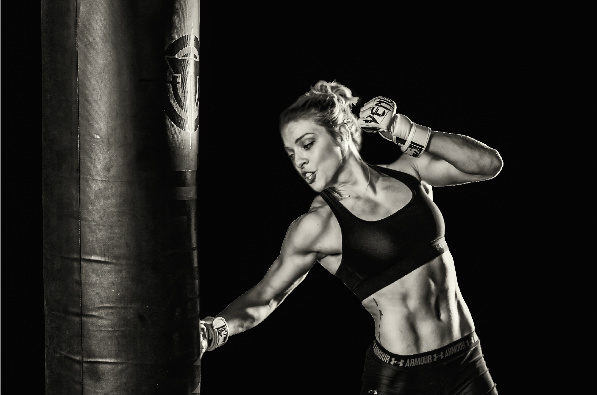 Ever heard of the National Collegiate Acrobatics and Tumbling Association? Probably not. At least, not yet.

Collegiate acrobatics and tumbling is a sport that is still very much in its infancy. It’s only been around since 2011, and there are just 24 schools currently participating. The sport is basically a team version of gymnastics, minus the apparatus aspect.

The individual sport of gymnastics comes with a great deal of limitations. Whether due to roster space or the physical ability to compete, many athletes actually never get the opportunities they deserve to advance to the highest levels of the sport. Hailey Cowan was one of those athletes.

“There’s so many gymnasts out there that don’t get an opportunity, because there’s only so many schools with gymnastics, and each school only has room on the roster for about 12 girls,” Cowan told Combat Press. “So, there were thousands and thousands of gymnasts that weren’t getting the opportunities, because there weren’t any. So, this really great lady, Felecia Mulkey, created this new sport, which is basically just the floor aspects of gymnastics. Like me, a lot of girls grow a little bit too tall and have to quit gymnastics, because they can’t fit on the bars. She created this new sport, and it was just a huge opportunity for women like me.”

Cowan had been a gymnast since she was 5 years old. She was competitive by age 8. However, at just under 5-foot-9, she grew too tall for traditional gymnastics. She was fortunate enough to join the inaugural acrobatics and tumbling team at Baylor University in her home state of Texas. This opportunity also provided her with a scholarship, something few and far between for gymnasts. However, as her final year of college rolled around, her athletic career was derailed.

“I had a really bad shoulder injury my senior year, but I had already competed in junior meets, so I had used up my eligibility and couldn’t medically redshirt,” Cowan explained. “That’s not really how I wanted to go out athletically after all those years. I blew out my shoulder. I tore my labrum. I tore my supraspinatus, which is part of your rotator cuff, and I tore a tendon. So, basically, I just tore it all.”

The sport Cowan had been training for her entire life was effectively gone in the blink of an eye. However, when one door closes, another opens.

“When I graduated, I tried to find something that I could use my skills I had developed since I was five years old,” Cowan said. “Everyone pointed to CrossFit, and I didn’t want to do that. I always loved MMA. I’ve always been a huge [Georges St-Pierre] fan. He used gymnastics a lot for his training, so I decided to try MMA. I walked into a really great gym with really great coaches, and called and quit my job to start training full-time immediately.”

At 22 years old, the lifelong athlete had found a new calling. It was with the full support of her family that she dove into MMA head-first.

Cowan grew up in Waco, Texas. Her parents are both pastors at a non-denominational church, but they were both athletes in their own right. Her father played football at Midwestern State in Wichita Falls. Her mother was a softball player at St. Paul Bible College in Minnesota. The Cowans raised all three of their daughters to be athletes. Hailey and her middle sister, Kaelyn, went on to become NCATA All-Americans in acrobatics and tumbling at Baylor. The youngest sister, Riley, is currently on the track team in high school.

“We were in the church or in the gym all the time,” Cowan said. “I didn’t have a normal childhood, because it was so competitive early on. Basically, I went to school every day. I would leave school at 2 p.m., get to the gym at 2:30, and I trained from 3 p.m. to 8 p.m. every day. It was all good, kept me out of trouble, got me a college scholarship, and I’m not complaining.”

The Cowan family got behind Hailey’s foray into MMA, as did her coaches. However, it was not in a wanton manner. The transition into her fighting career was well planned out.

“My coaches made me do two months of footwork before I threw one punch,” explained the native Texan. “It sounds really silly, but now, when I go back and watch my fights, all the commentators talk about is my footwork. I competed in quite a few jiu-jitsu tournaments before I even sparred with strikes. But the first time I ever got hit in the face — I was kind of nervous, because my coaches were worried about how I would respond — I actually bum-rushed my training partner. Not so good when you’re training, but my coaches were really excited that I didn’t run away.”

It takes a different kind of person to enjoy getting punched in the face, but it wasn’t long before Cowan was in the cage for her amateur debut. In August 2017, the former gymnast faced Anel Cantu, a former wrestling champ in high school.

“I didn’t really know anything about my opponent, but I found out she was like a really good, multi-time wrestling medalist,” Cowan said. “I’m kind of glad I didn’t know that. I knew she wrestled, but that was it. I won that fight by unanimous decision. I had a really good head kick in that fight, so everyone decided I was this great striker, but I always kind of saw myself more as a grappler. I like to grab people, and not necessarily just jiu-jitsu, but I like to hold people on the ground and against the cage. I kind of fell in love with striking after the first fight.”

Cowan’s second fight was originally lined up to come against Victoria Leonardo, but Leonardo had to pull out. Cowan ended up fighting Christina Ricker instead.

“I was supposed to go out and strike, but in the first exchange, I rolled my ankle bad, so I ended up wrestling,” Cowan said. “We were trying to keep that fact that I can wrestle well a secret, so that didn’t work out as planned. That was for an amateur title, and I won by decision. My last fight was for [Legacy Fighting Alliance] in February, and I won that one by first-round TKO.”

In just six months, the gymnast-turned-acrobatic-tumbler-turned-MMA-fighter had racked up a 3-0 amateur record.

A couple months ago, the LFA came calling once again. On Friday night, Cowan will be back in action once again at LFA 40. She will finally get her crack at the aforementioned Leonardo, but this one will be a bit different.

“The girl I’m fighting, Victoria, I was supposed to fight in December, and we were very comfortable with her as an opponent,” said Cowan. “I’m a big game-planner, and my coach is a big-game planner, so I had a game plan set and ready for six weeks back in November before the December fight. But this time I got nine weeks to prepare for her. I actually wanted one more amateur fight, but they offered it as a pro fight. We were already going to fight her as an amateur anyways, and personally for me, the longer the rounds, the better. I also have a style where I probably would have finished my first two fights if elbows were allowed.”

The setting is The Bomb Factory in Dallas. Cowan will already make her pro debut only nine months after her first amateur fight. She, along with coaches Jake and Nick Brennan of Blitz Sport USA, have studied Leonardo for what has now totaled almost four months’ worth of camps.

“I honestly think I’m technically better everywhere,” Cowan said. “She’s a grinder, though. She’s one of those fighters who kind of makes everybody look bad. I think that, technically, I will out-technique her everywhere, but she has quite a bit more experience than me. You know, cage time is a big deal, and I understand that, but I feel really confident everywhere.”

In addition to her coaches and training partners at Blitz, Cowan also has the opportunity to train with UFC newcomer Andrea Lee from time to time.

“I live about four and a half hours away from Andrea,” Cowan said. “So, I just train there at random. I will go down there when she needs a camp, and she [will] come help me out if I need help.”

Cowan has come a long way in her athletic career. Never in her wildest gymnastics-and-acrobatic-tumbling dreams would she have ever imagined fighting in a cage for money. On Friday night, at LFA 40, she will finally get the opportunity to pursue her new dream.

Cowan would like to thank her coaches and training partners, her parents, her sisters and all of her fans and sponsors: White’s Pickle Salsa, LNM Homes and MHP. Follow Hailey on Twitter: @Hailey_Bre
Advertisement