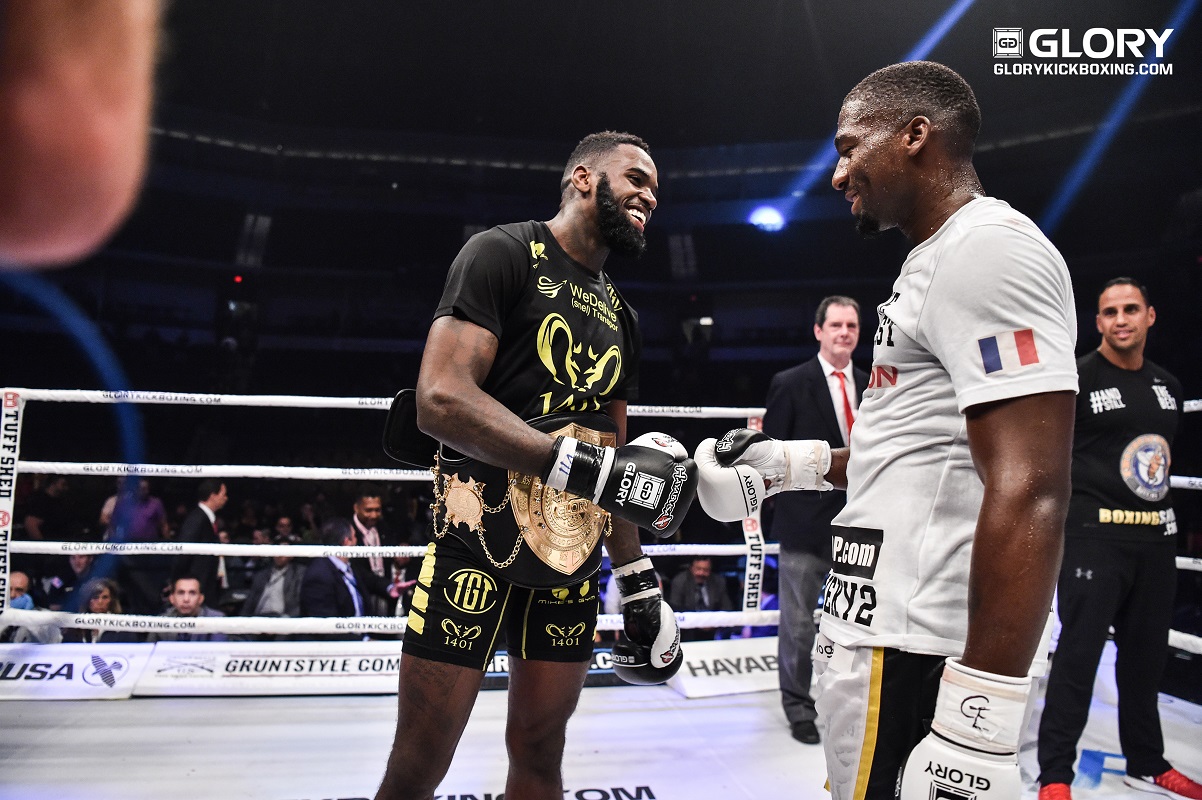 What’s Next For the Winners and Losers at GLORY 44: Chicago

GLORY 44: Chicago took place last weekend at the Sears Centre in Hoffman Estates, Ill. Following the exciting event, we break down what’s ahead for the winners and losers of everything from the first fight of the night to the main event for the GLORY welterweight title.

Murthel Groenhart: The controversy surrounding their second meeting warrants a third chance for Harut Grigorian to best Groenhart. Grigorian has won 14 of his past 16, including victories over Tayfun Ozcan, Antoine Pinto, Karim Benmansour, Nordin Ben Moh, Marco Piqué and Danijel Solaja. The newly crowned welterweight king Groenhart has won seven of his past eight, including victories over Grigorian, Yoann Kongolo, Thongchai and Cédric Doumbé.

A fight between Groenhart and Grigorian works unless the promotion wants to afford Doumbé a chance for an immediate rematch. Given GLORY’s decision-making following close fights in championship contests, it’s doubtful Doumbé gets another crack at the title coming off a loss. Groenhart should meet Grigorian for the third time. The build-up to the fight makes for a marketable storyline for the kickboxing fanbase.

If Grigorian doesn’t get the shot, then the winner between Nieky Holzken and Alim Nabiev has a case. Yoann Kongolo also has an argument after defeating Yohan Lidon at GLORY 42, but Groenhart bested Kongolo to earn his second chance at a GLORY world title.

Tiffany van Soest: The champion reconnected with coach Alex Palma at Blue Ocean Muay Thai in San Diego. The move paid dividends for the American titleholder, who looked great in her fourth-round stoppage victory over late-replacement opponent Meryem Uslu. Van Soest was originally scheduled to face Turkey’s Funda Alkayış, who is one of the more experienced fighters in the weight division. Unfortunately, that fight didn’t come to fruition. However, the door is not shut to the possibility of this fight happening in the future.

However, there is one name that stands out above the rest as van Soest’s next foe: Anissa Meksen. Meksen currently sits atop the Combat Press women’s pound-for-pound rankings. The 29-year-old made a successful promotional debut against Brazilian Jady Menezes at GLORY 43. Meksen, who has scored victories over the likes of Iman Barlow, Gloria Peritore, Ashley Nichols, Maria Lobo, Eva Naranjo and the aforementioned Uslu and Alkayış, is considered by many to be the top female fighter today.

Richard Abraham: The American picked up his fifth win when he defeated Daniel Morales on Friday. His resume still leaves something to be desired, though. His biggest win came in contender-tournament appearances against Casey Greene and Francois Ambang. Abraham lost when he stepped up to strong opponents Antoine Pinto and Jamie Bates. Another step up in competition doesn’t seem out of the question, but the promotion is more than likely out to build his star in his hometown, where Abraham has proven to draw an audience. Abraham would benefit from a fight with someone at the level of Tatneft Cup veteran Konstantin Khuzin, but he may just get a local fighter next.

Michał Turyński: Following his split decision win over Cătălin Moroșanu, the Polish heavyweight deserves an appropriate step up in competition against WKN super heavyweight champion Nicolas Wamba, who has won back-to-back fights over Jhonata Diniz and Nordine Mahieddine inside the promotion. Turyński has fought some of the top heavyweight kickboxers in Europe, and a match with Wamba in France could deliver more than just excitement.

Dustin Jacoby: Jacoby made a successful return to the ring against Sean Choice after nearly a year away following an arm break in his rematch with current GLORY middleweight champion Simon Marcus at GLORY 34. The perfect match-up for Jacoby is another winner from this fight card, Robert Thomas. The Canadian scored a third-round knockout of Warren Thompson on the Super Fight Series. This fight makes sense for Jacoby’s career trajectory, and it also gives Thomas a stiff test.

Victor Pinto: Pinto picked up a big win over Romania’s Adrian Maxim in a closely contested fight. The younger of the Pinto brothers should make a quick turnaround and take on top contender Petchpanomrung Kiatmookao at GLORY 46 in China. The Muay Thai fighter, who is coming off a knockout loss outside of the promotion, is already scheduled to compete on the card.

Nate Richardson: Richardson, who won in his GLORY debut with a unanimous decision victory over Rafal Dudek, has a scheduled bout with China’s Qinghao Meng at GLORY 46.

Cédric Doumbé: After narrowly dropping the welterweight belt to Groenhart, Doumbé has a case for an immediate rematch. However, the GLORY welterweight division has been plagued with the same four or five fighters at the top continuously scrapping for the crown. Some new blood would improve the division, and that’s why potential match-ups with Yohan Lidon and Alim Nabiev make sense for Doumbé.

Maybe Doumbé waits out the Groenhart-Grigorian saga, but he probably wants to get back in the win column sooner rather than later. A battle with France’s Lidon could be a huge fight in the pair’s native land, but it’s more likely the promotion tries to get both popular French fighters back into the win column.

There isn’t a fight that makes total sense for the promotion, since Doumbé has reigned over the division for the past year and a half. Giving Doumbé an opportunity to get a win back could lead him to seek work outside of the promotion, but GLORY’s matchmaker should put Doumbé on a show in France against Thongchai, Eyevan Danenberg (if he beats Wellington Uega at GLORY 45), or fellow Frenchman Rémy Vectol.

Antoine Pinto: Pinto showed some improved boxing in his fight with short-notice replacement Zach Bunnel. He couldn’t quite carry that momentum into the welterweight contender tournament finals against Harut Grigorian, however. Pinto has two wins inside the promotion. A match-up with England’s Jamie Bates makes sense for both fighters. Bates used his reach to defeat Richard Abraham in his GLORY debut. Pinto would benefit from fighting a bigger opponent to further develop his kickboxing arsenal.

Cătălin Moroșanu: The Romanian heavyweight star arguably won the contest against Michał Turyński, which makes a match-up with D’Angelo Marshall seem unrealistic, but it offers both men a potential big payoff. Marshall dropped his GLORY debut to Guto Inocente, who just defeated the second best heavyweight in the world, Benjamin Adegbuyi. Marshall erased that defeat with back-to-back victories over Anderson “Braddock” Silva and Mohamed Abdallah at GLORY 41. Moroșanu offers a test for Marshall, who, like Ismael Londt before him, won’t receive a heavyweight title shot after winning a contender tournament.

Karim Benmansour: The experienced French Muay Thai specialist has now lost in all three of his contender-tournament bids. Benmansour still holds his place near the top of the GLORY rankings because of his victories over Alan Scheinson and former FFC champion Eyevan Danenberg. However, losses to Groenhart, Grigorian and Kongolo put Benmansour on the outside looking in. A fight with Yohan Lidon might make the most sense to give Lidon a push to the top of the division. However, Benmansour is more likely to take on a fighter like Konstantin Khuzin, Meran Zangana or Pavol Garaj.

Daniel Morales: The Chicago native couldn’t top fellow American Richard Abraham. However, he wasn’t completely outclassed. Morales has made improvements to his game over his GLORY tenure. His record doesn’t reflect those developments, but his trajectory is trending upward, even if it means taking a long-term approach to his matchmaking. The promotion should give him a winnable fight against a local fighter who has had success on one of GLORY’s American undercards, or with a fighter who has recently competed and lost, like Zach Bunnel.

Adrian Maxim: The Romanian slugger won the Wu Lin Feng one-night, eight-man 63-kilogram tournament earlier this year. However, he fell short in the Road to GLORY: UK tournament semifinals, where he met current GLORY fighter Bailey Sugden. Maxim impressed in his debut, but a return to China seems appropriate. A fight with young Chinese prospect Yuhang Xie, who won his GLORY debut against Chris Mauceri, is sure to be a crowd-pleasing affair.