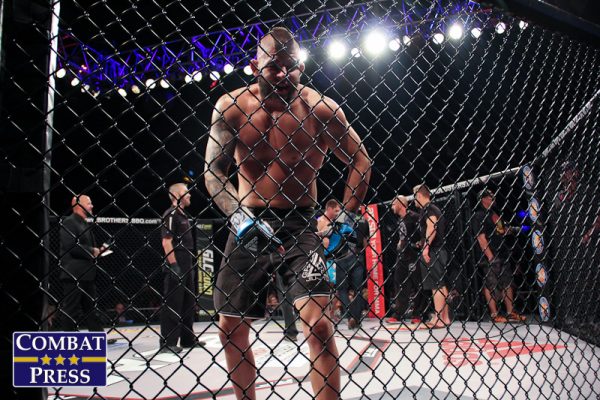 The art of cosplay — dressing up as a character from a movie, book or video game — is popular in some circles in mixed martial arts. Fighters who compete in Invicta Fighting Championship are well known for dressing up as their favorite characters during the weigh-ins for an upcoming card.

If Legacy Fighting Alliance’s Gabriel “Zangief” Checco decided to engage in cosplay during his next weigh-in, he wouldn’t really need a costume. That’s because he already bears a striking resemblance to a character from the popular video game Street Fighter. In fact, that’s how Checco received his nickname.

“I got the nickname from some guys at the gym in Brazil, with my look and my beard,” Checco told Combat Press, adding that he enjoyed playing Street Fighter and other video games while growing up in his native country.

However, while Zangief’s strengths in the game are his impressive height and bulk, Checco said his own strength lies in his jiu-jitsu. He has achieved the rank of black belt, and this is why he believes all 10 of his overall victories while fighting as a middleweight have come via knockout or submission.

“I see myself as a way more complete fighter,” Checco said. “With my experience in jiu-jitsu, I’m way more ahead than other fighters. Other guys don’t have as much background with jiu-jitsu, and you can’t go as just [an] MMA fighter. You have to train everything. It’s all part of MMA.”

Checco doesn’t rest on his laurels with his jiu-jitsu, however. He splits his time between running and teaching at his own jiu-jitsu academy and improving his striking and wrestling at Xtreme Couture in Las Vegas.

“I train jiu-jitsu with my students and do my striking elsewhere,” Checco said. “You have to be very organized in order to have classes and the time frame can be difficult, but I like teaching jiu-jitsu. I don’t see it as work.”

Checco, 32, has trained in jiu-jitsu since he was 15 years old. He became interested in competing in MMA after watching the UFC in Brazil. Checco traveled back and forth between his home country and the United States from 2008 to 2014, when he came back to the U.S. with his wife for good and opened his academy.

Checco turned pro in 2012 and won his first seven fights before signing with the former Resurrection Fighting Alliance in 2014. He dropped his promotional debut — a bout for the middleweight title — to Jake Collier. Checco went 3-1 in his next four fights, which was going to lead to an opportunity to compete on Dana White’s Tuesday Night Contender Series on UFC Fight Pass. However, a series of personal issues led to Checco dropping out from the show.

“It’s unfortunate that it happened, but I’ve never backed out of a fight and I don’t think I will need [another chance on DWTNCS] after this fight,” Checco said of his upcoming LFA 39 bout, which takes place on Friday, May 4. “I think after this, I will go to the main [UFC] roster.”

Checco faces Ian Heinisch, who holds a 9-1 record, for the interim LFA middleweight title on Friday’s card. It is both Checco’s first fight under the LFA banner and his third title fight. He is confident that this will be the charm and he will secure his first title belt.

“But there’s really no difference to me,” Checco said. “I see it as just another fight.”

Even though Checco is somewhat ambivalent about fighting for a belt, it doesn’t mean he won’t stop working to improve as a fighter. Perhaps one day “Zangief” will even become as dominant as the video-game character of the same name.

“I don’t really have goals, but I want to challenge myself to get better,” Checco said. “When you see yourself on TV and all the lights are on, you can see how good you really are. You’re not just in a gym working with other people. Fighting in front of people means I get better and less nervous. I just fight with myself, and I want to go far and get paid well. But I have to take baby steps.”