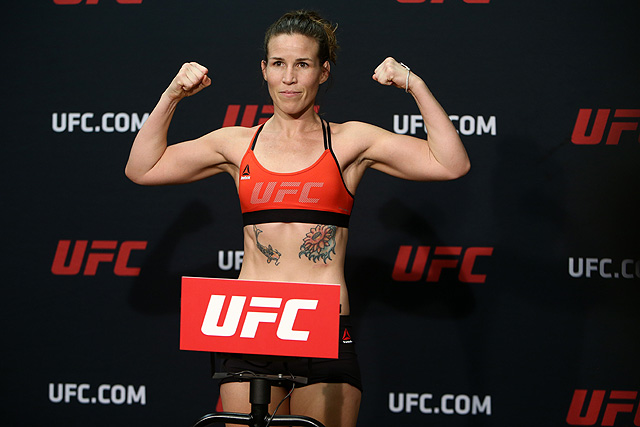 While many think the push to increase compensation for mixed martial artists is only about money, it is actually about much more. Just ask the fighter who is quickly becoming the face of the movement.

UFC bantamweight Leslie Smith, in addition to her fighting career, is also the interim president of Project Spearhead. Smith started the organization earlier this year in an effort to advocate for a fighters’ union to improve conditions in several areas, including compensation, collective bargaining and benefits, both for healthcare and retirement. Even though Project Spearhead is only a couple of months old, Smith has been a longtime advocate for fighters.

“I was invited to a gym in [Las] Vegas a couple of years ago, and people were talking about fighters being used up and thrown away,” Smith told Combat Press. “They talked about not being paid [and] not being reimbursed for their likeness for advertisements. After I was first in the UFC, I didn’t know that other athletes could experience that.”

Smith described everything as “great” when she first joined the UFC in 2014, but said everything changed with the introduction of the UFC’s Reebok Outfitting Policy in 2015.

“It was a blatant disregard for fighters’ well-being,” Smith said. “I’ve heard about fighters who are fighting with injuries, because now they can’t afford to pass up fights. There are retired fighters and ex-fighters who are dealing with vertigo and are injured. They can’t stand up after taking an accidental knee to the head during training without feeling like their head is spinning.”

“Fighters might be reluctant to come out in support, but we just need them to sign cards,” Smith said, adding that the cards will be collected and submitted anonymously. If Project Spearhead receives signed authorization cards from 30 percent of fighters currently under contract to the UFC, it can submit the cards to the National Labor Relations Board, according to the group’s website.

The NLRB will then evaluate whether UFC fighters are official employees or independent contractors, based on a list of 11 factors. If the board rules that the fighters are employees and are eligible to unionize, the group will conduct an election where a majority of fighters must vote in favor of Project Spearhead. Another election will be held afterwards to fill out the group’s executive board and officer roles.

Smith made a point to emphasize that Project Spearhead is not an adversary to the UFC.

“I love being in the UFC,” she said. “I wouldn’t trade it for the world. We’re not being combative toward the UFC; it’s not us versus them. The fighters just don’t have any power.”

“The MMAFA wants to create competition, and that’s fine,” Smith said. “But I feel like all fighters need change, including insurance, and to be paid for the sacrifices we make, and [to] have retirement benefits and post-fight medical care. The MMAAA had little to no follow-up after some large press conferences. Bjorn [Rebney, who helped create the MMAAA] is distrusted by too many fighters because he did not previously address some of these same concerns.”

Smith, whose record inside the cage stands at 10-7-1, is currently juggling her work with Project Spearhead and her preparation for her bout on UFC Fight Night 128 on Saturday, April 21. Smith is set to face undefeated six-fight veteran Aspen Ladd.

“Ever since I started working on a union, I have a different attitude toward fighting,” Smith admitted. “I better enjoy the moment, because there are no guarantees. It makes it a little sweeter.”

Smith’s fight with Ladd is the last on her current UFC contact. She would like to re-sign with the promotion while continuing her work with Project Spearhead.

“I respect and like Dana [White, UFC President] and the UFC,” Smith said. “They’re the vehicle that brought MMA into the mainstream. But now it’s time to put fighters in the front seat.”

Smith also plans to go back to school to pursue a degree in international law to help her with her advocacy for better working conditions for fighters. She noted that certain fighters may not want to rock the boat with the UFC because they think the promotion “takes care of them.”

“We don’t have a lot of say or the same benefits as other athletes,” Smith said. “Baseball players, basketball, football and hockey players all have players’ associations that protect them. Many fighters may not realize how bare bones their contract provisions are. It’s time to ask for more and take steps to get more, and to sign a card and start demanding more.

“If you don’t want to make a fuss, then that’s a red flag, because it shows that the employer actually is not looking out for you. We’re not 19-year-old kids. We’re responsible adults, and we’re supporting families and kids. It’s not enough just being on TV. It’s time for fighters to stand up for themselves.”