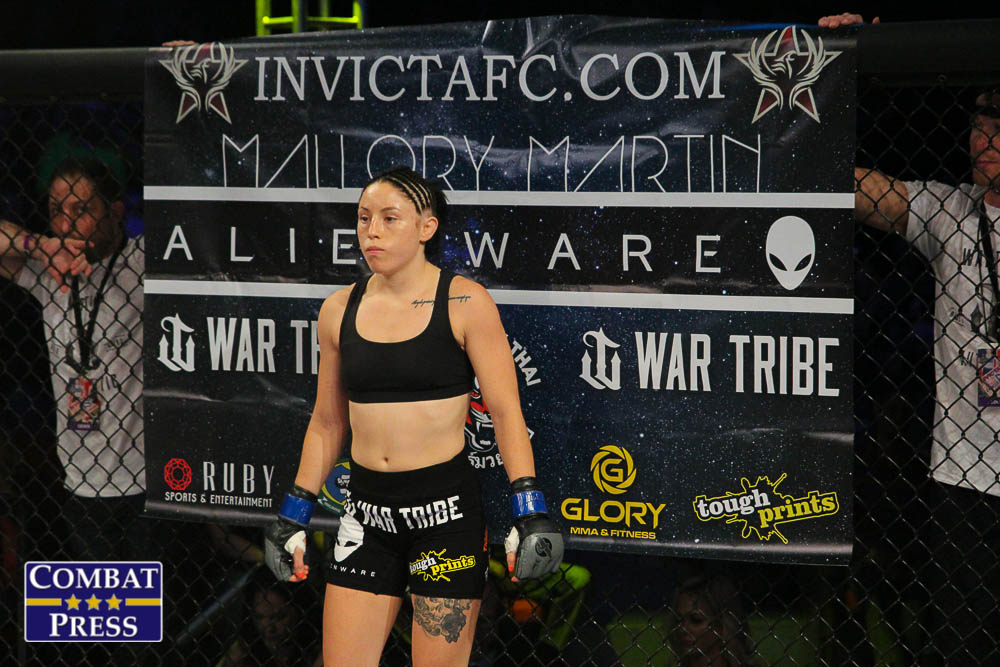 Some fighters fall into a career in mixed martial arts purely by happenstance. Other fighters may have pursued other athletic endeavors and made a left turn into MMA because they wanted to do something different. Legacy Fighting Alliance strawweight Mallory Martin’s MMA career, however, began with a family dinner.

“I started training in jiu-jitsu, Muay Thai and wrestling when I was a senior in high school, and once I graduated I went straight to college,” Martin told Combat Press. “But one night I went out to eat at Chili’s with my parents, and they were showing UFC on the TVs there. I said I wanted to do that, and my dad told me that if I found a gym to join, he would support me 100 percent.”

So Martin joined up with Zingano BJJ in Colorado and began training for her fighting career, taking cues and inspiration from fighters like the UFC’s T.J. Dillashaw and Justin Gaethje and Bellator MMA’s Michael Chandler. While Martin trains at a gym started by the late husband of the UFC’s Cat Zingano, she also got the opportunity to train with another UFC bantamweight fighter when she went to Tiger Muay Thai in Thailand and worked with Valentina Shevchenko and her sister, Antonina.

“She’s awesome,” Martin said of Shevchenko. “She’s super tough, and people think she’s just a striker, but she also has great jiu-jitsu. She’s a true mixed martial artist, and it was really nice to train with someone on that level.”

Even if Martin admits to being a little biased, she’s picking Shevchenko to defeat UFC bantamweight champion Amanda Nunes at UFC 215 on Saturday, Sept. 9.

“But I think it will go the distance,” Martin added.

Martin made her amateur debut in 2014 and compiled a 6-1 record while competing for organizations such as Sparta Combat League and the former Resurrection Fighting Alliance. She turned pro last year and has split her first two fights. She is coming off a decision loss to Sunna Davíðsdóttir earlier this year while competing for Invicta FC.

“I don’t think I lost that fight, but I can still work on things,” Martin said. “I took it serious as an amateur, and my goal was always to be a pro, but not to rush it. I just need to continue to grow and learn and keep training.

“It was awesome being in Invicta. They take care of you 100 percent, and I’m very humbled and grateful to have been a part of it. There were a couple things I did wrong in that fight, but I still felt I grew, because I had to push myself to try and get that win.”

Martin is looking to build on her experience in Invicta by competing for another organization known for sending fighters to the UFC. At Legacy Fighting Alliance 22, Martin will face Maycee Barber, who is fighting as a pro for just the second time after winning her first outing.

“I’m looking forward to fighting on a main card for the first time,” Martin said. “I think LFA will become a big promotion. They sent a lot of guys to the UFC, and I think my fight is a really exciting fight. I plan to push the pace, be aggressive and take my chances. I just like the competition and the adrenaline.”

Martin believes women’s MMA seems to be going through a bit of a transitional period, as fans and others find out who steps up to fill the void left by Ronda Rousey. Although there are plenty of worthy candidates, including Shevchenko, Nunes, UFC featherweight champion Cristiane “Cyborg” Justino and UFC strawweight champion Joanna Jędrzejczyk, there’s only one fighter Martin sees as the next person to assume the mantle once held by Rousey.

“It’s very important to have attainable goals, along with big ones,” Martin said. “I want to get to the UFC and fight for the belt. But I also want to just win fights, continue to get booked, grow and keep adding notches to my belt.”