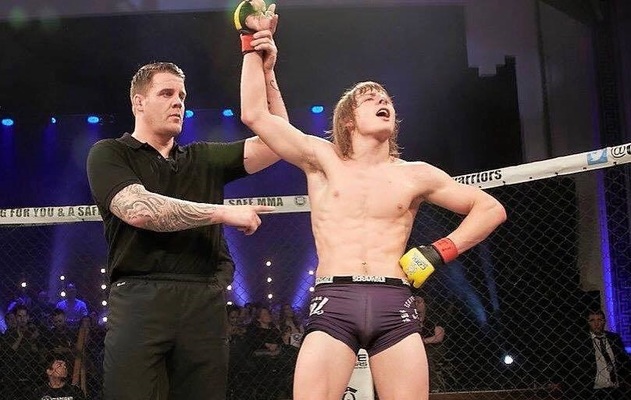 Out of Obscurity: ACB 56, Akhmat Fight Show 35 and Cage Warriors 82

Fresh off a trip to Tajikistan for its 55th installment, the Absolute Championship Berkut organization heads to Belarus for its 56th event. The show, dubbed “Young Eagles 16,” contains plenty of emerging prospects from the region, and perhaps the most promising of this group is Kurban Gadzhiev. The flyweight fighter meets veteran José Maria Tomé in what stands to be his most difficult challenge yet.

Gadzhiev has bounced around between a number of promotions since making his pro debut in 2011. The “Python” scored three submissions and four technical knockouts through his first seven outings, but he missed what could have been a breakthrough fight when he fell ill and was forced out of a Cage Warriors Fight Night 11 bout with UFC veteran Phil Harris. The Krepost Fight Club and K-Dojo product’s undefeated streak was brought to an end when he was dropped by Muin Gafurov in a 2014 bout. Following the setback, the Dagestani fighter rattled off another four wins, including two submissions and a TKO. Much of his career has come in the bantamweight division, but his most notable victory, a decision nod over Asulan Toktarbaev, came in a flyweight outing. Gadzhiev, who is in his mid-twenties, is a Russian and world combat sambo champ. He has a solid striking game that features plenty of leg attacks, but he also has strong takedowns and the ability to finish fights with his grappling skills.

The 35-year-old Tomé was one of the earliest names to emerge when the flyweight division enjoyed its rise to the UFC level. The seasoned veteran made his pro debut in 2004 and was already 33-3 by the time he made his UFC debut in 2013. Along the way, the Brazilian suffered his only losses to Leandro Higo, Jussier “Formiga” da Silva and Carlos Oliveira. Meanwhile, he notched victories over a long list of mediocre opponents. His UFC debut came against John Lineker, and Lineker finished Tomé with strikes in the second round. The Team Nogueira fighter fell again in his only other UFC appearance, which came against Dustin Ortiz. Following his UFC release, Tomé won four straight and claimed a flyweight title on the Brazilian circuit. He made his ACB debut in October in a championship fight for the vacant ACB flyweight title, but he was submitted in the fifth round by Askar Askarov.

Tomé doesn’t fall often, but when he does, it’s against the best competition he’s encountered. Gadzhiev is another tough fight for Tomé. The Dagestani fighter should be able to chop away at Tomé’s legs before looking for takedowns. Tomé’s a talented grappler, but he’s been finished by submission three times. Gadzhiev should be able to gain the upper hand regardless of where this fight goes. Tomé has been susceptible to the knockout lately, so the sambo champ Gadzhiev could also opt to keep the fight standing and hunt for the knockout. No matter which strategy Gadzhiev chooses, he should be able to finish Tomé and move a step closer to challenging for ACB’s flyweight crown.

While ACB heads to Belarus, another top promotion in the region, Akhmat Fight Show, travels to Kazakhstan for its 35th card. This card features two very intriguing prospects. Said Nurmagomedov, the brother of UFC fighter Khabib Nurmagomedov, will defend his bantamweight title against Anderson dos Santos. Meanwhile, the main-event spotlight lands on Khusein Khaliev, a 16-1 fighter who will put his lightweight title on the line against Valmir Lázaro.

Khaliev also has a brother — welterweight fighter Adam Khaliev — who was signed by the UFC, but Adam never did fight inside the Octagon. Khusein is a much more experienced fighter who also has the potential to make it to the big show. He’s a highly decorated martial artist who even holds a world championship in Daido-Juku karate. He trains out of the K-Dojo camp. Khusein debuted in 2010 and won his first eight fights, including seven by stoppage, before suffering a loss to Yasubey Enomoto. The “Captain” rebounded from the loss by reeling off eight more wins, all stoppages. These weren’t just tomato-can opponents, either. Khaliev derailed the rise of prospects Mihail Serdyuk, Samuel Trindade and Alexandre Cidade by handing all three submission defeats. He also topped established veterans Tenyeh Dixon, Yoshihiro Koyama and Shamil Zavurov. His knockout of Zavurov, who typically fights at welterweight, earned Khaliev the Akhmat lightweight strap.

Lázaro was set to be Khaliev’s semifinal opponent en route to the Chechen fighter’s run to the championship, but the pairing was scrapped and Lázaro was replaced by the aforementioned Cidade. Now, “Bidu” gets his chance to wrestle the title from Khaliev’s grasp. The Nova União export should be a familiar name to fight fans. After making his pro debut in 2007 and compiling a 12-2 mark by 2014, Lázaro signed with the UFC and made his Octagon debut at UFC Fight Night 49, where he suffered a loss to James Vick. He rebounded by eking out a split decision over James Krause, but his third UFC outing ended in disappointment when he was edged in another split decision, this time against Michel Prazeres. The 31-year-old was let go by the UFC and returned to Brazil, where he knocked out his next two opponents.

Lázaro, as could be expected from a member of Nova União, is a solid striker with a long list of knockout victories. He’s a true threat to opponents on the feet, but he was disappointing through his three Octagon outings. He seems to falter against better competition, and Khaliev could be an even tougher opponent than Vick, Krause or Prazeres.

Khaliev’s performance against Zavurov was impressive. He utilized a strong kicking attack, and threw in some spinning strikes as well. His jumping knee was perfectly timed and not telegraphed, and it landed with enough force to separate Zavurov from consciousness. Lázaro might be a knockout artist, but his failings against the likes of Vick and Krause aren’t a good sign. Khaliev has the striking skills to go toe-to-toe with the Brazilian on the feet, but he also has an excellent wrestling base to fall back on if he can’t get the job done on the feet.

Lázaro has a tendency to hang in there till the final bell, but Khaliev’s a proven finisher. The Chechen fighter will be out to prove that he’s not going to suffer the same fate as he did against Enomoto. Khaliev will finish this fight with another impressive knockout.

In 2013, the Cage Warriors promotion bid farewell to Conor McGregor when the star fighter signed with the UFC. Now, the British promotion might have another future UFCer in its featherweight throne. Paddy Pimblett claimed the crown in September and made one successful defense before the end of 2016. The young prospect is out to extend his streak of defenses to two, but challenger Nad Narimani stands in his way. The pair clash for the featherweight crown in the headlining bout of Cage Warriors 82.

Pimblett checks in at just 22 years old. “The Baddy” already has 14 fights under his belt as a pro. He made his debut in 2012 and won his first four fights before stumbling against Cameron Else in a 35-second submission loss. The Next Generation MMA Liverpool product responded to the loss by capturing nine straight wins while stepping up to face more experienced competition. Pimblett has finished three fights via TKO and scored one submission due to strikes, but chokes account for the majority of his victories. He captured the featherweight title in the Full Contact Contender promotion and made one successful defense. He most recently snagged the vacant Cage Warriors featherweight crown with a first-round TKO of Johnny Frachey and defended it against The Ultimate Fighter 22 alum and UFC veteran Julian Erosa.

Narimani seems like a step down for Pimblett after the Erosa fight, which the Brit won by unanimous decision. The 29-year-old Narimani debuted in 2011 and won his first five fights, including a split decision over TUF 22 cast member Marcin Wrzosek. His move to Cage Warriors came with a stumble when Narimani dropped a split decision to Graham Turner. He won his next two fights, but then suffered a setback against Alex Enlund, who edged Narimani on the scorecards. The Bristol Impact Gym fighter has since added two more wins. Overall, he’s finished five fights by submission and scored two knockout victories.

The 5-foot-10 Pimblett can usually utilize length to his advantage on the feet in order to connect with strikes, especially his kicks. His stand-up does look stiff and awkward, though. His real gift is the submission game. Opponents aren’t safe in the clinch, and they can find themselves in quick trouble if they score the takedown or land on their back off a Pimblett takedown.

Narimani also relies heavily on his grappling and submission skills, but he’s not quite at the same level as the young phenom Pimblett. We’re likely to see some fun scrambles and plenty of submission attempts in this one. Pimblett proved himself with his win over Erosa. He’s young and still improving, and Narimani should be his latest victim. Narimani’s a tough out, though, so Pimblett may have to settle for another decision nod.