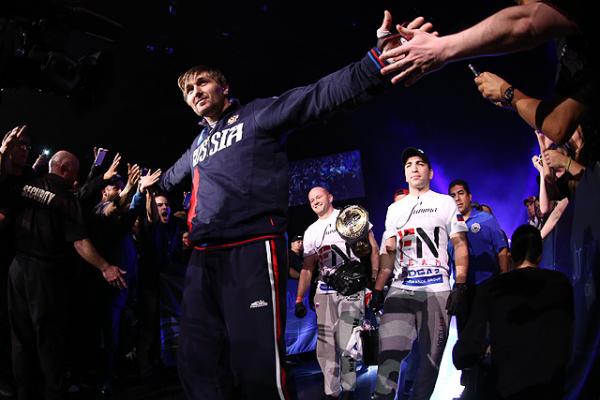 The 32-year-old Minakov enjoyed a reign atop Bellator’s heavyweight division, but he was stripped of the title for failing to defend the belt. The Russian made his way back to his homeland and the Fight Nights Global series following his departure from Bellator. He has remained undefeated through 19 fights while scoring 10 knockouts and seven submissions. The sambo world champion and accomplished judoka has topped the likes of UFC vets Eddie Sanchez, Fabiano Scherner and Cheick Kongo, as well as current UFC fighter Alexander Volkov.

Bigfoot was once among the world’s elite heavyweights, but the 37-year-old Brazilian has taken a heavy tumble down the mountain. He unsuccessfully challenged Cain Velasquez for the UFC heavyweight crown in 2013, and the quick TKO loss signaled the start of Silva’s downfall. He has fought eight times in the aftermath of the failed title bid. His exciting fight against Mark Hunt that originally ended in a majority draw was eventually ruled a no-contest when Silva failed a post-fight drug test. He lost six of his next seven fights, including five defeats by some form of knockout. His most recent defeat came at the hands of the unheralded Ivan Shtyrkov in the German Titov Boxing organization.

Bigfoot was once among the top brawling heavyweight in the world, but these last several years have been cruel to him. He was dropped by Andrei Arlovski, Frank Mir, the aforementioned Hunt, Stefan Struve and Roy Nelson before departing the Octagon. Even his post-UFC venture ended in failure, although Silva made it to the scorecards against Shtyrkov. The Brazilian’s chin is not holding up well.

Minakov’s talents are being wasted in Russia, where he’s collided with the likes of Peter Graham and DJ Linderman in his two most recent outings. The former Bellator champ has proven he’s a world-class fighter, though, with his title run and more recent victories over Adam Maciejewski, Gerônimo Dos Santos and UFC castoff Josh Copeland. While Bellator’s heavyweight division has often garnered criticism for its slow, plodding heavyweight fights, Minakov can’t be blamed. The Russian scored four victories by knockout or technical knockout before outworking Kongo en route to a decision nod in his final Bellator appearance.

Minakov has the ability to finish the fight anywhere, but his real weapon against Bigfoot is the knockout. Silva’s chin won’t stand up to the test, allowing Minakov to remain undefeated through an impressive 20 professional fights.

No, he’s not headlining this card, but Dominick Reyes might be the most promising prospect in the lineup for Legacy Fighting Alliance’s 13th effort. Reyes, who has been perfect through five pro outings, has his sights set on the UFC. While it might be too much to presume that a victory lands him a spot in the big show, the light heavyweight fighter gets a veteran test against Jordan Powell that could bring him a lot closer to his dream of fighting inside the famed Octagon.

Reyes could be a ray of sunshine for an aging light heavyweight division. The former NFL hopeful turned to MMA to release his frustrations, and so far those frustrations have been released on four amateur and five professional opponents. The Cage Combat Academy product scored first-round stoppages in all of his amateur outings. As a pro, he’s seen the scorecards once, but the remaining four fights also ended in the first five minutes of action. Reyes made his pro debut in December 2014 and destroyed Jose Rivas, Jr., in just under three and a half minutes. He only needed 55 seconds to submit Jesse Glass. Then came the decision, a unanimous nod over Kelly Gray. Reyes put away his next rival, Tyler Smith, in 95 seconds and then steamrolled Marcus Govan in just 27 seconds. This will be the LFA debut for Reyes.

The 30-year-old Powell provides Reyes with a veteran test, something Reyes has not been faced with up to this point in his young career. The “Juggernaut” debuted in 2013, and he already has 14 pro fights under his belt. Powell lost his debut outing, but he rebounded with a three-fight winning streak. He hit a rough patch and went on a three-fight skid before alternating wins and losses through his next four bouts. Powell is now riding another three-fight winning streak. The Havuk Skwod fighter has spent some time at middleweight, and he’s also ventured up to heavyweight on one occasion. Powell has four submission victories and three wins by some form of knockout, but he has also been submitted on four occasions.

Powell’s last two defeats came to future UFC fighter Marcel Fortuna and UFC castoff Justin Jones. He didn’t last very long with either man. Fortuna submitted him in just 38 seconds and Jones did so in 89 seconds. Powell has had plenty of quick finishes of his own, but they’ve often come against inexperienced or mediocre competition. Reyes lands on the better end of the spectrum of fighters Powell has encountered.

Reyes has an opportunity to score a quick and impressive finish here. While it should turn heads, the UFC might want to see him face more adversity than Powell is likely to deliver.

Piraev, 25, has had a turbulent couple of years since his loss to Mateusz Gamrot. The “Piranha” was scrapped from a May 2016 fight. He was forced out of his next scheduled bout later the same month when he was recalled for army duty. Finally, his bout in April was called off when he was hospitalized due to weight-cutting issues. Now, Piraev will attempt to get his prospect run back on track following more than two years on the sidelines. He trained alongside the likes of Vitaly Minakov, Ali Bagautinov and Gasan Umalatov. Piraev has a background in boxing and sambo, and he has demonstrated solid striking to accompany a ground game that has led to eight submission wins. His first real test came against Benjamin Brinsa, who was briefly under contract with the UFC before the promotion realized that it might have a Neo-Nazi hooligan on its hands. Piraev needed less than two and a half minutes to hand Brinsa, who was undefeated through 13 fights at the time, a triangle-choke submission loss. He has continued the trend of fighting quality opposition in his subsequent bouts, with a list of seven opponents combining for a 70-27 record at the time when they clashed with the Russian. Piraev’s biggest weakness might be his willingness to sacrifice position and even fight off his back in hopes of attacking with submissions.

Lima, 32, has 44 fights under his belt, but he has never established himself as anything beyond a stepping stone for future UFC talent. “Manaus,” who debuted in 2005, has suffered losses to The Ultimate Fighter: Brazil 4 participant Erick da Silva, UFC veterans Iliarde Santos, Ronys Torres (twice), Leandro Silva, Elias Silverio, João Zeferino and Wendell Oliveira. The Brazilian has submitted 13 opponents and stopped an additional six with strikes. He has only been submitted once, but he’s been knocked out on six occasions.

Piraev was likely on track to fight in the UFC before his loss to Gamrot and subsequent hardships. However, the Russian fighter is still young and has plenty of time to rebuild any lost momentum. It starts with Lima, who tends to be on the wrong end of the outcome in fights against top-level talent. Piraev prefers to submit opponents, but he might add another knockout to his resume against Lima.