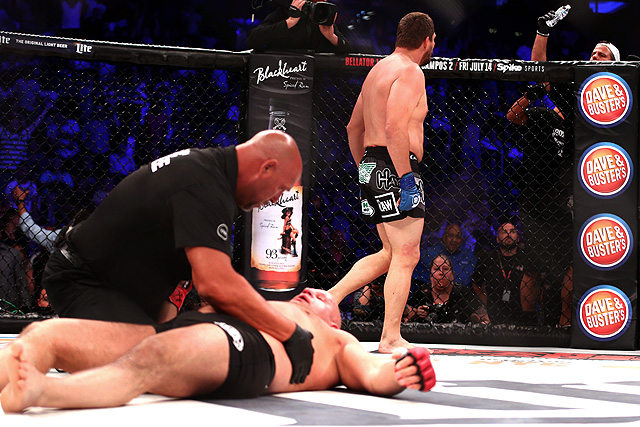 Bellator NYC, Bellator’s first pay-per-view card since 2014, started off with a bang. Six of the first seven fights were finishes and the card was shaping up to be worth that $50 price tag. But after the co-headliner of the prelims, which actually served as Bellator 180, the organization showed its true colors and everything went off the rails.

In the first title fight of the night, we had Phil Davis defending his light heavyweight strap against fellow UFC veteran Ryan Bader in the main event of Bellator 180. Davis and Bader fought in 2015 in the UFC, and Bader took home a boring and controversial split decision. This rematch was no different. Both men were overly hesitant and were even warned about it during the fight. Bader didn’t want to lose his promotional debut, and Davis was hell-bent on never losing to Bader again, especially not on his turf. What ensued was about as boring a title fight as you will ever see. Bader took home another split decision victory over “Mr. Wonderful,” too.

Although this was a godawful fight, it was free on TV. Rarely do you get a title fight headlining the prelims — and rarely do the prelims themselves count as an officially numbered event, separate from the pay-per-view, for a promotion. Maybe we got the bad stuff out of the way early, though, so I invited some friends over and purchased the pay-per-view. Boy, was I wrong.

Bellator NYC opened up with yet another title fight, this time between welterweight titleholder Douglas Lima and promotional newcomer Lorenz Larkin, a UFC veteran. I was looking forward to this fight more than anything. Everyone was expecting a close contest, but Lima caught Larkin clean with a left hook and dropped him early. After the thunderous left hook, Lima dominated from bell to bell and left us fans underwhelmed.

OK, two bad title fights is rare enough. There is no way the rest of this card is not going to be killer! Wrong again.

Next up was the proclaimed “Michael Jordan of MMA,” Aaron Pico, against the unheralded Zach Freeman, who was only there to lose to Pico and make the blue-chipper look good in his debut. Instead, Pico disrespected Freeman’s striking, rushed in and got caught with an uppercut before getting finished with a guillotine seconds later. The fight lasted a whole 24 seconds, and thus the Pico hype train was derailed. All this Michael Jordan stuff was ridiculous anyway. Pico is only 20. He’s never fought in MMA and hasn’t boxed at a high level since he was 15. Maybe one day he could be the MJ of MMA, but for now he needs time and experience.

I wasn’t going to let this fight be a damper on the card. I started to get excited for the next title fight.

Michael Chandler’s lightweight title defense against Brent Primus was not being hyped up much. Chandler had much more experience and has fought the best of the best in Bellator, whereas Primus hasn’t fought anybody with a Wikipedia page. Chandler was a huge favorite, and rightfully so, but I was still excited to see a high-level champion at work. Instead, Chandler tweaked his own ankle after a checked kick and lost his title because of it. As if the night couldn’t get any worse for Chandler, he stood up off the stool to protest the stoppage only to sit back down as his corner took the stool and left Chandler flat on his ass.

OK. Three disappointing title fights and a hype train derailed. With the greatest of all time, Fedor Emelianenko, fighting next and the main event still ahead, there is absolutely no way this could get any worse. Again, I was wrong.

Emelianenko’s fight with Matt Mitrione was overshadowed by the headliner, but the majority of fans were looking forward to Fedor’s comeback. The fight started as expected, with both men a bit hesitant and trying to feel each other out. A minute into the fight, they each threw a jab and dropped each other to the mat. Mitrione, being the younger fighter, recovered more quickly and dropped some ground-and-pound to finish Emelianenko and leave us with our jaws dropped. As if this card wasn’t failing to deliver to its fullest already, Fedor and Mitrione solidified it. Honestly, I didn’t think Emelianenko would win, but I certainly didn’t expect it to end this way.

At this point, I felt I had been duped. Did I really just spend $50 to watch a prospect go down in 30 seconds, a title fight end from a tweaked ankle, and the co-headliner almost end in a double knockout? Sure did. Chael Sonnen and Wanderlei Silva were up next, and unless Sonnen taps the opening second of the fight, flips off the camera and walks away with an easy paycheck, there is no way this could get any worse. Finally, I was right.

The main-event showdown went as expected. Silva threw wild right hands and Sonnen ducked under, took the Brazilian legend down, and held him down the entire fight. During the few exchanges on the feet, Wanderlei was getting the better of Sonnen, but his takedown defense looked nonexistent and had no answer for “The American Gangster’s” grappling.

At the end of the day, I’m happy I bought the pay-per-view. The fights didn’t deliver, but it was $50 for an event me and my friends will reminisce about for years to come, albeit for all the wrong reasons. Pay-per-view sales aren’t out yet, but anything over 150,000 buys would be a success for Bellator. I’m sure they’ll easily hit that number, too. However, Bellator’s biggest event in the promotion’s history showed us that there remains a big gap between Bellator and the UFC. The UFC has put on some pretty terrible cards, but none have even come close to what we witnessed with Bellator NYC.

With top-level talent leaving the UFC for Bellator and Bellator putting on a great card on paper, this seemed like it would be the dawn of the next great promotional rivalry in MMA. Bellator could have been the next Pride or Strikeforce to compete with the UFC. Instead, all Bellator did is show why the UFC is the king of MMA and will be for the foreseeable future.