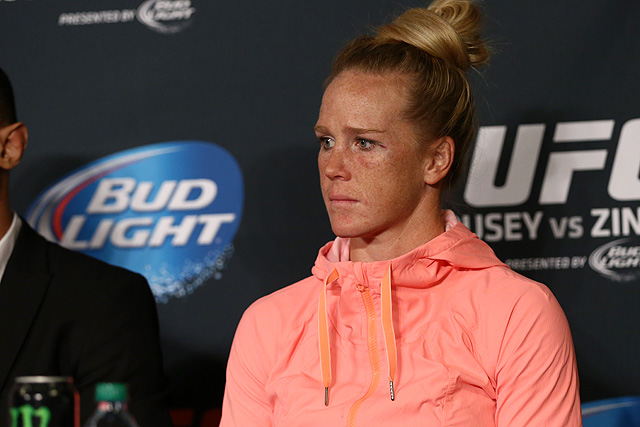 The Trinity of the UFC Women’s Bantamweight Title

For quite some time, Ronda Rousey was the queen of the women’s bantamweight division. That changed at UFC 193 in November when Holly Holm turned in an upset of mammoth proportions. However, it didn’t take long for Holm to lose the belt. Longtime contender Miesha Tate defeated Holm at UFC 196 with a slick submission. Now, the women’s bantamweight division appears to be stuck in what can best be called the equivalent of a love triangle.

The division has become something of a high stakes game of rock, paper and scissors. The rock — in this case, Rousey — has defeated the scissors — Tate — twice before. And the scissors have now cut the proverbial paper — Holm — after the paper covered the rock via a smothering onslaught of Holm’s kickboxing prowess.

See where the love triangle comes in? Let’s break it down in simpler terms: Tate seems incapable of defeating Rousey, but Rousey looked helpless against Holm, who in turn was frustrated by Tate.

Rousey seems like the obvious choice to buck this trend. The 29-year-old was so dominant in her time as champion, dispatching of everybody, including Tate twice, with relative ease. It’s easy to look at this dominance and believe that maybe Holm might have just been the better fighter on the night they fought.

However, that isn’t the case. Rousey might be the obvious choice, but the logical choice to break this belt triangle would be Holm. Yes, it isn’t the once dominant champion, but the one who was able to steal the belt from her and make it look easy. Unlike Tate, Holm already has a win over Rousey. It wasn’t a close win either. Holm thoroughly dominated the former champion.

Holm’s fight with Tate was rather close and could have conceivably been given to Holm if she had pulled through the last round instead of being submitted. It wasn’t that preposterous to have the fight scored in Holm’s favor to that point. To overcome Tate is simply easier than Tate overcoming the wide gap that Rousey has opened over Tate in their two previous fights.

The ground game has always been the glaring hole for Holm in her move from boxing to mixed martial arts. The 34-year-old is such a prolific striker that her ground game had yet to be really tested before the Tate fight. Even against Rousey, Holm was able to keep her distance and pick apart the judoka from range. The same thing could have conceivably happened against Tate. Holm will almost assuredly work to sharpen her ground game to make sure that what happened in her first fight with Tate doesn’t happen again. So, instead, maybe Holm survives on points and steals the decision victory. Who knows? Maybe she cracks the tough Tate with a flush head kick and ends the fight early, should the pair rematch for the belt.

Another key to this love triangle for the UFC gold is the identity of Tate’s next opponent. Someone else could snap the three-way battle for the strap. The newly crowned champion could face Amanda Nunes or try to avenge a loss to Cat Zingano in her first title defense.

The old saying goes, “styles make fights.” That is undoubtedly true. This triangle just once again proves that the adage is fact. Each fighter has her own unique advantage that pushes her past the other and creates an endless cycle of three really great fighters at the top of the division. Can one of these ladies break the cycle? It’s quite possible. And with the support of her camp at Jackson’s MMA, Holm seems like the most likely candidate to get the job done.