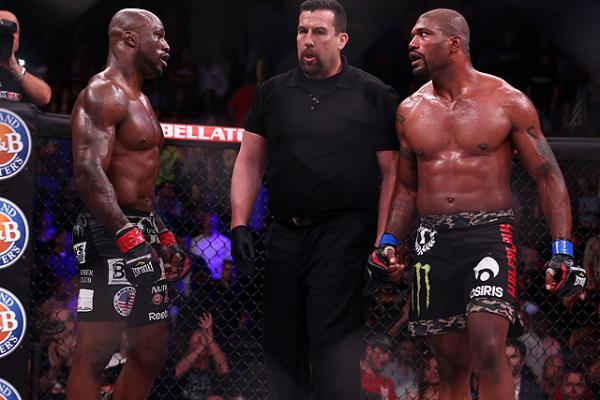 Bellator MMA’s ‘Rampage’ vs. ‘King Mo’ Rematch Isn’t Just About What Happens in the Cage

Bellator MMA has put on some questionable fights in its “legends division.”

The announcement that we will be getting a second fight in the Muhammed “King Mo” Lawal and Quinton “Rampage” Jackson saga was met with not the most overwhelming support. The first fight between the two outspoken light heavyweights was anything but a barnburner. The two men jockeyed for position more than actually trading blows. In the end, Rampage emerged as the victor by split decision.

The biggest gripe amongst fans and media: Why have a second fight when the first one wasn’t thrilling? Nothing will change from the first outing — Lawal will look for the takedown, and if it hits the ground, then it’ll be a bunch of jockeying for the best position between the two. However, everybody is overlooking the reason these two are paired together yet again. It isn’t Rampage’s contract with Bellator, but the fact that these two men will dish out some of the best trash talk of anyone on Bellator’s roster.

The most memorable moment of the first go-around wasn’t the fight itself, but the talk leading up to the contest and the talk after the fight. Lawal and Rampage went at it after the fight, trashing each other for various parts of their fight. Lawal was too conservative in his approach to wanting to just wrestle. Rampage was too aggressive in just wanting to make this a boxing match and try to knock out King Mo. Former Bellator MMA CEO Bjorn Rebney wasn’t even safe from the verbal onslaught of Lawal, who took aim at him in the fracas.

This is what will build up the rematch, too. These men have an unbelievable hatred toward each other that bubbles over when they get put in the same room. They know how to talk up a fight and bounce off each other so well. While fans and media may just remember the fight in hindsight, Bellator has grown a new audience since Scott Coker took over for Rebney as the head of the organization. There are new fans here that don’t know about the first fight. There will be new viewers who tune in after seeing a clip of Mo and Rampage talk on Facebook or Twitter.

Lawal and Jackson have futures in Japan with Rizin if they really want to, because in part to their ability to act up a fight and really sell it. Rampage may consider retirement, but Japan is his true home where he really shined. We want these two guys together not because of the fireworks in the cage that didn’t happen the first time, but what will happen before and after the two decide who’s better in the cage.

At the end of the day, talk and hate sells. Whether we like to admit it or not, pro-wrestling antics still work wonders in any sport, and especially in combat sports like MMA. These are two fighters who want to beat the other out of sheer hatred. Not only beat, but also maul and destroy.