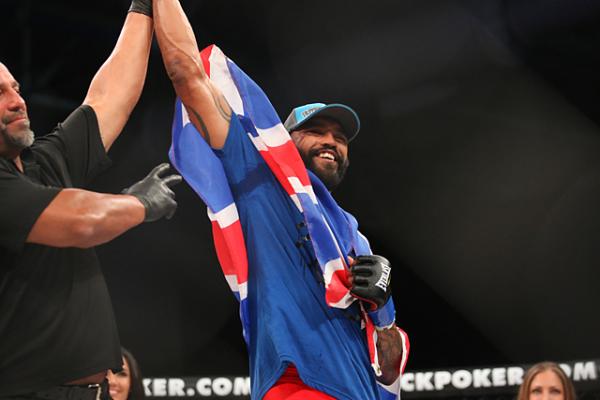 Co-promotion. The UFC may hate it, but Bellator MMA doesn’t. Bellator 173 runs together with one of the top promotions in Europe, BAMMA, for the British organization’s BAMMA 28 show in Belfast, Ireland.

The Bellator main card will consist of five fights featuring some hometown heroes from the United Kingdom and Ireland. The “undercard” portion contains both the main and preliminary card for BAMMA 28.

In just his third fight for Bellator, James Gallagher will be part of the co-main event for the second time against Kirill Medvedovski. Gallagher was originally slated to meet Medvedovski in Israel at Bellator 164, but he was rebooked for another fight. Now, the two will meet in Northern Ireland.

Bellator 173 will also head to the women’s side, where Sinead Kavanagh takes part in a 140-pound catchweight fight against Iony Razafiarison. Shay Walsh and James McErlean clash in a featherweight contest. At welterweight, Colin Fletcher will take on Alex Lohore.

This co-promoted card will take place at the SSE Arena. The card will air on tape delay here in the United States, with the main card airing on Spike TV beginning at 9 p.m. ET.

In his rebound fight after dropping the Bellator light heavyweight title, former champion Liam McGeary draws Serbian upstart Vladimir Filipović. Filipović is just 1-1 over his last two fights and has primarily fought in his native Serbia. Is this just a tune-up fight to allow McGeary to regain his confidence? If Filipović somehow defeats McGeary, does he get a crack at champion Phil Davis?

It’s hard to think that this isn’t just a confidence booster for McGeary, who has faced much better competition already. Tito Ortiz, Emanuel Newton and the aforementioned Davis are superior to Filipović, and McGeary beat two out of the three. Filipović is a late replacement for Chris Fields, and that means just about anything can happen. When you have this short of a time frame to prepare for an opponent, it makes the fight more unpredictable.

McGeary is going to win, however, and probably do so like he did in his first eight fights: by first-round stoppage. This isn’t so much about rebuilding McGeary’s confidence as it is about keeping McGeary warm. If Ryan Bader makes the switch to Bellator, then he is almost assuredly getting the next title shot. Regardless of a win here, McGeary wasn’t going to earn a chance to reclaim his title. He might need a few fights to get back into the title mix, and he should really work on his takedown defense in the meantime. Takedowns were what led Davis to take home the title, and his wrestling was the reason that he was a shoo-in for the title as soon as he signed with Bellator. McGeary already has the striking game advantage over the champ, but he really needs to work on this aspect of his game to stand a chance against Davis.

Filipović won’t give McGeary a chance to practice these skills in live combat. It’ll most likely be a battle on the feet unless McGeary can take it to the ground. If Filipović does somehow pull off the victory, he won’t get the next shot either.

The rest of the Bellator 173 main card reads more like it should be part of the BAMMA 28 undercard. The featured names include James Gallagher, Sinead Kavanagh, Shay Walsh and Colin Fletcher. Can any of these fighters stake a claim to title contention in Bellator following Friday’s event?

Out of those few names, Kavanagh has the most potential. She’s fighting in a catchweight bout at 140 pounds, which means she could contend in Bellator’s 145-pound featherweight division. It’s a brand new weight class for the promotion, and it’s starving for challengers.

Gallagher is another guy to watch for as a possible future Bellator contender. He doesn’t have the possibility to climb the ranks as quick as Kavanagh to reach the title in his division, but the potential is certainly there. Gallagher is 5-0 and only 20 years old, and he trains out of the famed SBG camp, which produced UFC superstar Conor McGregor.

Gallagher has already fought once under the Bellator banner in the co-main event on the Ireland card at Bellator 169. He won that fight with a third-round submission. The performance is a pretty good start and indicator of just how far Gallagher can go. Kirill Medvedovski is good name to test Gallagher, too.

The BAMMA 28 lineup features a number of title fights, plus a featured lightweight bouts that pits Norman Parke against Paul Redmond. Which main-card victor will make the biggest impression on Friday?

It won’t be Parke or Redmond, although they’re both very good fighters in their own right. Instead, Rhys McKee is the pick.

McKee’s last fight against Jai Herbert was a great display of what he can do. McKee delivered a swift first-round knockout against a previously unbeaten opponent. The finish was a nice combination with perfection and power. It’s seriously impressive of someone from his level. Now, McKee will defend his Lonsdale lightweight championship against another unbeaten opponent, Tim Barnett, who is stepping up on nine days’ notice. This is another good test for the unbeaten McKee.

McKee called for a chance with the UFC after his last win, and it’s hard not to see the Octagon as his eventual destination. Maybe Bellator can steal him after this fight and take him for the already deep lightweight division. If the organization was to snag an undefeated European fighter like McKee, it would only help Bellator grow in the future. Plus, the nickname “Skeletor” — a moniker that has been used to describe this writer as well — should be reason enough to sign him.

It’s easy to overlook BAMMA when you’ve got Bellator carrying the headlining portion of this event. However, BAMMA’s cards are always really exciting to watch, so, if by chance you can watch the BAMMA portion, do so. The aforementioned Rhys McKee is a really exciting fighter to watch, and the tussle between Steve Owens and Jai Herbert is another highlight. Just watch it, you won’t be disappointed.