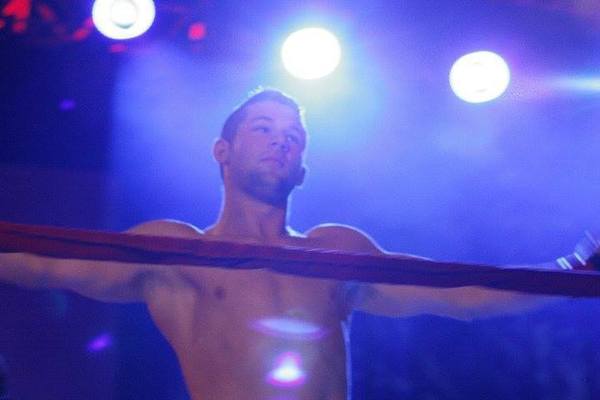 Andrew Todhunter’s shot at the UFC ended prematurely when the fighter suffered ill effects from the weight cut for his scheduled UFC 188 bout with Albert Tumenov. Todhunter has to go back to the drawing board — and to Legacy Fighting Championship — in order to gain another opportunity at the big show. He’ll need to get past veteran Dylan Smith.

The classification of Todhunter’s upcoming bout as a 178-pound catchweight affair could be a sign that the aspiring welterweight needs to consider a permanent move to middleweight, where he has competed in the past. The 27-year-old’s 2015 campaign has been hampered by canceled fights. Prior to his recent stretch of inactivity, “The Sniper” was busy building an impressive undefeated record. He debuted in 2011 and notched submission wins in all seven of his contests through 2014. The Oklahoma-based fighter has a background similar to the UFC’s Tim Kennedy. He excelled as a hand-to-hand combat fighter in the Army and served as a sniper. He has a developing boxing game to go with an aggressive wrestling and grappling attack.

Smith made his pro debut in 2009 as part of the Strikeforce Challengers series (on a card that featured the aforementioned Kennedy) and picked up a submission win over Lemont Davis. He followed the performance up with another four stoppage wins. After a great start through five fights, Smith’s career evolved into a roller coaster ride of wins and losses. He suffered a split decision loss to Marcio Navarro, but avenged the defeat with a submission victory over Navarro in their rematch less than five months later. Then he took a huge step up in competition and suffered a submission loss to David Rickels at Bellator 40. Over the course of his next five fights, “Savage” went 3-2 and avenged both of those losses with wins in rematches against Codale Ford and Levi Avera. Smith stumbled again with a set of losses before claiming a win in his most recent contest. The veteran has only competed once per year since 2013. This will be his first appearance in 16 months. He has only seen the scorecards twice, while finishing his opponent in all of his wins. Eight of his victories came by way of submission and two wins came via strikes. He’s also been finished four times, including three defeats via submission.

Todhunter is facing a game opponent, but one whose inconsistency and fading winning percentage make him a tough sell as a legitimate threat to Todhunter’s unblemished record. Todhunter’s biggest struggles might be at the scale. Todhunter’s wrestling and grappling should carry him to the victory in this headlining contest — Smith is prone to chokes and Todhunter loves to attack the neck — but he’ll need to either prove he can make it to 170 pounds safely or move up a weight class if he wants to receive a second chance with the UFC.

It’s not often that you come across a 30-0 fighter. It’s even less likely to find a 30-0 fighter who is still only 22 years old. One does exist, though. His name is Luis “Japa” Rafael, and he’ll compete on the main card of Aspera Fighting Championship’s 24th event this weekend. Despite his spotless record, he won’t be part of Aspera’s headlining affair for the vacant bantamweight title. That honor goes to Rafael Silva and Derinaldo Guerra. Instead, Japa will fight fellow prospect Gelson “Ceará” Magalhães in a bout that could possibly determine the next contender to the belt.

It’s stunning that the UFC and Bellator have yet to come calling after Japa. The Astra Fight Team product has done it all in a very short time as a professional. He debuted in 2012 and fought 21 times in the 2013 calendar year. His 2014 campaign featured a modest five appearances, and this will be only his third appearance in 2015. Japa has only seen the scorecards on three occasions. He has finished 27 fights, including 18 via submission and nine by way of strikes while bouncing between the bantamweight and featherweight divisions. He is most comfortable on the mat and will even pull guard. He’s an aggressive fighter who hunts for finishes.

Magalhães was to be Japa’s first opponent in 2015, but their bout was scrapped. It was one of three straight canceled fights for the Nova União product, who hasn’t seen action since November 2014. The 27-year-old also debuted in 2012, but his schedule hasn’t been quite as busy as that of his upcoming opponent. Ceará went 1-2 through his first three professional outings, winning his debut via strikes and suffering both losses by some form of knockout. He is now riding an eight-fight winning streak that includes three submission victories and three wins by way of strikes. Magalhães has also bounced between the bantamweight and featherweight divisions.

Magalhães has become a bad luck charm for scheduled fights recently. If he does make it into the cage with Japa, he’s in for a tough fight. These men come from quality camps and they have well-rounded games. Japa has been making quick work of his opponents, scoring first-round finishes in his last five fights. Those contests include several experienced, quality competitors. While two of Ceará’s last five opponents feature winning marks and a significant number of fights, the other three have current records of 0-2.

This should be a very competitive fight that could go anywhere. Their resumes suggest that Japa will have the grappling edge and Magalhães, due to his Nova União backing, will hold the upper hand in the striking department. However, this isn’t necessarily the case. Magalhães has a quality grappling game that should allow him to hang with Japa on the mat, and Ceará’s two losses via strikes are enough to classify him as a candidate for a knockout loss. Overall, Japa’s credentials seem to be the more solid of the two fighters. The young, undefeated veteran will extend his ridiculous winning streak to 31 fights. Will that be enough to get the attention of the UFC or Bellator?

Jungle Fight’s bantamweight title sits vacant at the moment, but that will change this weekend. Two prospects, Maike Linhares and Rodrigo Praia, are set to vie for the crown in the headlining contest of Jungle Fight 81.

Linhares is an undefeated Constrictor Team prospect with eight fights under his belt. He made his pro debut in 2012 and scored finishes in all eight of his fights. he has four submission wins by some form of choke and four victories via strikes. He is dropping down from featherweight to compete for the bantamweight title. His resume includes wins over fellow prospects Victor Hugo Silva and Nathan Batista.

The 23-year-old Praia made his pro debut in 2011 and scored his first six wins by some form of knockout before suffering a submission loss to future UFC fighter Dileno Lopes in his seventh fight. Praia rebounded by avenging the loss and scoring the TKO finish of Lopes in his eighth bout and then tacked on another three wins, including two more stoppages by way of knockout or TKO. The Team Nogueira fighter has only gone the distance once.

This fight has the potential to be a wild battle. Praia could be more vulnerable on the ground, where he suffered a submission loss and Linhares has picked up four wins. He’s not especially good from the bottom, but his takedown defense and scrambling abilities are adequate. Still, he could use an upgrade in this area. Praia is at his best on the feet, where he fights long and uses a high frequency of kicks. When he senses an opening, he can land precision punches in a hurry and suddenly change the course of a fight.

Linhares took on an even longer fighter in the aforementioned Batista and handled himself well. He remained out of range, only closing the distance to unleash his own combinations or clinch up for a takedown. His takedowns aren’t always very strong or technical, but his persistence and timing pay off. He can be a bit of a grinder on the ground, where he’s content to work from the guard, but he will look to advance position after wearing his opponent down.

This stacks up as a battle between the takedowns of Linhares and the quick and sometimes vicious striking game of Praia. If Linhares can time Praia’s kicks and catch the striker off balance, this fight will play out in his world. If Praia is able to stuff those takedowns, he’s quite capable of answering back with a barrage of punches and kicks that might be too much for Linhares to handle.

Praia is a much quicker and more aggressive striker than Batista, who offered little offense against Linhares in their battle. The 23-year-old prospect has to be careful not to telegraph his kicks, or he’ll suffer the fate of landing on his back on the canvas. Linhares has demonstrated impeccable timing, though, and he can hold his own against longer strikers. Praia’s reliance on kicks might be his downfall, with Linhares ducking under and scoring multiple takedowns. However, as in his fight with Batista, Linhares will grind away until he can find the finish late in the fight.