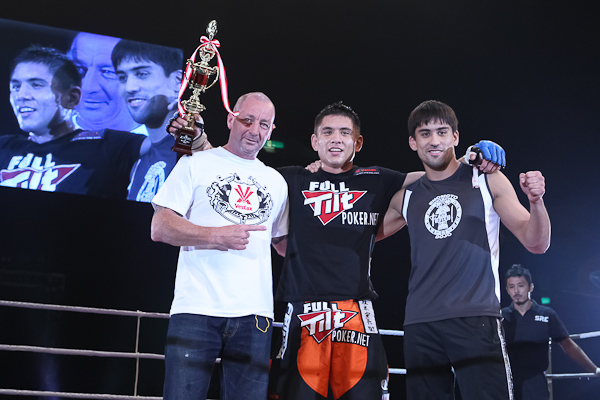 The Fight Nights Global promotion is back with its 74th effort. The Russian-based promotion appears to be in fine form with this lineup, which includes a clash between Nikolay Aleksakhin and disgraced The Ultimate Fighter 21 alum Mike Graves, an interesting scrap between veterans David Khachatryan and Ivan Musardo, and the first FNG appearance of Chinese women’s MMA prospect Bo Meng. There’s also one welterweight fighter with the opportunity to prove that he’s a legit prospect. That man is Aliaskhab Khizriev, who meets Yasubey Enomoto in one of the evening’s top-billed contests.

Enomoto is a well-rounded fighter who holds a brown belt in Brazilian Jiu-Jitsu and also has a background in Muay Thai. He is decorated in both sports, with an IKBO Thaiboxing championship and a slew of European grappling medals among the highlights of his resume. The Swiss fighter has been toiling around the European, Japanese and Russian MMA scenes since 2006, but he has struggled to put together an extensive winning streak. The former M-1 welterweight champion and Sengoku veteran has never won more than three fights in a row. Since his 2013 loss to Albert Tumenov, who vaulted to the UFC with the victory, Enomoto has scored five victories and suffered four losses. The 33-year-old was able to submit Shamil Zavurov and decision Igor Svirid, but he also stumbled against Alexander Shlemenko, Aslambek Saidov, Vladimir Mineev and fellow FNG 74 participant Aleksakhin. Overall, Enomoto has notched five submissions and one knockout, but, win or lose, he has more often gone the distance.

Khizriev has had a much quieter rise through the regional ranks. He debuted in 2014 and competed on the fourth season of the MixFighter series. His October 2015 TKO finish of Dzhamal Magomedov marked Khizriev’s first win over an established fighter. While he did return to fights against less-experienced foes, the Russian did hand out one more defeat to a veteran fighter when he stopped Matej Truhan with a body-blow knockout in just 28 seconds in his most recent affair.

Enomoto does have a dangerous grappling game that has led to five submission wins and contributed to an additional 10 decision victories. He has a solid striking arsenal, too. However, his biggest asset may be his experience against high-level competition. While Enomoto has faced the likes of former Bellator champ Shlemenko, former KSW titleholder Saidov, Strikeforce and Bellator vet Tyler Stinson, M-1 titleist Zavurov (four times) and UFC vets Tumenov, Rashid Magomedov, Sanae Kikuta, Rashid Magomedov and Keita Nakamura, Khizriev has encountered very few fighters of this caliber. In fact, his best two adversaries, Dzhamal Magomedov and Truhan, had combined for just a 20-9 mark going into their fights with Khizriev and now sport a combined 21-14 record.

Khizriev is always a threat to finish fights with his fierce striking. He’s stopped numerous opponents early in the first round. However, Enomoto has been faced with plenty of tough fighters. He has defeated Zavurov in three of their four encounters. “The Swiss Samurai” also disposed of Kikuta and handed the first career losses to former undefeateds Khusein Khaliev and Abubakar Vagaev. Enomoto doesn’t tend to lose two in a row — it only happened once, early in his career — and he’s coming off a loss, so Khizriev is in a bad spot here. The Swiss fighter should hand out another first career loss when he meets Khizriev. While it’s possible Enomoto finds a submission, it’s more likely that this fight goes the distance.

Absolute Championship Berkut has definitely topped its Russian cohorts over at FNG with the lineup for its 71st event. The card is stacked with very successful regional veterans and plenty of prospects. The headliner pairs bantamweight titleholder Petr Yan against undefeated challenger Matheus Mattos.

The 24-year-old Yan debuted in 2014 and worked his way to a tournament championship in 2015 with victories over veteran Renato Velame in the quarterfinals, newcomer Kharon Orzumiev in the semis and fellow prospect Murad Kalamov in the finals. He suffered a loss to Magomed Magomedov in a bid for the vacant ACB bantamweight title, but he bounced back with a decision over Ed Arthur to earn a rematch with Magomedov. “No Mercy” fared better in the second go-around, where he was able to edge Magomedov on the scorecards. Yan has two victories by way of strikes and one win via submission. He has put together an impressive resume in a short time, but the Tiger Muay Thai and Russia Top Team fighter has trended toward stoppage victories against inexperienced opponents while going the distance with the veterans he has met, including the aforementioned Kalamov, Magomedov and Arthur.

Yan’s Brazilian opponent, Mattos, has yet to officially taste defeat. The 25-year-old debuted in 2011 and went 6-0-1 with six stoppages on the Brazilian circuit before landing in the Jungle Fight promotion, where he quickly added two more finishes. Mattos then landed a spot on The Ultimate Fighter: Brazil 4, where he defeated Jose Marcos via strikes and then lost on the scorecards against Reginaldo Vieira. The young prospect returned to Jungle Fight and notched two more stoppage wins before traveling to Russia for his ACB debut in April. At ACB 57, Mattos decisioned Magomed Ginazov. The Team Nogueira fighter has scored six knockouts and four submissions.

This should be a very competitive fight. Mattos delivers a lot of power, but he has lapses in judgment that lead to bad spots where he has to defend against a fighter who has taken his back. Yan has had some of the same struggles, as was evident in his first fight with Magomedov. Each fighter is quite capable of turning the tide and making adjustments. Mattos did so in his scrap against Eduardo Souza at Jungle Fight 85, where Souza took Mattos’ back in the first stanza but was ultimately knocked out in the second frame. Yan’s ability to adjust took longer. The Tiger Muay Thai fighter was in a competitive first fight with Magomedov that resulted in a split-decision loss, but he took all three scorecards in their rematch.

Ultimately, Yan appears to have the more refined game. He has power, but he’s also able to convert trip takedowns with ease and could put Mattos in some of those familiar bad spots. Yan has also shown the heart and stamina to last five tough rounds with the likes of Magomedov. Mattos couldn’t quite hang with the aforementioned Vieira in a two-round affair, so it’s possible that Yan will outwork the Brazilian if this fight goes the full 25 minutes. Mattos will flash some of his power, but it won’t be enough to sway the judges in his favor. This should be a successful title defense for Yan.

Enough about Russia, let’s talk about Brazil for a minute. Jungle Fight’s 92nd offering brings together quite the cast and features three title bouts. The vacant flyweight title will be on the line when Denis Araujo meets Bruno Menezes.

Araujo has fought as a pro since 2012 and streaked out of the gates with 10 victories before suffering his first and only loss. “Três Dedos” trains out of BH Rhinos and has eight stoppage wins. He has five knockouts and three submissions. Araujo’s most notable victory came in an XFC International tournament when he defeated José Vagno Soares, who was 11-1 coming into the fight. He also topped the formerly undefeated Leandro Soares in a flyweight showdown at Jungle Fight 91 in July. His lone loss came against Deiveson Figueiredo, who went on to join the UFC roster after one additional victory. Araujo bounced back from the Figueiredo loss by notching a win over Fabiano Moreira and then decisioned the aforementioned Soares.

The 32-year-old Menezes has been a pro fighter since 2007. “The Talent” got off to a rocky start in which he won just nine of his first 14 fights. His losses during this stretch included a knockout at the hands of Pedro Nobre and a submission courtesy of Wilson Reis. It all finally clicked for Menezes in 2012 when he handed Mateus Vasco the first loss of the “Pitbull’s” career. Menezes tacked on another six victories while facing increasingly difficult and more experienced opponents. He was the first man to beat up-and-comer Rafael Dias. Then, he edged 7-2 fighters Diego Duarte and Nildo Nascimento on the scorecards, with the latter win coming in a Jungle Fight flyweight title affair. Menezes defended his strap with a first-round knockout finish of Jose Alexandre, but he missed wait for his next scheduled defense against Paulo Oliveira. The Oliveira fight was scrapped and Menezes relinquished the title while also going on hiatus for two years. This will be the former champ’s first fight since his botched weigh-in at Jungle Fight 84 in 2015.

Araujo, despite a fairly even amount of knockout and submission wins, looks more comfortable on the feet. The BH Rhinos fighter uses feints and a busy in-and-out style of movement while working stand-up. Menezes has compiled a respectable resume, but his losses to Nobre and Reis are joined by a pair of defeats against Jurandir Sardinha and a loss to Leonardo Carvalho.

Menezes has out-worked some veteran opponents, but he’s no world-beater. Araujo has demonstrated far more consistency while only suffering a loss to a future UFCer. Araujo has also remained active, whereas Menezes has been gathering ring rust. This could be the difference between the two competitors. These guys have plenty of knockouts to their collective credit, and Araujo should add another one to his list this weekend.