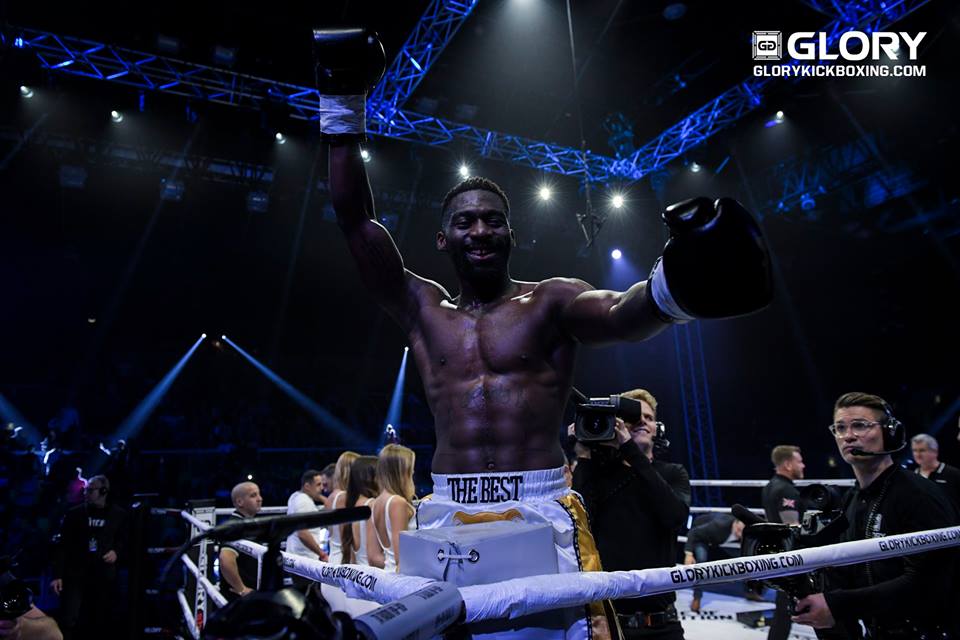 On Saturday, June 22, GLORY Kickboxing holds its biggest event of the year from the Zénith de Paris – La Villette in Paris, France.

The GLORY 66 main event features multiple-time welterweight champion Cédric Doumbé, who puts his belt on the line in his home country against Azerbaijani fighter Alim Nabiyev. The pair met previously at GLORY 51, where Nabiyev claimed victory by split decision. Doumbé recaptured the belt with a second-round finish of Harut Grigorian in March to set up this rematch.

Two other belts are on the line at the event. Women’s super bantamweight champion Anissa Meksen defends her crown against Sofia Olofsson in the co-headliner. Earlier in the evening, light heavyweight titleholder Artem Vakhitov headlines the SuperFight Series against challenger Donegi Abena.

In the welterweight championship bout, Cédric Doumbé looks to avenge his loss to Alim Nabiyev and remain the titleholder. Can Doumbé secure his third title defense, or will Nabiyev become the fourth champion in the past two years?

Doumbé, 26, has been a prominent figure in the welterweight division since defeating longtime GLORY champ Nieky Holzken to cap off his award-winning 2016 campaign with his 11th win in 12 bouts. The top-ranked welterweight has won 17 of his last 19 fights, including four straight against Thongchai, Alan Scheinson, Jimmy Vienot and Harut Grigorian, the latter of which was a title win GLORY 64. His combination of a brash personality, entertaining fighting style, and superior technical ability has birthed a star for GLORY. His resume speaks for itself, with 70 career victories, 41 knockouts, and just six losses.

Nabiyev has been impressive since debuting with GLORY in 2017. Victories over former GLORY champions Nieky Holzken and Murthel Groenhart, former FFC champ Eyevan Danenberg, and the aforementioned Vienot highlight his five victories in his six GLORY contests. The Azerbaijani kickboxer fell short in his first title bid against the aforementioned Grigorian, but he earned a second chance for gold following back-to-back wins over Danenberg and Groenhart to set up the rematch. Nabiyev made noise prior to his GLORY career with victories over top-ranked competitors Zhang Yang, Vladimír Moravčík and Chad Sugden. In 53 fights, Nabiyev holds 46 wins and 20 knockouts. Since 2014, he has gone on an impressive run of 14 wins in 16 bouts.

Nabiyev should be confident heading into his rematch. In their first encounter, he came across as the more imposing fighter by pressing forward for much of the fight. His ability to use his length to control the distance opened up opportunities to land his strikes. Doumbé fought on the ropes, looking to counter with his boxing and low kicks, but Nabiyev did an excellent job of blocking the kicks behind a high guard, setting up his own counters with his pressure and head movement, and ultimately overwhelming Doumbé in the latter rounds. As Doumbé’s movement began to slow in the third frame, Nabiyev was able to settle in and pick his shots, particularly the right jab from southpaw and beautiful knees up the middle.

This bout is the definition of what a highly skilled technical battle is supposed to look like. Doumbé loves to use his movement, superior defense, and diverse attack to make his opponents look foolish. Nabiyev will be able to keep up with Doumbé in every facet of the game, which will make for one of the most interesting welterweight title fights in GLORY history.

Meksen has cemented herself as the most dominant kickboxer in any division of the women’s ranks following an incredibly successful career that features 98 wins, 31 knockouts, and just four losses in 101 fights. The 31-year-old has won 20 of her last 21 bouts, with her lone defeat coming in one of the worst decisions in GLORY Kickboxing history. Her resume features victories over former GLORY champions Tiffany van Soest and Jady Menezes, Bellator Kickboxing title challenger Gloria Peritore, Iman Barlow, Amel Dehby, Ashley Nichols, Eva Naranjo, Mario Lobo, Meryem Uslu and Fatima Pinto, the latter of whom holds two victories over Olofsson.

Olofsson has dominated the amateur ranks over her eight-year career, but recently started to make moves on the pro scene. She scored a huge win over the aforementioned Barlow, a top pound-for-pound kickboxer, in 2017 that caught the eye of many in the sport. Following the victory, Olofsson won her second IFMA world tournament championship in May 2018. The win was more than enough to garner interest from GLORY, which was seeking talented females for its super bantamweight division. Following a split-decision loss to van Soest in her debut, the challenger picked up two straight victories over Cindy Silvestre and Christi Brereton at GLORY 60 and GLORY 65, respectively.

This championship bout will be Meksen’s second attempt at defending her title since regaining the strap. Her next challenger offers an intriguing stylistic match-up. Olofsson doesn’t take a backwards step. The Swedish Muay Thai stylist has an endless gas tank, presses forward with a strong left kick and powerful boxing, and throws a rarely matched volume of strikes. Meksen employs a high-volume approach with one of the most diverse striking arsenals in the sport.

The fight will be determined by who can control the pace, counter effectively, and — maybe most importantly — control the range at which they operate. The distance control and defensive abilities of Meksen will be an important factor in deciding if she can score her third successful title defense and 99th career victory. However, she should have her hand raised after five rounds of action.

The long-reigning GLORY light heavyweight king hasn’t fought in 10 months, but his resume of has kept him in the pound-for-pound rankings until this past month. The Russian has a decorated resume that features three IFMA world championships, a World Combat Games gold medal, WMC heavyweight world title, and numerous Russian and European amateur championships. Since losing to former GLORY middleweight champ Simon Marcus in 2011, Vakhitov has reeled off 15 wins in 16 bouts. He took the final two bouts against former champion Saulo Cavalari to secure their trilogy.

Despite his dominance over the last eight years, Vakhitov struggled in his most recent bout against former It’s Showtime 95-kilogram champion Danyo Ilunga. The discussion surrounding the judges in Denver ran rampant following back-to-back championship bouts with controversial decisions, especially following the Meksen/Menezes title bout. The showdown between Vakhitov and Ilunga was a great back-and-forth contest that featured moments for both fighters. This is where Abena hopes to take advantage of a similar game plan to neutralize the excellent striking of the titleholder.

If the 22-year-old challenger take the crown, he will become the youngest champion in GLORY history. The Surinamese-Dutch kickboxer has made a splash in the sport in just a few years. After successful back-to-back first-round knockouts in his Final Fight Championship run and a dominant victory over former top-10 kickboxer Andrei Stoica, Abena entered the AIWCC Champions League heavyweight tournament, where he was matched against two-division Enfusion champion and current GLORY light heavyweight contender Luis Tavares in the opening round. Despite being the far less experienced competitor, Abena handed Tavares only his seventh defeat in 67 pro bouts following a hard-fought, extra-round unanimous decision. Abena went on to defeat Adnan Rezovic by second-round knockout in the semifinals. However, he fell to Germany’s Mohamed Abdellah by decision in the final. Shortly after the loss, Abena made a successful GLORY debut against Stephane Susperregui at GLORY 60. He earned his shot at the title with a split-decision victory over 10th-ranked Michael Duut at GLORY 64 in March.

Abena should offer an intriguing challenge for the champion. The challenger loves to pressure his opponents with his boxing, especially his monstrous hooks to the body. Abena steps forward with his hands, a high-volume attack of power punches, and uses his kicks to reestablish his legs when needed.

Vakhitov is a skilled boxer in his own right. In fact, he is a complete kickboxer that doesn’t solely rely on one style or approach to fighting. He is capable of fighting in a multitude of ways, including everything from aggressive forward pressure behind a jab and high guard to using head movement and footwork to open up his kicks and punches. Vakhitov will absolutely be able to match Abena blow for blow, which makes this fight even more dangerous for both men should it take place at boxing range. Yet, Vakhitov’s major advantage in this contest is his counter-fighting ability.

If Abena gets too aggressive early on, he will start to open himself up to counters from Vakhitov, who is rightfully a favorite heading into the contest. This status could change with one or two clean punches, though. However, Abena will be fighting an uphill battle against an opponent who has never been knocked out with strikes in his professional career.