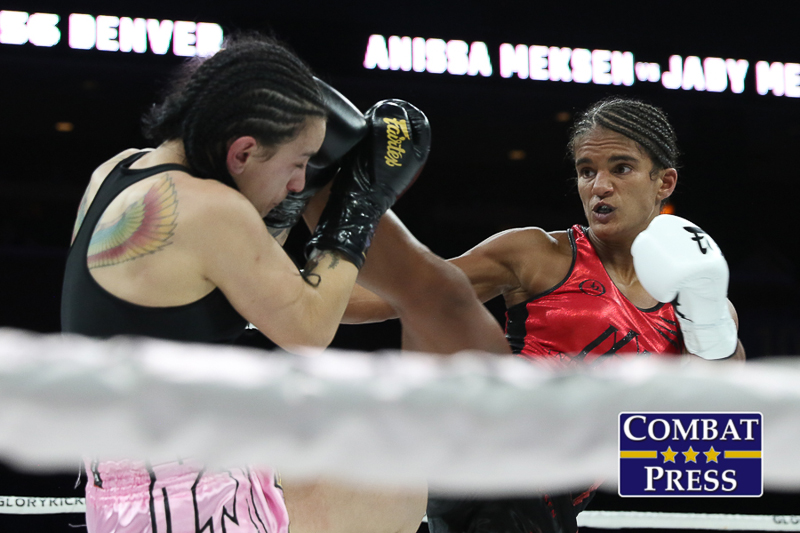 Robbery of the Year – Jady Menezes vs. Anissa Meksen (GLORY 56)

Every year, the Robbery of the Year award is a reminder of how much room there is to improve judging in combat sports. Unfortunately, 2018 may have produced one of the worst decisions in combat-sports history.

For comparison — and we’ll stick with results that are still mentioned regularly by fight fans — this year’s robbery is on par with the first fight between Saul “Canelo” Alvarez and Gennady Golovkin, or the UFC 112 bout between Frankie Edgar and B.J. Penn.

When Frenchwoman Anissa Meksen stepped into the ring at GLORY 56: Denver in August, the question for most kickboxing fans was whether the sport’s consensus No. 1-ranked female pound-for-pound fighter would simply cruise to a decision or if she could put away Brazilian Jady Menezes in the pair’s second meeting. It seemed like a foregone conclusion that Meksen, competing in her 100th career bout, would retain her super bantamweight title against a less-experienced foe that she had already beaten.

Over the course of five rounds, Meksen dominated Menezes, capitalizing on the challenger’s aggression with repeated counters. Meksen frequently unleashed knees from the clinch, battering the midsection of Menezes. From range, Meksen utilized her front kick to keep her distance and prevent Menezes from landing any of her looping punches. Menezes lasted to the final bell, but the judges’ decision was just a formality, right?

Wrong. One of the judges scored the fight 50-45 for Meksen — the same score this writer had sitting at ringside — while the remaining two judges had it 48-47 for Menezes. Meksen left the ring in disgust and the crowd booed in anger.

Simply put, this is the worst kickboxing decision I have ever witnessed. I have lived in Colorado my entire life, and while the commission is not the best in the country, it’s far from the worst. But as I sat in the arena in disbelief, I couldn’t help but ask what in the hell the other two judges had watched. When I returned home from the event, I immediately re-watched the fight and guess what? Still 50-45 for Meksen. Ask anyone, whether they’re a kickboxing fan or not, and I’d wager they’d give Meksen every round. To this day, I cannot wrap my head around the result.

As you can guess, there wasn’t any debate with our staff on this award. In fact, we didn’t even discuss other candidates, because this fight is in the conversation for the biggest robbery of all time. On the bright side, GLORY did Meksen right, giving her an immediate rematch against Menezes at GLORY 61: New York. She didn’t let the judges have a say in that fight, demolishing the Brazilian inside of two rounds to recapture her belt and right the wrong from the Colorado judges.