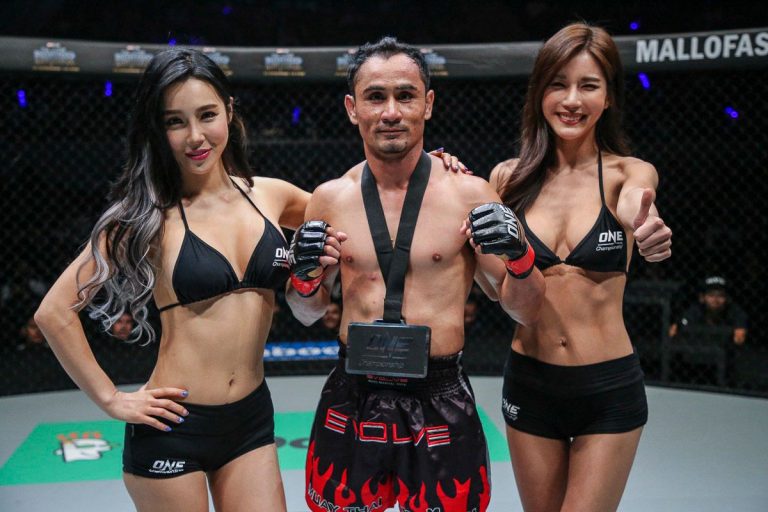 ONE Championship: Battleground Preview and Predictions

After going six weeks without an event, ONE Championship returns on Friday, July 30. ONE Championship: Battleground will feature six match-ups. This event includes a variety of storylines including, a potential passing of the torch in the main event, Aung La N Sang returning with a vengeance, and 16-year-old Victoria Lee looking to improve to 2-0.

The main event will put the spotlight on two of the best Muay Thai fighters in the world. Strawweight champion Sam-A Gaiyanghado looks to defend his belt against promotional newcomer Prajanchai. Both have made a name for themselves off Muay Thai, but their main difference comes in age. At 37 years old, Sam-A must hold off another young challenger with the title on the line.

In the co-headliner, N Sang takes on Leandro Ataides. After being a two-division champ, N Sang lost both of his titles to Reinier de Ridder in a span of six months. He now has the opportunity to start his journey back to a title shot. On the contrary, Ataides finds himself in a similar position. Ataides had won three straight fights before losing his last match-up against De Ridder. Both fighters want to get revenge on the champion, but only one can take the next step forward.

ONE Championship: Battleground can be seen in its entirety on the ONE Super APP in much of the world and B/R Live in the U.S. starting at 8:30 a.m. ET.

The strawweight Muay Thai championship is on the line in the main event. Who walks away with the title and how do they get it done?

Sam-A is widely considered to be one of the best Muay Thai fighters of all time. Holding a record of 370-47-9, Sam-A has held championships for several different weight classes. He has now won his last three fights and finds himself against the newest addition to the strawweight division.

Prajanchai signed with ONE Championship nearly two months ago. With that being said, he is a world-class talent holding a record of 337-51-3. Prajanchai will have the opportunity to become the champion in his promotional debut and boost himself into superstardom using their platform. Will the champion remain the champion? Or will Prajanchai force a passing of the torch by dethroning the king?

Sam-A vs. Prajanchai may end up as the best Muay Thai fight of the year. Prajanchai has a speed advantage, but Sam-A has devastating power that might cause trouble. Sam-A needs to find a way to control the distance without walking into Prajanchai’s counter striking. All things considered, Prajanchai should be able to avoid Sam-A’s power and win the fight by beating his opponent with volume.

Former champion Aung La N Sang has dropped back-to-back fights to Reinier de Ridder. Does he get back on track this weekend against Leandro Ataides?

Training out of the Sanford MMA gym, N Sang has had quite a successful MMA career. Since joining ONE Championship in 2014, he holds a promotional record of 11-3. After becoming the champion at middleweight and light heavyweight, N Sang looked unbeatable. Unfortunately, he lost both titles to De Ridder in only six months. With his sights set on revenge, he starts his journey back to the title on Friday.

Ataides has had his ups and downs while fighting for ONE Championship. After winning his first two fights by first-round knockout, Ataides ended up losing three straight fights. Luckily, Ataides stayed focused and bounced back with three straight wins. Holding a promotional record of 5-3, Ataides had his momentum cut off when he lost to De Ridder over a year ago. He now looks to get back on track against the fan-favorite N Sang.

This is a stylistic masterpiece with the potential to steal the show. Both fighters have knockout power but use it differently. N Sang tends to take a slower approach with his striking and calculates everything before attacking. On the contrary, Ataides tends to get wild at times and go all-out for the finish. Ataides has the power to stop anyone in the division, but N Sang is too solid defensively to pick against. The former champion should be able to control the distance and set up opportunities to get the finish.

There are a pair of women’s atomweight fights on the card. Which woman delivers the breakout performance of the event?

At 16 years old, Victoria Lee has the potential to evolve into a world champion. Not only is she extremely young, but Lee is also related to two ONE champions, Angela (sister) and Christian (brother). Lee made her highly-anticipated pro debut in February of this year. She managed to exceed expectations and finished the fight by submission in the second round. Lee has a long way to becoming a world champion, but another win will be a huge step in the right direction.

Lee is expected to win this fight, but her opponent, Luping Wang, will not go down easy. After losing her first two MMA fights, Wang bounced back with three straight wins. Wang now looks to take advantage of Lee’s lack of experience and steal the shine. Lee could be set for a breakout performance if she can stop Wang’s momentum with another finish. At the end of the day, it is hard to take the spotlight away from a 16-year-old building toward becoming a world champion.

The women’s atomweight fight between Ritu Phogat and Heqin Lin.

Phogat made her pro debut with ONE Championship at the end of 2019. She quickly made a name for herself by winning her first four fights. Phogat ended up getting a step up in competition two months ago against Bi Nguyen. Unfortunately, Phogat was on the wrong end of a controversial decision that could have gone either way. She now looks to get back on track.

On the other side of the cage, Lin has the opportunity to make a statement in her second fight with the promotion. Lin signed with ONE in March 2019 with a record of 13-2-1. Despite fighting opponents with little experience, Lin looked impressive in her promotional debut against Jomary Torres, finishing the fight by first-round submission. Nearly two and a half years later, Lin has the opportunity to use Phogat as a stepping stone.

Both fighters have well-rounded skills and tend to finish their fights. The x-factor in this matchup is the difference in why they need a win. Phogat recently got her first loss this year and wants to rebound immediately. On the contrary, Lin is on an 11-fight win streak but has not fought in over two years. Each fighter should come out firing with an urgency to get a win. Will Phogat bounce back from her first pro loss? Or will Lin return by using Phogat as a stepping stone?