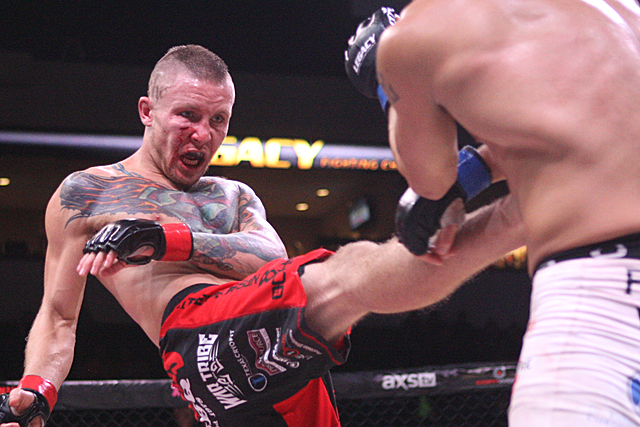 LFA 1’s Steven Peterson: The Evolution of ‘The Ocho’

June 18, 2004 is a day in history that may not ring a bell for most people. However, that was the day that the classic comedy movie Dodgeball was officially released. As a frame of reference, that was the day before UFC 48, which featured Ken Shamrock, Kimo Leopoldo, Frank Trigg and Georges St-Pierre, who was competing in only his second UFC outing. It was also the event at which Frank Mir snapped Tim Sylvia’s arm to capture the heavyweight title. That was a great weekend in both movie and fighting history.

In Dodgeball, the competitions took place on an obscure network that was coined ESPN 8, The Ocho. At this same period in time, mixed martial arts was still gaining traction as a respected sport, and while it was only really available on pay-per-view, one could only imagine that any mainstream television contract would have been on a lesser-known channel like the fictitious ESPN 8. Well, times have changed.

Dodgeball is now a classic, ESPN has many more than eight variations, MMA is becoming a mainstream sport with several promotions having big television contracts, and Steven Peterson, who was only 14 when that movie was released, is now fighting for a bantamweight unification title in the newly formed Legacy Fighting Alliance.

Peterson had a rough childhood, and, if asked what he was doing in 2004, his response would be that he was likely in a fight — probably not under the best of circumstances. However, he is a natural-born fighter, which has helped make him the man he is today.

“I grew up in California [and] got in quite a few fights out there,” Peterson told Combat Press. “Then I moved to Texas, when I was 15, with my family, and I never really fit in, so I ended up getting in a lot of fights because of that. On the football team, I was number eight, so some of the guys picked on me. I got in a fight, and they called me ‘Ocho.’ That name spread throughout the school, and I became known as ‘Ocho.’

“I was known for fighting, so I started a little fight club in my backyard when I was probably 16 or 17. I just had kids come over from school, and we would go at it. I started to grow a liking for the thrill of a battle, and I decided I wanted to start training. Thirty days later, I had my first amateur fight. I lost, but I knew it was what I wanted to do. I put everything I had into it, won my next five, went pro, and here I am.”

In June 2016, a full 12 years after the release of Dodgeball, a different kind of “Ocho” had blazed a trail for himself. In his 18th professional fight, he was able to capture the bantamweight title in Legacy Fighting Championship. A few months later, it was announced that the Resurrection Fighting Alliance and Legacy were merging into one organization.

This Friday night at The Bomb Factory in Dallas, LFA 1 will kick off a new era in fighting. Peterson will be facing RFA champion Leandro Higo to create the first-ever LFA bantamweight title.

“I’m excited, man,” Peterson said. “It’s a big merger — a lot of publicity and a lot of eyes watching. I’m excited to be the main event on the card, and excited to be fighting for the unification title.”

While Peterson is riding a three-fight winning streak with four stoppages, the Brazilian Higo is no slouch either. Training out of the famed Team Pitbull in his home country, Higo brings a ton of experience and a well-rounded bag of tricks. Higo also participated in season four of The Ultimate Fighter: Brazil.

“He’s definitely a worthy opponent. He’s got an impressive record and he’s a tough guy — he’s got a black belt in BJJ,” Peterson said. “I just don’t think he matches up very well against me, and I’m the type of guy that doesn’t go away. I just keep coming, and I’ve got a game plan for this fight. And I think I’ll expose some of his holes and take him out pretty quickly.”

Peterson is also a worthy opponent. He has a very well-rounded training camp in the Dallas area. He trains between his home camp at Fortis MMA, stays in shape at Crossfit 380, and works on his striking with Arjan Carlos Moreno at Siam Star Muay Thai. Of his last four stoppages, two were by knockout and two by submission. Even at 26 years old, he has shown a great level of fighting intelligence.

Peterson has his sights set on a big future in the sport. His goal is not to be in some scrub promotion on ESPN 8: The Ocho. Fighting is his life, and he plans on making it to the big show by the end of the year.

“It’s my calling,” Peterson said. “I had no other choice. I’ve been fighting my whole life. When I found out I could fight and not get in trouble while also making a living, I put everything I had into it. It’s tough to make a living fighting, but now that I have so much experience in it, I can teach and do all sorts of things to make an income. Now, it’s my time to shine and make it to the next level.

“I need to be in the UFC, without a doubt. I plan on taking out Higo and then getting picked up and gunning straight for the top 10. I’ve been doing this for a while, and I feel I’m one of the best in the world. My four losses were all huge learning experiences, and I’ve grown immensely because of them. I’m not going there again. I’m headed up.”

If he eats “too many cookies,” Peterson might walk around at 165 pounds. However, he typically walks around lighter than that, which is intentional. He knows where he wants to be, and he knows how a lot of people get there. It is important to be able to make weight on short notice, and he already let the UFC brass know of his intentions.

When Peterson is not training or waiting for the call up, he is a full-time father to his son Keison. He hangs out with his girlfriend Audra and trains others at his gym, where he teaches kickboxing, as well as private classes. Life outside of the gym is pretty simple. Peterson stays focused on his career. On Friday night, he’s out to take his career to the next level.